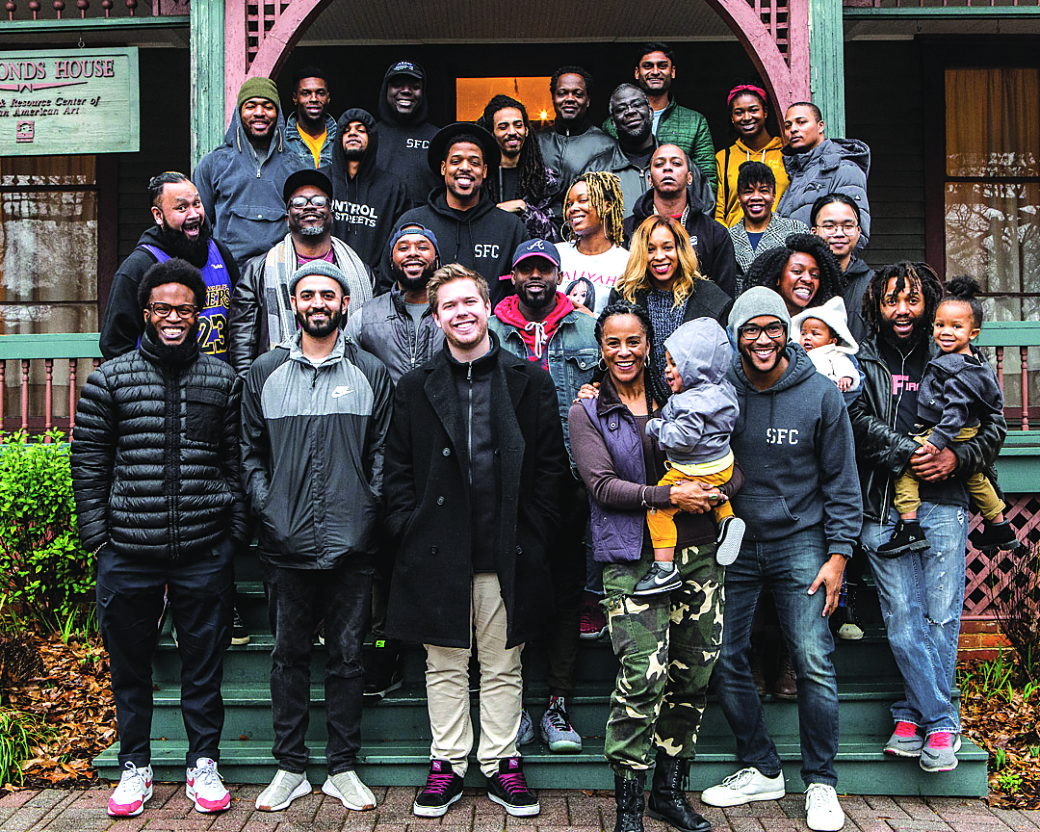 Since 2012, Soul Food Cypher has convened on the fourth Sunday of each month to showcase the positive and constructive role that rap music can play in shaping daily life. By concentrating on expanding consciousness through the craft and ingenuity of freestyle rap and spoken language, SFC builds structure by facilitating regular cyphers (a group of freestyle rappers rhyming in a cyclical motion, following each other’s lead) that foster creativity and a sense of camaraderie within the city’s underground hip-hop scene.

“Our aim is to provide Atlanta’s lyricist community with a safe and nurturing environment where their voices and artistry can grow,” says SFC’s executive director Alexander Acosta. “We look to solidify the art of freestyling as a genuine aesthetic to the wider artistic community and carry this rich tradition to the next generation.”

Acosta heads up SFC’s board of directors which includes fellow co-founders Zano Bathroom and Mark Montgomery, along with several other board members, including event manager and Savage Fam Entertainment co-founder MICxSIC.

February is a banner month for SFC, as the organization celebrates its eight-year anniversary. On Friday, February 7, the SFC team heads up Georgia 400 to Roswell, for the Roswell Roots festival, which is among the largest black history celebrations in the country. For one night of this month-long arts, literature, music, film, and culinary, celebration, SFC curates a live, Roswell-themed cypher at Barefoot Warehouse-Atlanta Workshop Players (8560 Holcomb Bridge Road, Suite 111, Roswell). It’s an all-ages event that kicks off at 7 p.m. Space is limited so advance RSVPs are encouraged.

On Sunday, February 23, SFC returns for its regularly-scheduled fourth Sunday gathering by hosting the 100 Cypher Event from 6-9 p.m. at Annex Bookstore (748 Marietta Street N.W.). For this event, the organization is launching its 100 Emcees campaign, calling on 100 emcees to join SFC’s membership of freestyle lyricists to uphold the craft of freestyle rhyming, and to push the art to a higher level.

“Recently, the craft of freestyle rap has all but fallen off the radar in hip-hop,” Acosta says. “This is a major loss for the culture because freestyling is the ultimate display of authenticity, individuality, ingenuity, and knowledge of an emcee. More simply, freestyling is simultaneously a true testament of an emcee’s skill and soul.”

And while SFC events are currently based in Atlanta, the organization’s ultimate goal is to foster 100 emcees in every major city across the country, who will use their talents to keep pushing the culture forward.

Expect an evening of cyphers and other freestyle rhyming events such as tournaments and more lyrical challenges to be announced soon.

Diamond Street Studios producer, guitar player, and singer Matt Greenia has a new project in the works called Rishathra, which is breathing new life into a batch of older songs that date all the way back to his high school years spent in Northern Michigan. “I wrote too many songs in 1995,” Greenia says. “They lived on alarm-clock cassette tapes until last year, when I found them and hired some musicians to finish them.”

With a new lineup in place that finds Greenia performing alongside drummer Jake Cook, bass player Aidan Burns, guitarist Alex Teich, and vocalist Nick Nickerson, Rishathra puts a modern spin on what Greenia calls “northern Michigan goth grunge from ’95,” which is finally seeing the light of day on a brand-new 10-song LP, titled Sex with Aliens. The band’s name is a term created by sci-fi author Larry Niven that describes exactly what the album’s title is all about.

“Last year, we recorded a legendary amount of music,” Greenia says. “This is the first album we’re releasing. These players showed up the most persistently, and that’s how Rishathra became a priority. They basically won my reality TV show!”

This debut offering bears the mark of Dude Hugs, a musical collective and talent house that Greenia created to act as a label and publisher for the artists with whom he’s working.

“For Sex with Aliens, Dude Hugs helped me pay day rates to the musicians,” Greenia says. “In exchange I traded tracking, mixing, and mastering. Nick got me to do Strange Truth, Jake got me to master I Bleed Pop by Seal Pup, and Alex got my help recording and co-mixing the as-yet untitled and unreleased Post Hunk record. … Everyone gets their projects done with lower budgets and less cash exchange by adapting to an egalitarian, neo artistic barter system instead of old-guard gatekeeping,” he adds. “Collective bargaining. Literally.”

On January 17, high-energy punk outfit Upchuck unveiled a new self-titled EP via the group’s Bandcamp page. This latest round of six bedroom recordings were captured by the group’s friend, Daniel Lane. Songs such as “FREEDOOM,” “Cross Fire,” and “Reaper” capture Upchuck’s live fury with much greater intensity than the group’s previously released 2018 demos. A full-length album was also recorded last year at Grey Cat Studios with Patrick Phillips, and is due out early next year. In the meantime, catch Upchuck on February 18 at 529 with Warish and Playytime.

Arbor Labor Union is back with its latest full-length, New Petal Instants, out February 7. After signing on with Sub Pop Records to release 2016’s I Hear You LP, the group brings it all back home to release this latest batch of songs via Athens-based Arrowhawk Records. The independent label, which is owned and operated by Riot Act Media publicist Alyssa DeHayes, also recently released Insignificant Whip, by Atlanta’s soulful indie rock outfit Shepherds.

Last month, CL’s Music News column noted that saxophonist Jeff Crompton (alto), Ben Davis (tenor), and Bill Nittler (baritone) of the Edgewood Sax Trio will be performing with avant-garde absurdist Reverend Fred Lane and his Disheveled Monkeybiters at this year’s Big Ears Festival March 26-29 in Knoxville, Tennessee. Fellow ATLien’s W8ing4UFOs will be a part of this year’s activities as well. The group is playing two shows at the Pilot Light — Friday night, March 27, and Saturday afternoon, March 28. Times will be announced soon.