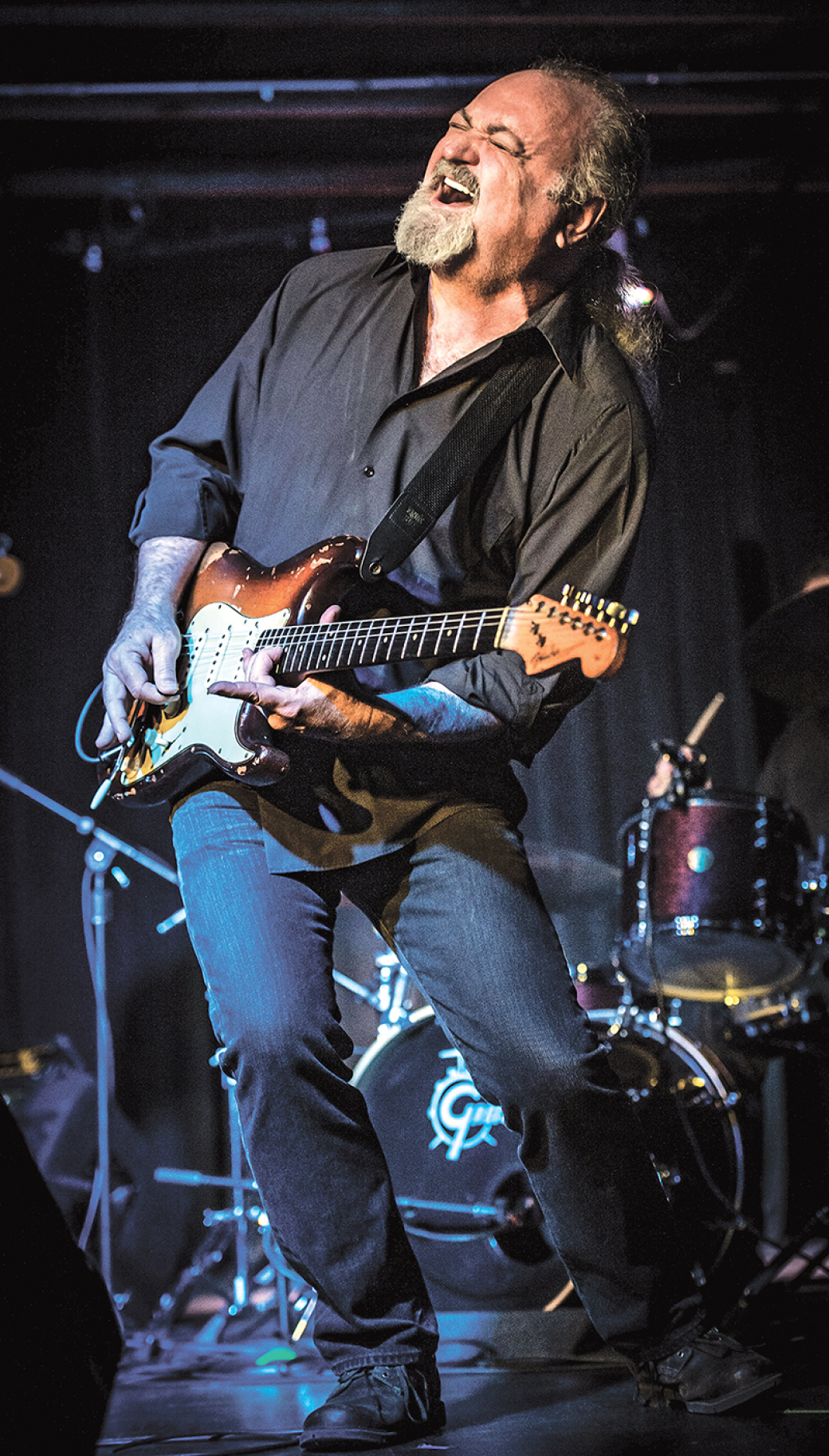 “I’m a workaholic,” laughs veteran Atlanta blues-rock guitar icon Tinsley Ellis when asked if he’s taking it easy around the Christmas holidays. Anyone who has followed his four-decades-long-and-counting career has already figured that out.

First with the Alley Cats, then The Heartfixers, and finally in 1988 as a solo artist, Ellis has seemingly played every Atlanta venue with a stage, multiple times, either as the member of a band, working with other showmen like Col. Bruce Hampton, or fronting his own ever-changing band over the years. Along the way it’s safe to say he has logged more miles on vans than any other Atlanta-based roots musician. And that’s not including international touring. Somehow, between the near-constant road work he has released close to 18 albums of predominantly original material; most for the major indie blues label Alligator, some for Telarc, and even a handful self-issued on his own Heartfixer imprint. As of 2018’s Winning Hand he’s back on Alligator with his latest, Ice Cream in Hell, streeting at the end of January.

While there is no doubt this is another offering of tough, soulful, red clay blues rocking, Ellis considers it the most raw sounding, guitar-drenched album of his career. He explains that while there aren’t a lot of overdubs, “it seems that the guitar is more in the forefront of this one.” Of course that’s what his longtime listeners want to hear, either live or in the studio. “It’s hardly a departure stylistically,” Ellis says. “You can never go wrong making an album for the fans.”

The provocatively titled Ice Cream in Hell is a sizzling slice of the gutsy, meat-and-potatoes blues, rock, and soul Ellis has always provided, made additionally potent by the recording process. “This one is more live in the studio,” he explains. “We added a couple of extra guitar parts after the fact, I worked on the solos and fixed some of the vocals, put horns on two songs … but this one feels live.”

The basic recording was done in only two days, which may account for the immediacy of the performances. It helps that Ellis records rough versions of every song before he hits the studio. “I’m such a control freak. The songs are mapped out the way I hear them. I demo all the songs … I play all the parts and actually put horns in the form of samples.” From the Latin-tinged Peter Green/“Black Magic Woman”-styled approach of “Everything and Everyone” to the R&B groove underpinning the title track and the wah-wah, Cream-influenced “No Stroll in the Park,” he and co-producer Kevin McKendree — who has played on every Ellis album since 1997’s Fire It Up — have crafted another diverse yet focused entry in a bulging and impressive catalog with few if any weak titles. “The albums sort of produce themselves but Kevin is especially good with recording and mixing. He doesn’t put anything on that will be an embarrassment 20 years from now.” Ellis points to classics that producer Tom Dowd (who he worked with) helmed as an example of what he’s after. “The Allman Brothers or Derek and the Dominos, he just captured the way they sound. They’re very live with nothing that’s dated.”

Ellis leaves his road band behind for the studio recordings with McKendree. Instead he uses musicians that also support high-profile stars like Buddy Guy, Delbert McClinton, and Brian Setzer. “They play together in lots of bands … sort of Nashville’s roots music A-team. They play like a unit … like when Albert King would record with Booker T. & the M.G.’s … and they just knock it out.” Ellis also tries to keep the same backing musicians on tour, something that’s unusual in the blues world. “I hire them based on the fact that they’re going to be staying with me for a while. They know what they’re getting into, you can look at the schedule,” he laughs.

It’s a demanding life for the 62-year-old Ellis, who is planning to go out for 60 shows in under three months, promoting the new record. Like the rest of us, he isn’t getting any younger. I mention that some musicians don’t feel comfortable when they are off the road, itching to get back, and wondered if he connected with that too. “I’m not at all close to being done touring but … the grass is always greener. If I’m at home, I’m thinking about getting back on the road. If I’m on the road, I’m thinking about getting back on my sofa. That’s part of the wandering nature of the blues artist … we always have the ‘something’s missing’ feeling.”

Perhaps that’s just the curse, or blessing, of being a workaholic. Ellis looks to one of his musical influences to put it in perspective. “Muddy Waters said it best when he sang ‘I just can’t be satisfied.’”
Treat your valentine, or yourself, to these February Blues and Beyond highlights.

Friday, February 7
Los Lobos, City Winery. Not just another band from East L.A., Los Lobos recently celebrated four decades of making stirring, often rocking roots music with durable strains of blues and Mexican folk. Their shows range from inspired to disappointing (like the last time they played this venue, leaving after 80 minutes), but when they’re on, there are few acts better.

Saturday, February 8
Joan Osborne, City Winery. Anything roots singer Osborne wraps her sultry, husky pipes around comes alive with soulful intensity. Her most recent album of Dylan covers was three years ago, but with a thick catalog that features R&B, country, gospel, pop, and rock, she has plenty of material to tap into, all of it worth hearing, especially live.

Saturday, February 8
Ron Pope/Caroline Spence, Terminal West. Since Pope was raised in Marietta, this is a homecoming for the soulful, singer/songwriter folk rocker. He even titled his 2012 album Atlanta. Pope’s youthful voice and heartfelt songs boast big choruses and room-filling hooks even as his introspective lyrics explore often dark emotional depths. Arrive early for Spence whose 2019 Mint Condition release was one of Americana’s finest.

Sunday, February 9
Amanda Shires, Variety Playhouse. While Shires is justifiably proud of her fiddle and vocal work supporting husband Jason Isbell, her own music — which is quite different than his — is just as vital. Like the similarly styled Neko Case, Shires mines a darker indie, roots vibe on her latest album; it’s singer/songwriter-based but occasionally edges into experimental territory and can also explode into somewhat surprisingly tough rocking.

Sunday, February 9
Davy Knowles, Vista Room. The ex-Back Door Slam frontman is back after his Rory Gallagher tribute, diving into his own soulful blues rock. Gutsy vocals, riff-heavy blues guitar, and tough, rocking songs has made world-class guitarists such as Peter Frampton and Joe Satriani rightfully sing his praises.

Tuesday, February 11
Dustbowl Revival, Aisle 5. This horn-enhanced sextet will need to cram onto the small stage at this venue as they promote their new Is It You, Is It Me release. The LA-based group’s swinging roots are heavily influenced by The Band’s eclectic Americana. In frontwoman Liz Beebe they have a soulful singer who adeptly handles the diverse, organic musical palette of folk, blues, gospel, and even pop-tinged tunes.

Tuesday and Wednesday, February 11-12
Emily King, Eddie’s Attic. Although she has only released two albums since her 2007 debut, King had a big comeback in 2019 with the Grammy-nominated Scenery. Call her sound folk-soul if you must, but King’s approach combines those two genres to create cool, emotionally-laced indie pop that comes from the heart. This two-night stand in the intimate Attic will likely sell out, so get tickets early.

Thursday, February 13
Dirty Dozen Brass Band, Vista Room. There’s no telling who is actually in New Orleans’ famed Dirty Dozen currently, but it really doesn’t matter. They bring the foot-stomping party — and a little bit of next week’s Mardi Gras — as their funky jazz horns throb and the rhythms flow. It’s always a celebration, so lace up your dancing shoes and pretend you’re in the French Quarter, at least for a few hours.

Saturday, February 15
Michael Kiwanuka, Variety Playhouse. Singer/songwriter Kiwanuka’s 2019 self-titled follow-up to 2016’s landmark Love & Hate release, wasn’t quite as earth-shaking as its predecessor, but was still powerful enough to land on some year-end Top 10 lists. And live, Kiwanuka’s combination of art pop, space folk, and shimmering soul will push even non-fans over the top.

Tuesday, February 18
Jason Boland & the Stragglers, Terminal West. This Texas by way of Oklahoma act has been cranking out pure country, honky-tonk, and Americana, all shot with a blast of rock and roll, for almost two decades. Imagine a combination of George Jones and Waylon Jennings, and you’re close to Boland and his group’s tough, often outlaw style.

Wednesday, February 19
Ana Popovic, Terminal West. She plays hot guitar, writes solid blues rockers and ballads that reflect her diverse influences of funk and pop, sings great, and is easy on the eyes, so what’s not to like about Ana Popovic? OK, so she’s no earthy blues mama. Popovic still puts on a high-wattage show appealing to blues and non-blues fans alike.

Thursday, February 20
Wesley Stace, Eddie’s Attic. Billed as “A tribute to John Wesley Harding featuring Robert Lloyd,” Stace is better known to most under his JW Harding pseudonym. He will be playing his ’80/’90s indie pop material written and performed by that alias as an unplugged duo with multi-instrumentalist Lloyd.

Friday, February 21
Randall Bramblett, Eddie’s Attic. This CD-release performance is not for a new album from local favorite Bramblett but rather a reissue; the 10th anniversary edition of 2010’s somewhat obscure The Meantime. It’s a jazzier, more soulful, laid-back and acoustic set, played by a trio configuration (piano, bass, drums) that displays another side of the singing/songwriting Southern music veteran.

Friday, February 21
Joseph, Terminal West. It has taken about five years, but the Closner trio of sisters — named Joseph after a small town in Oregon — have moved to the next level in the Americana scene. They effortlessly meld folk, pop, and indie rock with soaring harmonies, and their latest third album, Good Luck, Kid, perfectly captures that sound.

Saturday, February 22
Delbert McClinton, Variety Playhouse. Texas roadhouse legend McClinton plays here so often he should probably rent a condo. But with a dedicated fan base and a killer band, the combination of country, blues, and soul powered by his distinctive vocals never disappoints the hardcore fans who show up for every gig. He turns 80 (!) this year, so if you haven’t caught his show yet, this is the time.

Tuesday, February 25
Doyle Bramhall ll, Eddie’s Attic. Clapton band member and ex-Arc Angels frontman Bramhall ll has been releasing tough, indie rock albums with a solid blues feel for nearly 30 years. He’s an experienced guitarist, songwriter, and impressive singer who never quite found his audience, but through no lack of trying. He’ll be playing material from 2018’s under-the-radar gem Shades that injects some psychedelia into his dusky style.

Wednesday, February 26
Brent Cobb, Terminal West, two shows 6:30 and 9:30. Join Georgia-born Cobb, newcomer Maddie Medley, and others as they unplug for a rare seated show of acoustic country, some with a blues base, at this relatively intimate venue.

Friday and Saturday, February 28-29
Joe Bonamassa, Fox Theatre. The screaming blues-rock guitar of Bonamassa and his tight band of veterans gets another two-night workout at the Fox. This annual event is a big, flamboyant production; Joe knows how to rev up his fans with lights, sound, and his ever-present suit and shades. He’s talented and knowledgeable about the genre, but many deep blues lovers find the flash overtakes the music which is never less than professionally played, if somewhat soulless underneath. — CL —