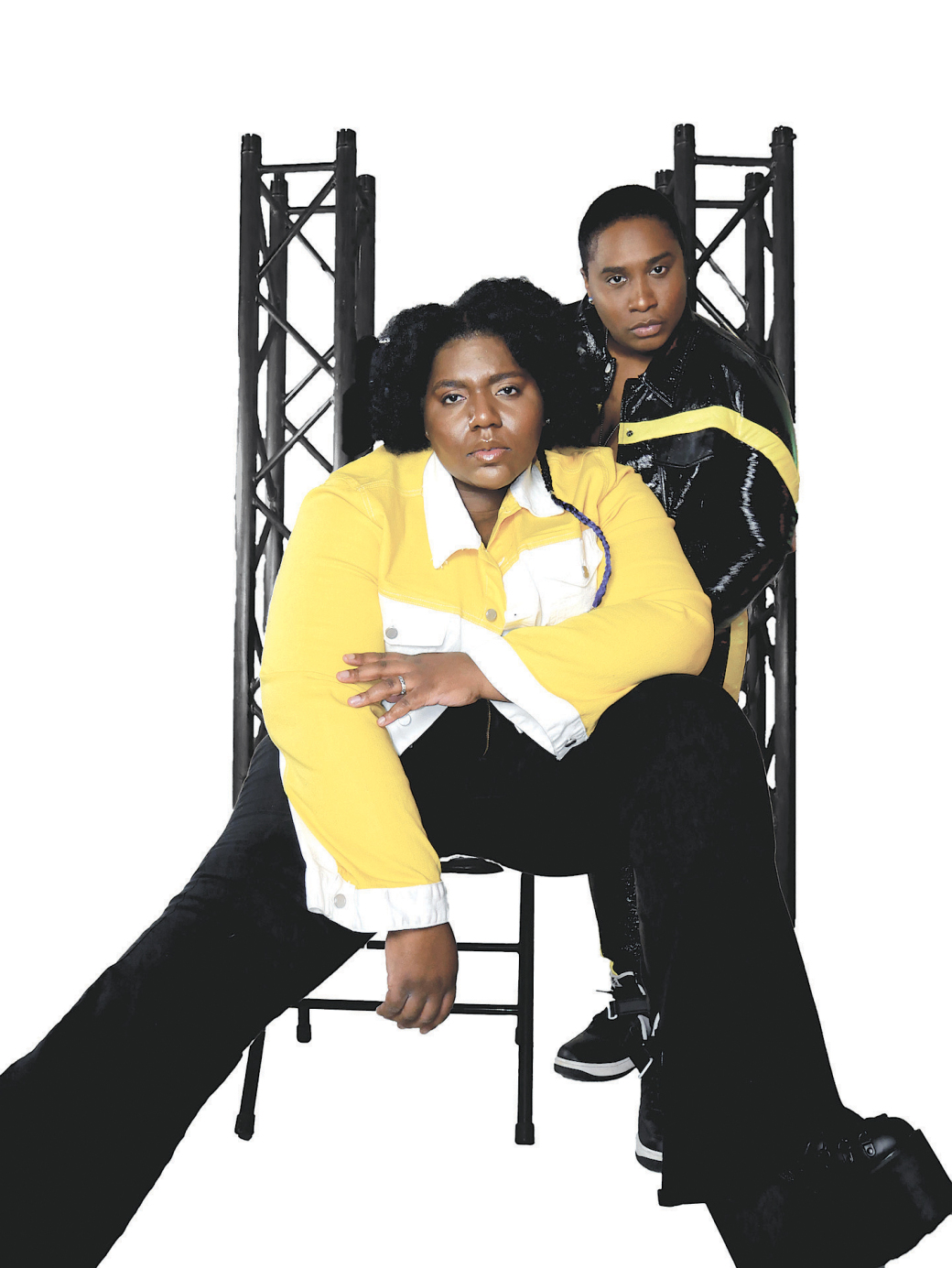 To ask someone which part of Atlanta they are from is to welcome answers of various complexities. At times it can be simple — a concise “Pittsburgh,” for example — yet other times much more complicated. Outside of debates on what is truly considered Atlanta, the sheer number of stories and cultures native to the city’s neighborhoods are enough to transform a two- to three-word answer into a short essay response.

The latter is exactly what happens as Rocket Rhonnie and AUDIADASOUND (pictured left to right) explain their roots across the city. Rhonnie pops off a quick Southside/College Park combo, and Audia claims the Eastside — and more precisely, Ellenwood — by reciting the hook to Crime Mob’s “Ellenwood Area”: “Ellenwood Area / fuck wit us, we bury ya!” The conversation quickly expands from neighborhood talk to their latest musical campaign and the painful baggage that links their surroundings to their art.

Together, Rhonnie and Audia are The Queendom, a female hip-hop and R&B duo whose music hits harder than blunt force trauma. Their debut project, Queenshit Era, arrived in 2018 and earned them opportunities to perform at A3C, SXSW (South by Southwest), and other local indie festivals. From its album cover to the music video for its standout cut “Duty,” Queenshit employed powerful elements of ancient Greek imagery, making for minimal but striking visual components that complimented the straightforward nature of the record.

Now, two years later, the Queenshit era is over, and the group is entering a more colorful one as they ready their upcoming album: Vice. Neon imagery dictates the steamy music video for its lead single “Plekeke” (pronounced pleh-ke-keh), and the Kill Bill-inspired outfits that Rhonnie and Audia are both sporting hint at the album’s retro and cinematic art direction.

Their enthusiasm has seeped from the visuals into their recording sessions as well, and, quite frankly, The Queendom is having a lot of fun this time around. The previously mentioned single “Plekeke,” for instance, was derived from meme obsession during a smoke session. On a night when the artists were exceptionally high, Rhonnie started freestyling over one of Audia’s beats, referencing Skinbone’s viral remix to Vanessa Carlton’s “A Thousand Miles.”

“It started off as a parody,” Audia says. “Then it got really sexy.”

Thus, the sexually charged earworm was born, and its release signaled a vibrant new direction, both visually and sonically, for the duo. However, they warn that despite its bright appearance, Vice isn’t just shits and giggles. Rhonnie and Audia admit that intensity, no matter the emotion, has been the bedrock of the album, allowing them to build a collection of songs that reflect all aspects of their experience — from joy to anguish.

For Audia, who primarily oversees The Queendom’s production, creating new music has been therapeutic. The confidence she expressed earlier when repping the Eastside falters as she reveals that her mother passed away shortly after her family relocated there, which unfortunately served as the catalyst for her interest in making beats. Nearly 13 years later, Audia continues to find solace in exorcizing her demons on wax.

“After she passed, producing was literally what kept me going,” Audia says. “I’m a very passionate person, so whether I’m sad, excited, or mad, you’ll hear that on this next project.”

Rhonnie, on the other hand, typically strays from detail-specific introspection in her rhymes. Her extensive experience as an audio engineer and a songwriter has made the process more of a technical than a healing experience, but working with Audia on Vice has encouraged her to open up more. Rhonnie divulges that topics she never thought to take a crack at — such as depression, family struggles, and growing up in College Park — will finally be heard on the upcoming record.

“I was so disconnected from what happened in my childhood that it’s kind of hard for me to touch on these emotions,” Rhonnie says. “Making this album essentially forced me to go to therapy.”

Vice is set to be The Queendom’s most vivid and emotionally intense effort to date. Although no release date has been decided for the record, the duo teases that its next single, “I’mma Go Get It,” will be arriving soon. Additional sonic and visual surprises await listeners in the coming months, and Rhonnie and Audia promise that their new direction will still slap with the hard-hitting energy that they have become known for.

Just like they rapped on “Duty” from their 2018 debut, they have an obligation to “shit on these hos,” even when infusing topics like mental health, bad habits, and childhood trauma into their music. Heavy are the heads that wear the crowns, but such are the duties of queens.