Old times there must be forgotten 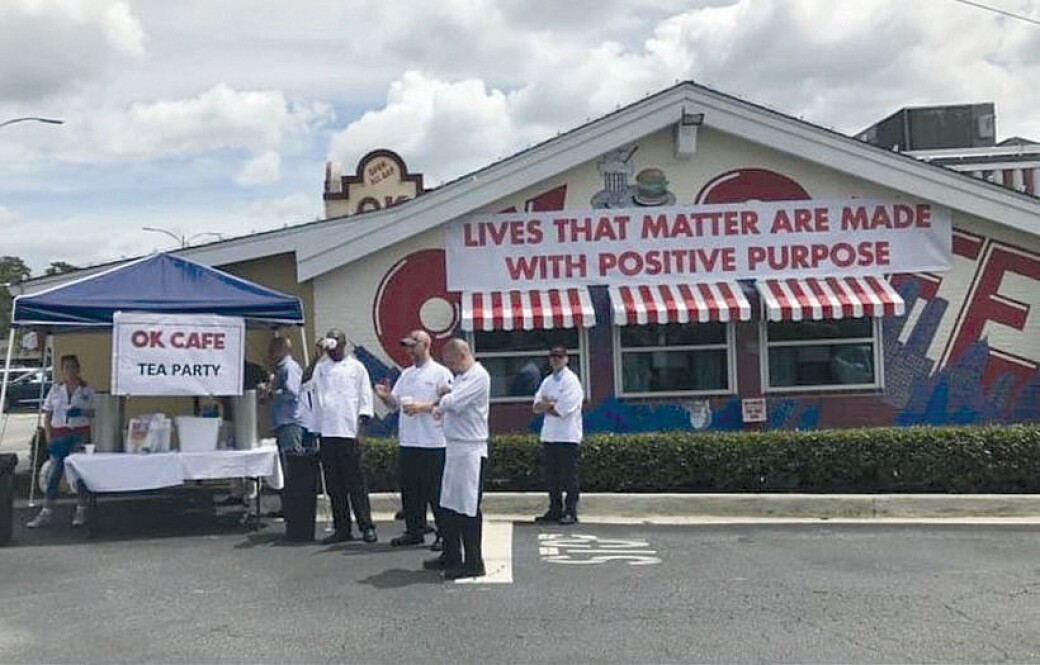 Photo credit: Reader Submitted
YOU ARE WHAT YOU EAT: Be careful what you put in your mouth ­­— and from where it comes.
By CLIFF BOSTOCK Tuesday June 30, 2020 11:45 AM EDT

I tried to go to a reopened restaurant last month. They made everyone wait in line six feet apart outside the door. They pointed temperature guns at everyone’s forehead. We had to sign a waiver promising not to sue them before we died in the ICU. Everyone passed. They administered IQ tests. Everyone failed. We were all sent home.

Kidding, but that’s honestly what I feel about dining inside a restaurant at this point in the pandemic. Granted, my decrepitude puts me at high risk, but I’m not clear how anyone would have a good time inside a restaurant during a time when COVID-19 continues to rise (at this writing) and experts predict a devastating second wave. An alarming number of reopened venues don’t follow guidelines, which are calculated to reduce risk but — let’s face it — tubs of hand sanitizer, facial masks, and tables in screaming-distance-only do not add up to a relaxing dinner. Fortunately, lots of normally full-service restaurants are offering take-out, including family-sized gourmet meals at great prices. Many are reopening safer patio dining only. But you go ahead and eat inside. Take a Xanax before you leave the house and have a cocktail when you get there.

In mid-June, the pandemic collided with what turned into an equally global protest against police brutality, specifically in the horrific murder of George Floyd in Minneapolis. In one protest, organized by Buckhead4BlackLives, an estimated 3,000 Atlantans marched up West Paces Ferry to the governor’s mansion. The march began in the parking lot where OK Café is located. In probably the most tone-deaf deed since Paula Deen explained that, yes indeed, she had used the N-word, Susan DeRose, co-owner of the restaurant, draped a banner outside with this message: “Lives that matter are made with positive purpose.” It was obvious mockery of “Black lives matter” and reeked of the thinking that also led her years ago to hang a huge carving of the old Georgia flag, which was basically a frame for the Confederate flag. The restaurant drew lots of negative attention for that, so DeRose moved it to a less conspicuous spot while installing a replica of the “Betsy Ross flag” in the original space.

Some people defended the banner, saying it was not inherently racist. Which is true if you completely disregard the context, but that’s rationally impossible. In interviews, including a lengthy one with the Atlanta Business Chronicle’s Chris Fuhrmeister, DeRose argued that she was protesting the violence that affected small business owners. I think it’s quite clear that Black Lives Matter is not an advocate of violent resistance even though some looters took advantage of the situation. DeRose’s banner reads like a recoded update of Ronald Reagan’s ranting about “welfare queens” in Cadillacs. Were there any doubt about what’s at play here, consider this excerpt from the Business Chronicle’s interview with DeRose:

“We are not apologizing for being good. We don’t need to make any apologies. We didn’t do anything wrong. We have no white guilt. We have white pride. We just have pride in our country.”

At this writing, the drama of white lunacy is still underway. In another jaw-dropping move, DeRose announced she was going to put the offending flag up for auction and donate the proceeds to the Atlanta Police Department. Let me explain this. Black people are not the instigators of violence in this protest against murder. The police, the murderers, are the instigators. They are responsible for inciting the violence that followed. The police declined DeRose’s offer because even they are wise enough to deduce that accepting cash for the sale of an offensive flag honoring enslavement of black people — the people they have brutalized — would be really dumb.

Some people have advocated a boycott of OK Café and DeRose’s two other Buckhead restaurants, Blue Ridge Grill and Bones. All three of these are Atlanta icons. It’s been years since I’ve been in any of them, but they all have good reputations despite the ire that some of DeRose’s former employees expressed on Facebook about their experience working in them. Some long-time big-monied customers also expressed shock as the story emerged. This is Buckhead, after all.

Among the many sad things about this story is its revelation of how entrenched racism remains among white authorities. I remember when I was a kid opening the Atlanta Constitution on weekends to read “Pickrick Says,” an advertisement for fried chicken that also advocated segregation. It was so over-the-top, I enjoyed reading it for its surrealness. The author was Lester Maddox, owner of the Pickrick Restaurant, who ran repeatedly for public office and was finally elected governor in 1967. He was most infamous for literally brandishing axe handles at black people who attempted to integrate the Pickrick after the Civil Rights Act of 1964. These axe handles, called “Pickrick drumsticks,” became popular souvenirs, even after Ole Lester closed his restaurant rather than comply with the Civil Rights Act. Understand: The axe handles were not merely symbols of violence against black people. They were literal tools of violence and, as such, resembled the batons with which protesters were beaten during the civil rights movement — and just last month, all across America.

In the South, we have long hidden much of our racism under our code of manners, creating a kinder, sweeter, genteel racism. I’ve told this story before, but nowhere was this more obvious than at Aunt Fanny’s Cabin, a restaurant to which my father dragged our family nearly every weekend when I was a teenager. Opened in 1941, it was located in Smyrna and its history was mythic. Aunt Fanny was a slave who was freed by her grateful owner. She became famous for her delicious Old South cooking that brought fried-chicken-lovin’ white and black folks to her door. She lived until she was 100.

The problem with this story is that it was a fiction concocted by the white owners who wanted to create a stage for the re-enactment of the good ole slavery days. Once you were seated there, a young black kid would come to the table with a large wooden menu with a hole at the top through which he poked his head. He’d sing-song the menu. Soon, one of the black servers — in a plaid dress and an Aunt Jemima-style do-rag — brought your feast to the table. The food really was good and us white folks sure did appreciate it. When the servers gathered ’round the piano to sing gospel music and “Dixie,” shaking Mason jars to collect money for their church, we loaded those things with nickels, dimes, and, yes, even quarters!

I couldn’t count the times my family went to this place, but I do recall the beginning of the end. My grandmother from Philadelphia came to visit and within 15 minutes she was horrified by the noise, the scene, and the food. God, I loved her. The servers at Aunt Fanny’s eventually refused to sing “Dixie,” and the restaurant finally closed in 1992. The city of Smyrna bought it and moved the faux slave cabin to use as a welcome center to host parties. That, perhaps, is the most brain-dead part of the story: A city appropriates a monument to racism to say howdy.

The history of racism runs deep in the metro area. There were plenty of other restaurants in this city that romanticized the Confederacy and plantation life, like Johnny Reb’s and Mammy’s Shanty, and it still remains true that most people have no idea how much our Southern cooking owes to Africa. But how in the world does a white woman hang a Confederate flag, chastise a civil rights group, and then make this claim: “The OK Cafe opened its doors July 8, 1987, and so great was the longing for a true southern restaurant that by the end of the first week it had become an Atlanta phenomenon with crowds standing in line to get in”? Hey, lady! Southern food is black! -CL-