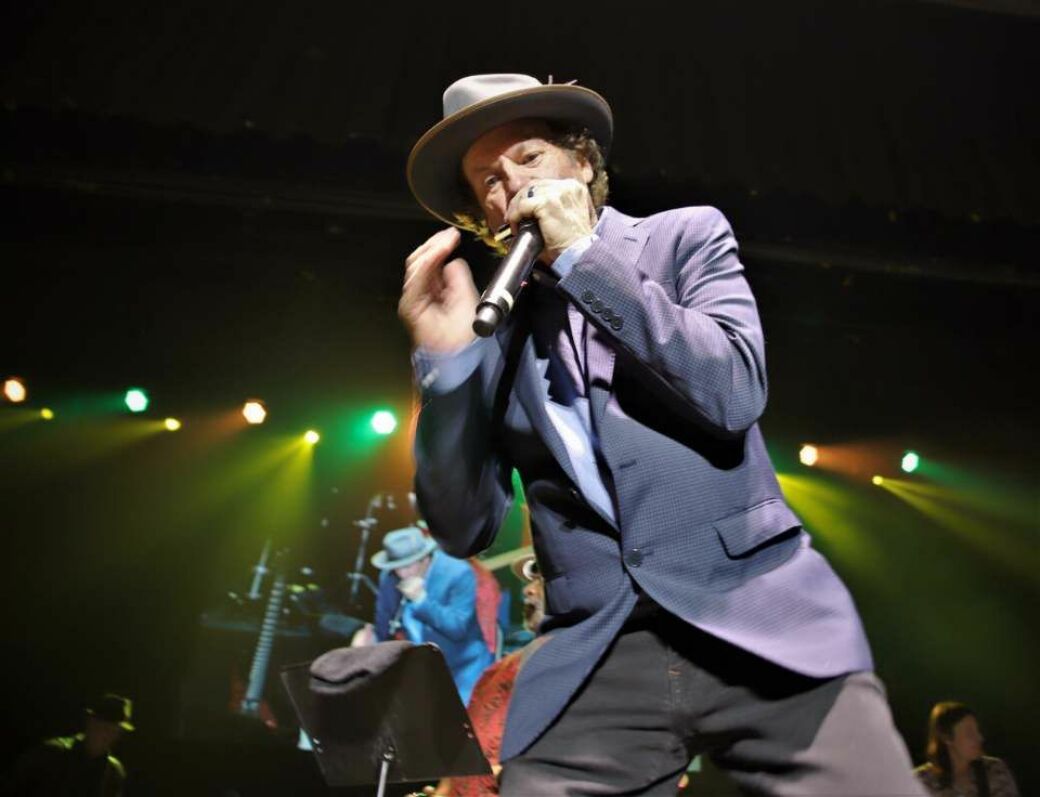 It seems that any musical act or event that achieved even minimal popularity in the late ’60s/early ’70s has been celebrating their 50th anniversary in some form over the past few years. That’s not likely to change as we proceed through the 2020 decade. But it’s unlikely that Wet Willie, or their frontman founder, Jimmy Hall, will get a similar celebration. He’s too busy working to spend time on such trivialities. Or at least he was, until the live music industry came to a screeching halt in March.

Wet Willie formed in Alabama around 1970, but quickly moved to Macon to ride on what would be, for a short while, the Capricorn label gravy train. The group released its 1971 debut as the first act signed to the imprint after The Allman Brothers Band. That album, simply titled Wet Willie (recently reissued combined with Wet Willie ll, on BGO from the UK) with the eye-catching cartoon cover art, set the tone for the funky, soulful rocking of the Jimmy Hall-fronted band. Their initial run lasted for seven studio albums, one hit single (1974’s reggaish, upbeat, and evergreen “Keep on Smilin’”), and two live releases, until 1979 with a few personnel, and label, changes.

For the last 40 years, the irrepressible Hall has been busy — hooking up with everyone from Gregg Allman and Hank Williams Jr. to Jeff Beck and Joe Bonamassa (he contributes harmonica on an instrumental version of “Polk Salad Annie” from Bonamassa’s recent Danny Gatton tribute). Hall is the go-to horn-honking/harp-blowing singer for those looking to inject a dose of Southern-refried R&B into their sound. He’s released the sporadic solo albums along the way, but nothing recently, though that may change in the coming year as industry personnel notice his work ethic and influence; enough so to induct him into both the Alabama and Georgia Music Halls of Fame.

Hall is reveling in his elder statesman status (he’s 71, but looks and sounds decades younger) as he guests with the next generation of Southern rockers like Blackberry Smoke and the Allman Betts Band. The latter features three offspring of the original Allman Brothers Band, all of whom Hall has known since they were children. He contributes spooky harmonica for the Allman Betts Band’s Spaghetti Western “Ashes of My Lovers,” from the new album Bless Your Heart. “They wanted this kind of haunting harmonica on it. We put a lot of reverb on my harp, turned it way up, and got this cool sound. It was fun,” Hall explains.

As for Blackberry Smoke, Hall says that in late January 2020, he got a call from Smoke frontman Charlie Starr asking if he was free in February. Hall was in what he calls “cruise mode,” heading out to sea playing on three cruises in a row (Delbert McClinton, Joe Bonamassa, and “Rock Legends”). The Smoke idea was for the band to record an E.P. in Macon’s recently-renovated Capricorn Studio that would both “be a tribute to Capricorn Studio but also help promote the band’s Southern Spirit tour” (which was postponed). Starr told him “We want to do ‘Keep on Smilin’,’ (and) ‘Grits Ain’t Groceries’ (both Wet Willie staples) live in the studio, and have fun doing it.” The recording only took one day, resulting in inspirational versions of both songs that display Hall’s exuberance as he feeds off Blackberry Smoke’s rugged Southern vibe, and they feed off a progenitor of their sound. “Charlie is a great bandleader and always does his homework to make sure the band is right. They had the Black Bettys, these two beautiful twins singing backup, and they were the icing on the cake. At the end of ‘Keep on Smilin’’ I did a gospel call-and-response thing. I couldn’t be happier with it.” Even more special, Blackberry Smoke unveiled the session’s video on May 22, the same day “Keep on Smilin’” was originally released by Wet Willie in 1974.

I asked Hall if he realized the first two Wet Willie albums were being reissued in the UK. The short answer was “no,” but Hall explains it to be part of the convoluted music business, something he is more than familiar with, having worked in it for five decades. “Since there is no Capricorn label anymore, some of the material is Universal Music Group, and some of the publishing is on Warner Chappell. None of those people take the time to stay in contact with us when something like this happens.”

Still, he’s glad they are again seeing the light of day. Mentioning them brings back fond memories of that early, more innocent era. “We had the same producer for both; Eddy Offord. He was an English guy who produced Emerson, Lake & Palmer, Yes, and others.” Not exactly the first name you’d think of to work with the very rootsy Wet Willie.  “Frank Fenter (Capricorn co-founder with Phil Walden) called us the American Rolling Stones. Through their connections with Atlantic, they got to Offord and worked out a deal. Working with Eddy was an education for both of us. We had our funky, bluesy R&B-based soul, and he comes from progressive rock … very structured, jazzy songs. But he loved what we were doing. We had him play some percussion on things to see if he could get funky,” Hall laughs. He remembers those Capricorn years as a “steady progression of learning. I learned more and more about songwriting — and my confidence grew along the way.”

By the time of the hit fourth album (Keep on Smilin’) with legendary producer Tom Dowd, the Wet Willie formula was perfected. It made that and the follow-up Dixie Rock the two most cohesive, durable, and representative albums in the band’s catalog. They also put Hall and his band on the map, ultimately allowing him to have a fruitful, eclectic, and relatively profitable solo career that shows no signs of slowing down.

Let us be the first to wish Jimmy Hall and his band a happy 50th anniversary. Hall has kept us smiling, and will hopefully continue to do so, for many years.