THE BLOTTER: Don’t bank on it 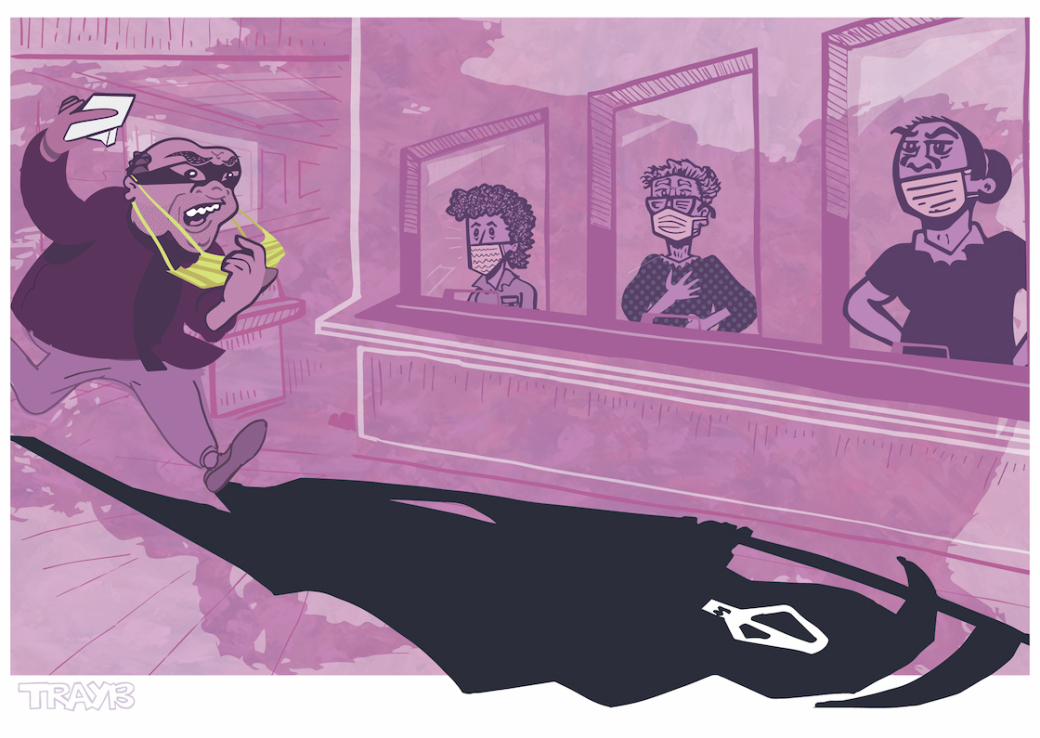 A 51-year-old man allegedly tried to weaponize COVID-19 to rob a bank. The man entered a Chase bank in Clayton County, off I-85. He gave the bank teller a note demanding cash. He didn’t have a gun.

The Clayton County Sheriff’s Office reports: “The suspect did not display a weapon, but stated he had tested positive for COVID-19, and if the bank did not comply with his wishes, he would begin to infect everyone in the branch.”

His COVID ploy failed. A bank employee called police — and the man left without getting any money. Riverdale police responded to the bank, and identified the man from surveillance video. Five days later, Clayton County deputies tracked down the 51-year-old man at his Social Circle home — and arrested him.

According to cbs46.com, the man said he’d fallen on hard times and needed about $2,000 to catch up on bills. Now, he’s behind bars on attempted bank robbery charges.

ATL DRIVER MELTDOWN: Near Roswell, a Friend of the Blotter named Ed Burdell was heading eastbound on Highway 92 when he encountered a car behaving strangely in the left lane. The car had Florida tags.

“The driver was actually going the speed limit, which is 45 mph on that section of road. Can you believe it??!!” says the outraged Burdell. He described the Florida car as an “off-white, tired-looking Toyota, which mirrored its occupant.”

Things quickly deteriorated when Burdell and his unknown adversary approached the traffic light at Hwy. 92 and Alpharetta Highway. When the light suddenly changed from green to yellow, rather than accelerate through the intersection — as is de rigueur in Atlanta metro driving — the Florida driver came to a complete stop just as the light turned red.

“I was tailgating as much as two car lengths behind him, and I coulda made that light,” wails Burdell.

“After 30 seconds of eternity,” Burdell recalls, “the light turned green again, and we two drivers proceeded through the intersection — but not before I passed the Florida driver in a fit of well-earned pique!”

“When I think of all the opportunities in life that I missed — passing other slow cars on the right, just barely making lights, perhaps even getting to my destination a minute or two earlier — the full magnitude of this really hits home,” Burdell says.

Burdell reports that he will be admitted into an Atlanta driver treatment and counseling program in an effort to deal with this tragic occurrence. We wish him the best.

Apparently, Shaq’s no rookie player when it comes to Georgia policing. Back in 2016, the 7-foot-1 O’Neal became the tallest sheriff’s deputy ever hired in the history of the Clayton County Sheriff’s Office. “Welcome to the crime-fighting family, Shaq!!” posted Clayton County Sheriff Victor Hill in 2016.

Shaq has said he may run for sheriff in Henry County in 2024. Before that happens, we’d love to see Shaq hitting the streets like any other new officer — and directing traffic a few times during rush hour.

AMBITIOUS TEEN SCAMMER: In Gwinnett County, a 19-year-old allegedly managed to steal nearly a million dollars from the Kroger where he worked — all within two weeks, while his co-worker in charge of flagging fraudulent transactions was on vacation.

According to the AJC, the 19-year-old created more than 40 returns for nonexistent items, ranging in price from $75 to more than $87,000. By entering a code allowing him to return lottery tickets that were never actually sold at the Kroger on Steve Reynolds Boulevard, the 19-year-old racked up $980,437 worth of returns.

Those returns were then placed on several credit cards.

“It was just like returning any other item where he basically said, ‘This item is being returned’ and then picked an amount for how much to return it for,” Gwinnett County Police spokesman Flynn told the daily newspaper. “There were no lottery tickets. He just picked lottery tickets as an item to return.”

Investigators say the 19-year-old used the stolen $980,000 to buy two cars, guns, shoes, and clothes — but that the same teen wrecked and totaled one of those cars, a Chevrolet Camaro, shortly before his arrest.

“It sounds like he got away with it, and then as soon as he did, he went a little crazy with it,” Flynn added.

A Marietta attorney says: “It’s kind of impressive that he was able to pull this off within a two-week span and not get caught sooner.”

CAPITOL FALLOUT: A Georgia man linked to the QAnon conspiracy group is among the dozens facing charges from the deadly riot at U.S. Capitol on January 6.

The AJC reports: “In 2018, Meredith attracted attention in metro Atlanta for erecting a billboard on Cobb Parkway in Acworth espousing QAnon, a baseless and debunked conspiracy theory that holds Democrats and Hollywood elites are part of a secret cabal that snatches children to sexually exploit and kill for a supposed youth-regenerating chemical ….

“According to a report filed by federal agents, Meredith allegedly sent a text message threatening to put ‘a bullet in (Pelosi’s) noggin on live TV’ and another message that he was headed to Washington for the rally with armor-piercing bullets. The report notes that car trouble prevented Meredith from arriving in time for the pro-Trump rally, but he continued to Washington anyway.”

FBI agents found Meredith in a Washington, D.C., hotel room, allegedly with hundreds of rounds of ammunition, an assault rifle, and threatening messages to Pelosi. Meredith had reportedly texted an acquaintance that he was “high.” FBI agents reported seizing “a box of suspected THC edibles and a vial of Testosterone Cypio-nate/Propionate.”

In June, Meredith appeared with an assault rifle at a Black Lives Matter protest in Hiawassee. Meredith told the North Georgia News this: “I sincerely believe the New World Order, Cabal, Deep State — whatever you want to call it — wants society to devolve into a race war so that it’s much easier to take over.”

LOOKING FOR LOVE IN ALL THE WRONG PLACES: Fel-las, do ya need another reason why dating apps suck? Here’s one: A Georgia woman found a guy on a dating app — and agreed to meet him at his home on Hartford Drive in Clayton County. During their first date, the woman noticed a large amount of cash in the guy’s house. Police told 11alive.com that the woman allegedly called two of her male friends and arranged for them to rob her new love interest.

As soon the woman left, her friends showed up to swipe the man’s cash. Apparently, there was a struggle and a shooting. The man and one suspect were injured. The man wound up hospitalized after his dating app experiment went seriously off the rails.

This isn’t the first time a dating app was used to entrap and rob lovelorn Georgia men. A 23-year-old Jonesboro woman was busted last year for bringing two guys she met online (using the Plenty of Fish and Tagged apps) to her apartment on Upper Riverdale Road and then allowing her male friends to rob her potential dates at gunpoint.  One guy’s car was stolen in the caper. —CL—