GRAZING: When Mexican is Lebanese and Korean is Southern

The borderless menus of Botica and Mukja 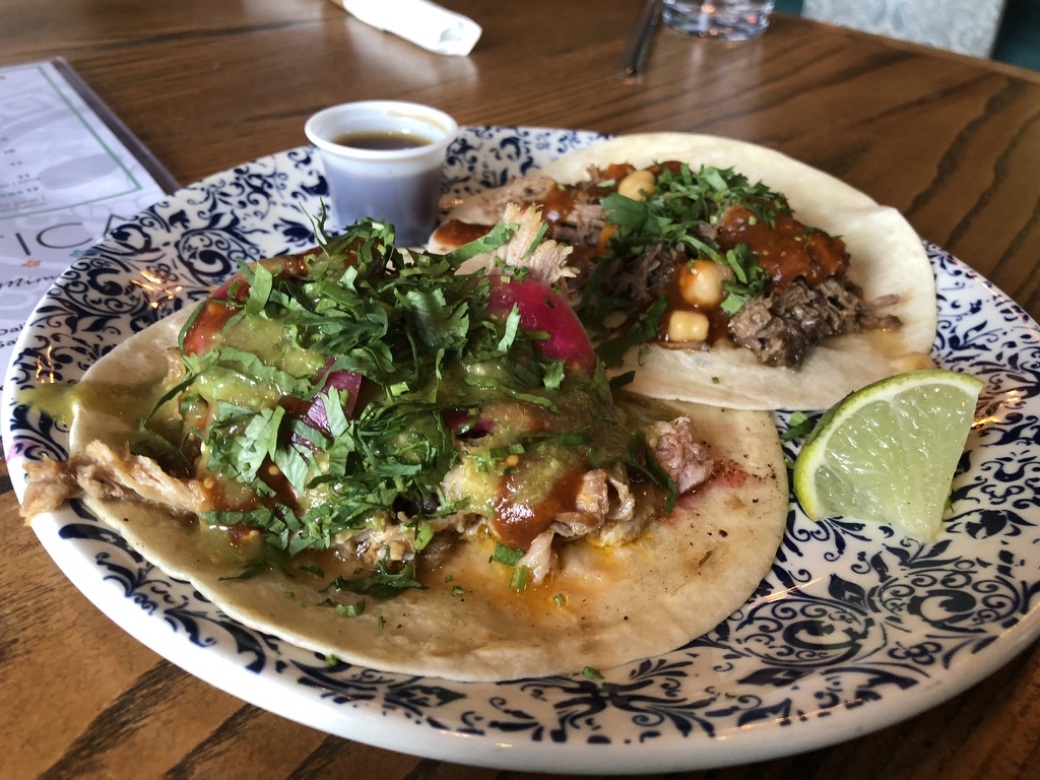 I did it! I was vaccinated into super-human immunity and now I can stare into the naked faces of super-spreaders and say, “You’re not going to kill me! In fact, you’re not going to kill anyone but yourself, your friends, and your family!” It’s a really good feeling to say that. And I’m indebted to Kroger and Moderna for making it possible.

That said, supposedly being over 90 percent immune to COVID-19 has not inclined me to eat inside restaurants. However, last month I went to two restaurants, expecting to do takeout or maybe patio dining, but found their interior dining rooms empty. So, I made the leap into the swarming sea of variants.

First up is Botica, which opened in January in the space formerly occupied by Watershed. I balked when I walked by the restaurant’s patio. Its 100 seats were packed with noisy, unmasked, boozy diners. The bar area inside seemed nearly as crowded. A server pointed to the large, empty dining room adjacent to the bar and I followed her there. I did ask why masks apparently weren’t required by the restaurant, and she answered with a long silence, then offered to teach me how to take a picture with my phone and store it on an app. I told her I already knew how to do that. She said that was great. I agreed.

Botica is the creation of well-known Atlanta chef/restaurateur Mimmo Alboumeh, who formerly owned the three locations of Red Pepper Taqueria. While it’s too bad he’s not running the show there any longer, Botica’s cuisine is a big step forward. Alboumeh’s main theme remains Mexican, but he’s gently hybridizing it with his personal heritage, which includes a childhood in Lebanon and Spain, plus adult residency in Italy before moving here.

While Botica’s menu includes a few surprises, the main attraction is the “D.F. Streets Inspired Tacos” which are super trendy in Atlanta these days. “D.F.” stands for “Distrito Federal” which refers to Mexico City. In other words, they aren’t Tex-Mex or Southwestern or Taco Bell colon-cleansing snacks. I was at Botica for a quick meal, so I didn’t get a broad sampling of the menu and stuck to a couple of taco classics — the pork pibil and the lamb birria. If you read foodie peregrinations (like this one), you already know birria is an “it food.” It’s a stew typically made with goat (in my experience) but lamb is also common (and it’s my favorite meat). I’m tempted to say Botica’s is the best version on a taco I’ve encountered in the city. The lamb is shredded and juicy, complemented by a fruity, mild guajillo salsa. Garbanzos add a slightly nutty touch. The taco is accompanied by a shot of rather light consommé. Typically, people dip the taco in it. I suggest you pour half of it over the meat and add a squeeze of lime. Birria is a stew, and while I love tacos made with it, they do not capture the entire range of flavors.

My other taco was pork pibil, which you may remember was Johnny Depp’s obsession in Once Upon a Time in Mexico. The usual name is “cochinita pibil” which signifies that it’s made with a suckling pig, so I’m assuming Botica’s is made with a grown-up. I also doubt that it’s cooked in the ground, wrapped in banana leaves, like it is in Yucatan. But it’s fine as hell. I wanted to try it because it’s served here under a green salsa that’s tart and citric, zapped with pickled onions.

Altogether, there are 10 tacos on the menu. The only one I saw that had a decidedly fusion quality was one made with falafel. Default tortillas at Botica are flour, but corn are sometimes available. At $4 each they are a bargain, and any normal human will find two more than adequate with a shared appetizer.

Speaking of appetizers, I was expecting to see tapas on the menu here, given Alboumeh’s background. Instead, there are appetizers that feed two or more. In Spain, these would be called media raciones, and they are much more appropriate since a true tapa is only a bite or two composed for one person. Noticing this, I also began to wonder exactly where the Spanish influence was at Botica. I asked my server, and she pointed at the “Spanish octopus” appetizer on my menu. “That’s it?” I asked. She nodded. The next day, looking at the restaurant’s Facebook page, I saw that Alboumeh is preparing paella on a patio grill every Wednesday. Take a look. You’ll be there ASAP.

Of the 12 appetizers, I chose a pair of chicken tamales. After a brief wait in which I managed to avoid looking at all but one of the restaurant’s countless TV screens, someone brought a basket of chips and salsa to my table. I told her I had not ordered that. She looked confused. “What did you order?” she asked. “The tamales,” I said. “Just for yourself?” she replied. Huh? She left, and a few minutes later my server arrived, also with the chips in hand. Eventually, the tamales — redolent of corn, coated in crema, served over a pool of spicy salsa morita — arrived, each one roughly the size of an infant. As the server hinted, there was no way I was going to eat the whole serving, so I asked for a carry-out box.

But wait! I hadn’t noticed the desserts. I owed it to CL readers to try the bread pudding made with croissants and pineapple, topped with salted-caramel gelato, all on a bed of powdered sugar drizzled with more caramel. Were it not for a pandemic that has taught so many of us how to cultivate obesity at home, this would be enough for two or more persons. I readily devoured it, and scraped the leftover half — yes, half! — a tamale into the take-out box. 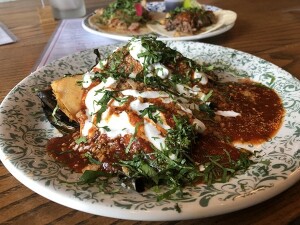 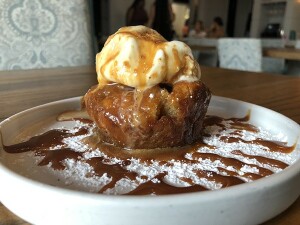 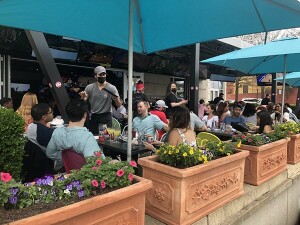 Besides appetizers, tacos, and desserts, the menu includes salads and larger plates like wild salmon, burgers, burritos, enchiladas, and fajitas. They seem clearly targeted for less adventurous palates. There’s also a decidedly more vanilla brunch menu available on weekends. And speaking of vanilla, I noticed that the tables here are not crowded with hot sauces for you to ruin Alboumeh’s deft handling of a cuisine whose flavors are far more complex than Texas Pete would have you believe. (Then again, Alboumeh does market his own “Chico” sauce.)

Botica’s décor is discernably Mexican but not showy or kitschy unless you count those innumerable TV screens. There’s no reason for me to be snarky about that, since I stared at my phone screen and texted hungry unvaccinated friends anyway. I wish it were possible to dine on Botica’s patio (or inside for that matter) with the guarantee of social distancing, but it apparently is not. I’m sure some diners’ worries in that respect are diminished by the restaurant’s prolific menu of margaritas, tequilas, wines, and signature cocktails. Being out of Xanax and not being a drinker, I would have resisted going inside had I not joined the class of the fully vaccinated.

My second dining-in meal was at Mukja in Midtown. This restaurant, opened by two longtime, 20-something pals, Peter Chung and Sean Chang, specializes in Korean fried chicken. Just like the birria at Botica, Korean fried chicken is an “it food” or maybe, better said, it’s a subcategory of the it food known as spicy fried chicken. It’s no longer hidden on Buford Highway. It’s everywhere.

Chung and Chang call their version Southern-Korean, which also describes their ethnic backgrounds. Any suspicion that might be a contrivance was dispelled by Chang during my meal. He was working the floor the day I went in for a late lunch, and we got to talking about fried chicken. I told him I was proud to say I was an advocate of Popeyes chicken long before its sandwich made the list of it foods too. Chang lit up and said he was likewise obsessed and gave me a great tip. “I always tell my friends,” he said (I’m paraphrasing), “that the best way to get a really good sandwich is to call ahead and make sure they do not have any available at the moment. That way, you might have to wait 20 minutes at the restaurant to get one, but it will be perfect.” Laugh at this, but it is so true that the piled-up, cooked-ahead sandwiches suck.

I did not order the sandwich at Mukja, just wanting to get a taste of the fried chicken. I got a quarter of a bird (white meat) with a waffle and some mac and cheese. The chicken was fabulous — unbelievably juicy due to its marinating and brining. It’s dredged and fried and fried again, as is typical. It’s as if the chicken is inside a thick, deliciously edible egg shell that shatters and seeps spicy flavor that you amp up by dipping in one of the house-made sauces. It’s served with traditional pickled radishes that cool off and clear the palate before your next bite of the chicken.

The waffles are clever. Flavor-wise, they are like classic Korean pancakes, but reformed as waffles since that’s what Southerners eat with their chicken. They are seasoned with garlic, serranos, scallions, and honey butter. I wasn’t too crazy about them. They bordered on soggy and the taste was quite muddled. Chang told me that he’s still experimenting with different cooking methods. For now, I’d go with other sides like the mac and cheese which is topped with roasted kimchi and bacon. There’s also red-cabbage slaw with a vinaigrette spiked with gochugaru, the ubiquitous Korean pepper spice. I definitely want to try the “Korean loaded fries,” which are apparently too rococo to describe on the menu. “Ask us for details,” the menu says. The main dishes are all different quantities of fried chicken, including wings. There’s one salad that includes a grilled chicken thigh. 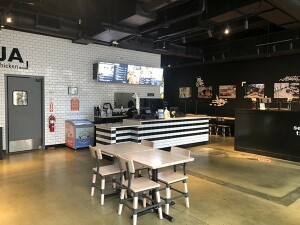 INSIDE MUKJA IN MIDTOWN: BIG AND AIRY ENOUGH FOR INSIDE DINING — BUT TAKEOUT SEEMS TO RULE. PHOTO CREDIT: CLIFF BOSTOCK. 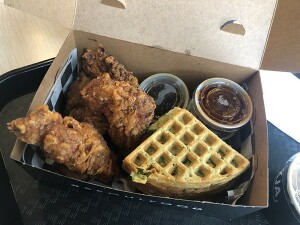 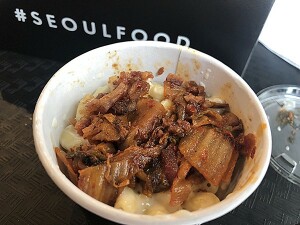 MAC AND CHEESE: DID YOUR MAMA TOP HERS WITH ROASTED KIMCHI AND SMOKED BACON? PHOTO CREDIT: CLIFF BOSTOCK.

When I visited the restaurant, there was a steady stream of people in a take-out lane wearing masks and maintaining distance, but nobody dining in. So I took a seat. The space is loft-like — large, airy, and decorated with some art that plays up the owners’ personal connection to the Southern motif. There is an inspiring story behind the restaurant that has been widely covered in the media. Chang and Chung went through great personal challenges, plus the pandemic complications, to open Mukja, which means “Let’s eat!” I think the passion that drove them to face such adversity is clear in their restaurant. —CL—