THE BLOTTER: Party ends with a bang (the whole shack shimmied!) 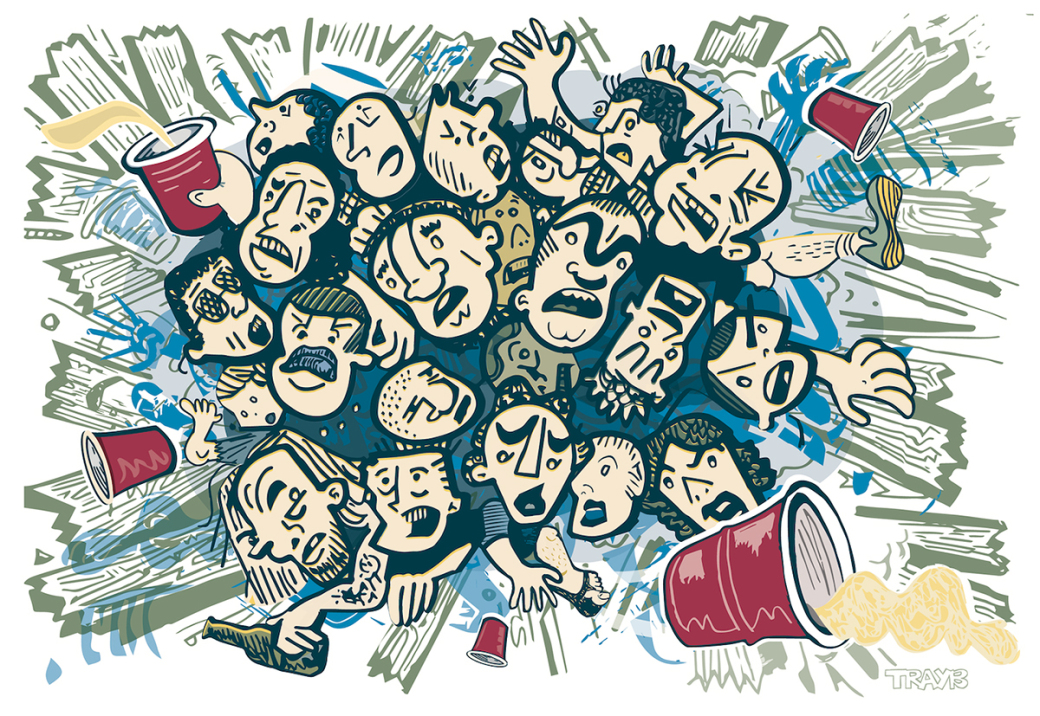 An epic house party collapsed near the University of Georgia campus in Athens, Georgia — when about 500 people crowded into a modest two-story townhome.

Cops estimate more than 500 people were attending the house party, when the flooring of the townhome suddenly collapsed from far too many people standing on it. Twenty-five people sustained minor injuries ranging from scratches and bruises to a possible broken arm. No one was hospitalized, though.

Fire trucks had a rough time getting to the scene due to the “massive amounts of vehicles and people blocking the street,” according to a news release from the Athens Clark County Fire Department. “When our crews finally made it into the home, they found a two-story home over a high crawl space. The majority of the first floor had collapsed into the crawl space due to dozens of people overcrowding the space while having a party.”

The party hostess — described by her friends as a college senior — now has “virtually nothing left” after her townhome on Magnolia Bluff Drive was decimated by her 500-person bash. Code enforcement was called in to determine whether or not her townhome should be condemned.

“We are grateful that this unexpected event didn’t turn out any worse than it did,” Athens-Clarke County Fire Capt. Nate Moss told the Atlanta Journal-Constitution. “These folks should consider themselves fortunate.”

We say, give it two weeks and see about those COVID numbers.

FORNICATION FIGHT: Near Athens, Georgia, a 30-year-old woman was arguing with her boyfriend about their relationship, which she believes is based too much on sex. She left her boyfriend’s home and he followed her to the QuikTrip at the Oconee Connector. The boyfriend admitted that he reached into his girlfriend’s car at QuikTrip and grabbed her keys.

A sheriff’s deputy showed up to resolve their sex-based argument. The boyfriend claimed that his girlfriend had stolen money from him — though we don’t know if he’s talking about a nickel or $500 — no amount listed.

The boyfriend went to jail for swiping his gal’s keys. Two days later, he was released, and returned to his home in Watkinsville, Georgia.

Apparently, post-fight makeup sex was not on the agenda. Someone had entered his bathroom window and stolen his laptop. The boyfriend believes the burglar was his now ex-girlfriend.

CLEAR AND PRESENT DANGER: About 110 motorcyclists and several truckers with the “Sons of Confederate Veterans” rode through Stone Mountain Park on a Saturday in April — even though they’d been denied a permit to gather there. The Georgia chapter of the group had petitioned to host a Confederate Memorial Day event in the park, as they’ve done for nearly two decades. This year, the Stone Mountain Memorial Association denied the group’s permit, and the association’s spokesperson explained why: “With the volatile nature of events in the immediate past and ongoing today, there is a clear and present danger to members of the [[[[[[[[[[[[[[[Sons of Confederate Veterans], potential counter-protesters, park employees, and guests.”

Here’s the truly fucked-up part: “The group had a police escort, though they were not Stone Mountain Police, and it’s unclear which jurisdiction police came from,” reports WSB-TV.

We say, those police officers should be punished. Promptly. It’s called: breaking the law.

Andre initially insisted on Twitter that two plainclothes Atlanta police detectives attempted to stop and search him at the T gates. “They stopped me on the way down to the bridge of the plane for a ‘random’ search and asked (if) they could search me for drugs. I told them no. Be careful.” Andre also tweeted: “At that moment, I was the only POC (person of color) on line. Keisha Bottoms, I know this isn’t the PD you want representing in your airports. #racism #racialprofiling       # jimcrow #racistwarondrugs.”

The Atlanta Police Department says it was not involved in the Erik Andre interaction at Hartsfield, according to the AJC. The APD made a point of noting that they don’t randomly search travelers without evidence/indication of criminal activity.

Also, Hartsfield Airport is located in Clayton County — not the City of Atlanta. Multiple law enforcement agencies simultaneously work there.

Within hours, Erik Andre dropped his Twitter attack on Atlanta police — instead, redirecting his tweet-questions and allegations to the U.S. Drug Enforcement Agency. The DEA also denied being involved in the Andre incident.

A short time later, the AJC reported: “Hours later, the officers involved were revealed to be part of the Clayton County Police Department’s drug task force .… Clayton County police offered a counter-narrative statement to Andre’s claims, saying the comedian was never detained, handcuffed, or searched. “Our preliminary findings have revealed that Mr. Andre was not racially profiled. Our inquiries have revealed that Mr. Andre was cordial, personable, and pleasant to speak with.”

She dropped this gem on Twitter on April 20: “DC is completely dead tonight. People stayed in and were scared to go out because of fear of riots. Police are everywhere and have riot gear. #BLM is the strongest terrorist threat in our country.” Worth noting: She tweeted this at 9:47 p.m., roughly five hours after the guilty verdict was announced.

Except Rep. Greene was flat wrong. As Washington Post columnist Philip Bump notes, “… this wasn’t true. It was, by all accounts, a normal evening that followed an obviously tense day. Had that jury in Minneapolis not found Chauvin guilty, there probably would have been protests, but those protests would by now have been a function of an outcry that spilled past the boundaries of BLM organizing.”

And oh yeah, there still IS increased police presence on Capitol Hill. “But that’s not due to BLM,” Bump says. “It’s because of the threat of right-wing violence like that manifested on Jan. 6 after Greene and others insisted falsely that the 2020 presidential election had been stolen.”

Worth noting: Spotted among the rioting mob on January 6 inside the nation’s capitol: A close buddy and political ally of Rep. Taylor-Greene, a dude named Anthony Aguero. He’s a conservative live-streamer whom Greene once described as “amazing.” They attended a pro-Trump rally together in November, after he lost the election.

IT’S A GAS, GAS, GAS: A 48-year-old woman rakes in $4,000+ a month by farting online. Seriously. The mother of two children has been “flatulence camming” for more than 20 years. Apparently, it pays wayyyyy more than her previous work as a travel agent. She’s been passing gas online since 1999. She even eats foods designed to increase her farting productivity, including Mexican entrees, avocados, and asparagus. “One of my favorites is coleslaw and baked beans mixed together,” she says.

The videos are recorded only when no one else is at her home in South Carolina. Her husband is not into farting at all, she says. Apparently, she has two types of clients: White-collar professionals who want her to say their names in videos as she passes gas. And guys in their 20s who just view her online videos. All for a handsome price, of course.

Is there anything illegal about her endeavor? Nope. Any crime committed or police involved? Again, no and no. We just thought it so bizarre it’s worth sharing in the Blotter.