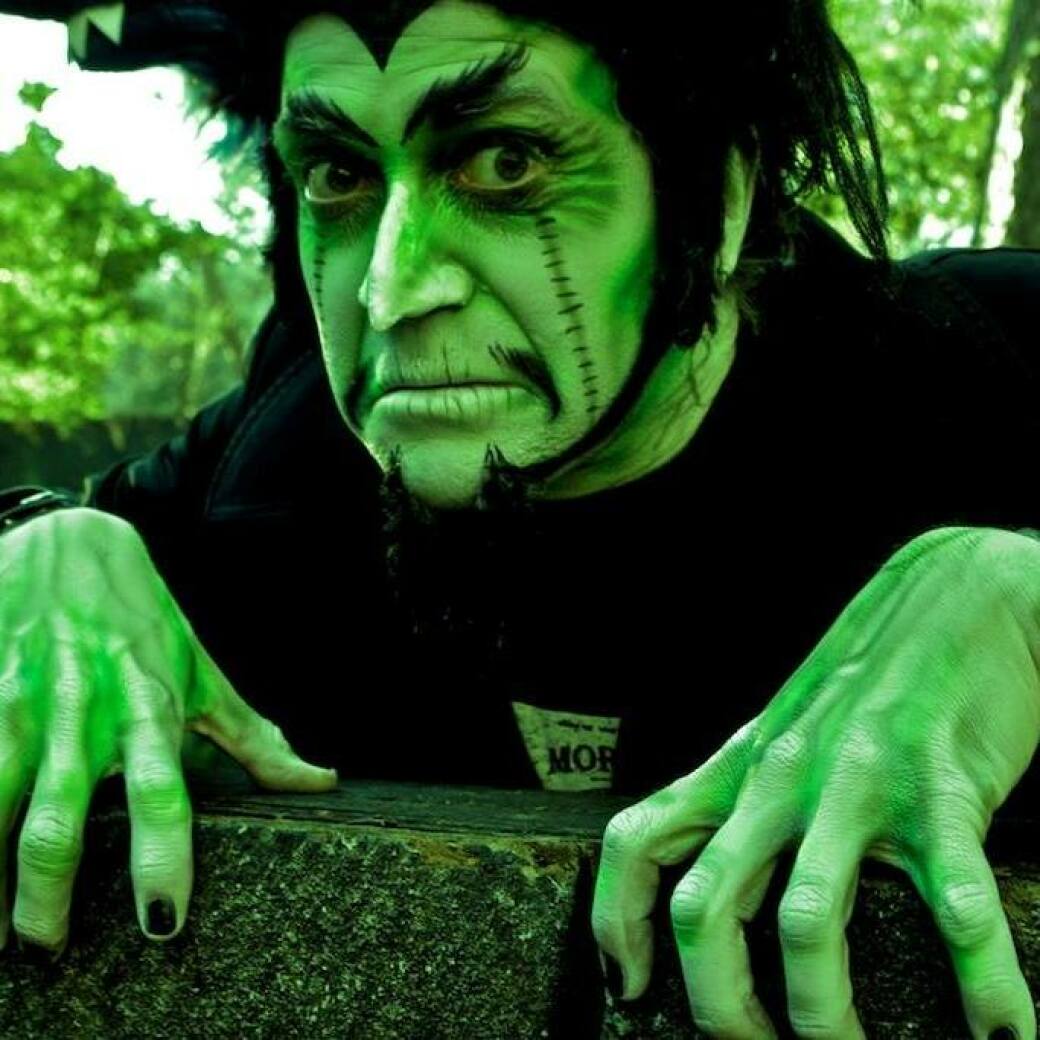 The Silver Scream Spook Show is returning to the Plaza Theatre on Oct. 2 after a long pandemic break. At the helm as ever will be grand master Shane Morton, creator of the long-running horror pageant. The theme of the show will be based around the 1935 classic film Bride of Frankenstein, and the movie itself, the sequel to Frankenstein, will be shown after the live presentation.

A designer, artist, producer, writer, actor, musician, and director, Morton is the man behind the Silver Scream FX Lab, a special effects studio in Atlanta that creates all manner of props, masks, monsters, makeup, designs and other necessities for film, TV, and theater. The laboratory has created haunted attractions, such as Casa de Muerte (House of Death), for Six Flags Over Georgia’s Fright Fest and made floats for the Little Five Points Halloween Parade and the Atlanta Pride Parade. Morton has designed and fabricated interactive art installations all over the United States. His work can be seen in indie hits such as Bad Candy,” Sam & Mattie Make a Zombie Movie, and Mandy, starring Nicolas Cage and debuting the infamous Cheddar Goblin, a Morton creation that went viral. On Adult Swim’s hit show Your Pretty Face Is Going To Hell,” Morton was dubbed art director of Hell and headed the makeup department. Recently, The Suicide Squad used silicone fire safety masks for stunt doubles designed by Morton.

For the upcoming Silver Scream Spook Show, Morton says, “We’ve got some cool illusions and lots of seat-of-your-pants shenanigans that sometimes turn into accidents. People love to see us make mistakes.” Magic tricks and dance routines are indeed rehearsed, but Morton concedes that in the past criticism has been leveled at the show for its looseness and improvisational nature, “but to me that’s the strength of it,” he says. “It keeps things interesting and exciting, and it’s got a vitality I don’t think it would have if it was too rehearsed. It’s got this weird awesomeness to it — the same quality that an Ed Wood movie has.”

A proper wedding will take place during the show with a real minister officiating — Morton himself. “These two kids have been coming to the show since they were really young, and now they’re getting married, giving it [the show] a different angle and a little bit more heart because an actual love story is being played out on stage.”

Morton’s alter-ego, Professor Morte, will once again emcee the proceedings. He based his character on famous horror show figures of the past, such as TV host John Zacherle, actor Ernie Anderson’s fictional character Ghoulardi, and actor Glenn Strange, known for playing Frankenstein’s monster three times during the 1940s.

“I threw a bit of Sid and Marty Krofft in there with a big Witchiepoo nose,” Morton says, “but my favorite part of the Morte character is the stitches that come down his face that are all taken from Glenn Strange.” The Spook Show is in essence for kids, or at least the matinee is. The evening show tends to be a bit more blue, he warns, “but the real thing for me is the kids. It’s got to be funny and kind of spooky, and I keep it pretty light. We’ve had some really magical things happen, like autistic kids who bring us stop-motion LEGOs of Professor Morte.”

Morton first performed a version of the show on Coney Island in New York — where it was known as the Phantom Freak Theatre. It took off in Atlanta after Morton pitched Jonathan and Gayle Rej, who bought the Plaza Theatre in 2006, and they eventually took him up on the idea of doing live shows at the movie house.

Morton’s first job when he moved to Atlanta was creating airbrushed designs for clothing and sold comic books at T-Shirt Dragnet, an off-shoot of Wax ‘N’ Facts co-owned by Dan Beard and Harry DeMille. “That was my introduction to Atlanta — Little Five Points. The local music scene was so good back then, in 1989. I was in a band called Something that we put together with a bunch of SCAD students in Savannah. We moved to Atlanta to become rock stars.” Musicians such as Chris Mills and the band Dead Elvis formed part of the scene at the shop, Morton recalls.

Morton had what he calls a “truly magical childhood” on St. Simons Island after moving there from New York at age five. “St. Simons is a great place for a kid to grow up,” he recalls. “It’s haunted and weird, with oak trees and Spanish moss looming over everything. People think of it as a vacation spot, but I think of the spooky oak trees, creepy marshes and ghost stories.”

The classic movie King Kong (1933) made a big impression on Morton as a youngster, as did Tony Curtis’ role in Houdini (1953). His interest in magic was spurred by Alice Cooper, whose poster adorned Morton’s bedroom wall. “I always wanted to perform as a combination of rock star, magician, and comedian. I figured the Spook Show was the best way to pull it off,” he says. “It’s got a bit of a punk rock quality to it.” 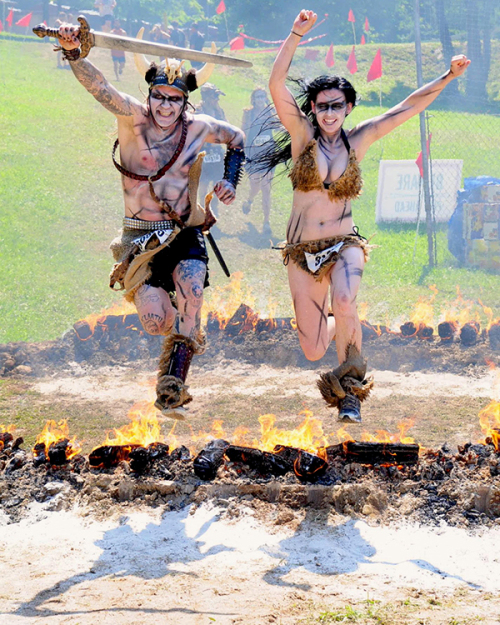 BURNING EMBERS GIVE YOU SO MUCH MORE: When not detailing devious ways to scare and spook others, Morton and Brumby enjoy taking in Viking Warrior games for relaxation. Photo Credit: WARRIOR DASH

Further inspiration came from Canadian conjuror James Randi (aka The Amazing Randi) and his box trunk illusions. “I had super cool parents and always said my childhood was like growing up in the Addams Family house. I had access to cool stuff like the Famous Monsters magazine. I got to see Ray Harryhausen movies. I was really lucky because there were always imaginative things going on in my house.”

Philip Morris, actor, costumer and author of How to Operate a Successful Haunted House, also influenced the young Morton. “He showed you a lot of tricks, like how to make glow-in-the-dark ghosts,” he says. “He was one of the top spook show guys back in the day.” Dr. Evil was the character Morris created and played onstage and as horror host on TV long before comedian Mike Myers appropriated the name for his Austin Powers nemesis. Morris became a cause célèbre when grainy footage emerged supposedly showing the creature known as Bigfoot stomping through snow while looking over his shoulder. “That’s a Philip Morris costume. Over the years we became friends until he passed away. We actually did a Silver Scream Spook Show with Dr. Evil and Professor Morte together on stage — one of the all-time highlights.”

Aiding and abetting Morton in the Spook Show, as well as in many other endeavors, is his longtime girlfriend and partner Madeline Brumby, a scream queen with a bunch of acting credits whom Morton refers to as Mad. A classically trained pianist, vocalist, and dancer, Brumby eschewed biology studies in favor of joining the world of horror entertainment. She and Morton met when both worked on an exploitation action-horror film titled Dear God No! that premiered in 2011 at the Plaza.

Together now for 11 years, Morton calls her “my better half” and “the real brains behind the outfit.” He continues, “She can make stuff happen. I can get people together and get ideas going, but as far as organizing things — without her it wouldn’t be anything.” The pair have since worked together on numerous other projects, such as Dracula: The Rock Opera, Atlanta Zombie Apocalypse, Spring Break Zombie Massacre, Frankenstein Created Bikers and the hit TV series Your Pretty Face Is Going to Hell.

When we spoke, Morton had just wrapped a music video project titled “Inside” in which Brumby gets dissected on camera yet again. During the shoot, a hapless bystander came upon the set just as Brumby, in the middle of a take, “started screaming and blood was flying everywhere, scaring the poor guy half to death,” Morton recalls fondly. The band in the video, Cement Scabies, is a new venture for Morton and features drummer Kellii Scott, from LA rockers Failure, and music teacher Laurie Segars Morrison, owner of the Main Street School of the Arts in Tucker. Morton also has a band called The Valkyrie that started out just for fun, he says, “but I got really sick of hearing about all these kids committing suicide for being bullied, so a lot of the songs are anti-bullying anthems. We might look like this silly transvestite Viking band, but some of the stuff we’re saying is pretty important.”

Currently, Morton is working on the second season of a show for Twitch, a live streaming platform for gamers. It’s called Clicksport-2 and features a galactic emperor played by The Walking Dead actor Dan Fogler, a frequent host of gaming tournaments. “I designed the characters and all the costumes,” says Morton. “They wanted me to do it because they saw my work in Your Pretty Face Is Going to Hell. The producers liked his “wacky style” and gave him total artistic freedom. “I don’t want to offend anybody, but I’d just gay this thing up. It looks like [1982 sci-fi thriller] Liquid Sky meets Ziggy Stardust meets the Power Rangers. These superheroes are all really flamboyant. I would switch gender roles around and make them the toughest characters. They let me go crazy!”

In lieu of this year’s now-cancelled Halloween parade in Little Five Points, Morton and his cohorts are throwing a monster hunt in the area in late October. The idea is to track down “monsters” stationed all over Little Five Points and take a selfie with them. Winners of the Monster Hunt will receive “a mini collectible art book” created by Morton, with his own original artwork, in the style of old iconic horror magazines such as Famous Monsters of Filmland, Creepy and its sister publication Eerie. 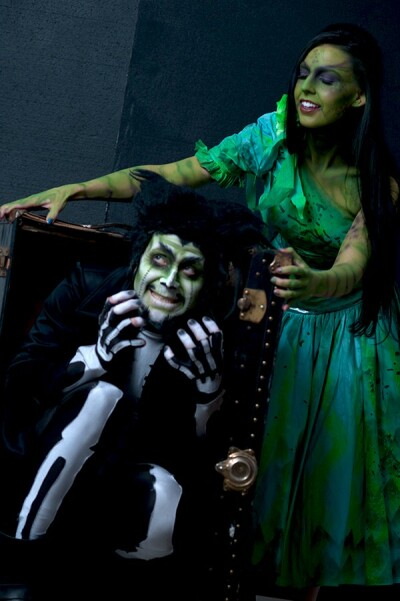 Morton recently returned from a four-month film shoot in Austria and already has plans for another horror movie to be filmed in Transylvania next May. The Romanian government has given the production company permission to shoot inside Bran Castle, said to closely fit Bram Stoker’s description of Dracula’s lair.

Other plans for Brumby and Morton include turning a newly purchased house near Stone Mountain that was built in 1840 into a combination workshop-studio-venue.

“In addition to making props and artwork there, we’re going to use it as an alternative venue for goth Victorian-type weddings, beautifully staged,” Brumby says. “Think of the graveyard scene in Interview with the Vampire — nicely stylized in that vein.”

In the Silver Scream Spook Show, Brumby plays a ghoul named Guna whom she calls “a cousin of the creature from the Black Lagoon.” She says the show “is something I’m probably the most proud of. We produce all of it by ourselves and it’s special to the community. Parents can bring their kids there and they can experience things together in a theater setting. I’m so looking forward to it!” —CL—