ATL UNTRAPPED: East Chain is only getting started 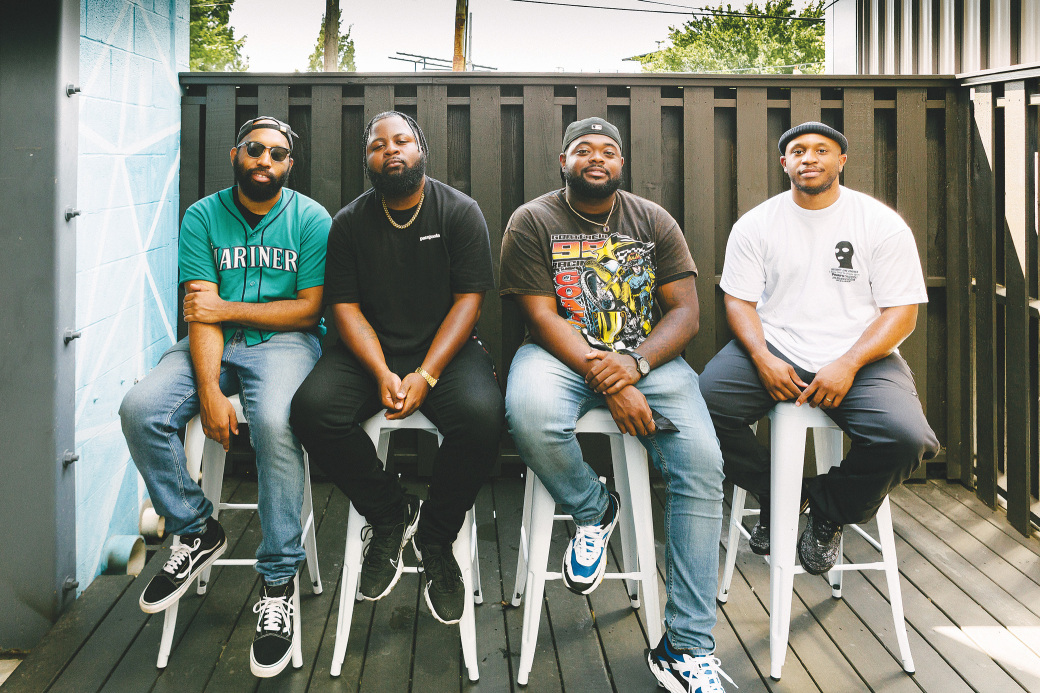 Atlanta has a long-documented legacy of churning out game-changing hip-hop conglomerates — from classic collectives and record labels, like Dungeon Family and So So Def, to modern day torchbearers, like Quality Control and Young Stoner Life Records. A group of friends from the east side of the city hope to inscribe their homegrown record label’s name into that legendary list. Those ambitious individuals go by many names, but together, they are East Chain Recordings.

The independent label’s roster is stacked with talent in the music department, boasting quality producers, including Wili Hendrixs, Mike 24K, Flacko Blanco, and woahheyitskyle, along with performers Michael Aristotle, HQ Jonez, Da Kidd Half, and Kasey Avenues. Turntablist Z92 is the collective’s resident DJ, and on the strategic front, Iri Brown and Eric Montaque help bring East Chain’s vision to life by serving as the general manager and the creative art director, respectively.

East Chain was officially founded in 2013, but CAMP EAST, the recently released compilation album, offers a promising glimpse of what the label is capable of when all of its moving pieces are fully assembled. The 15-track album showcases the East Chain artists’ versatile skill sets, and it also features some of the most dynamic voices in the local rap scene, including Shamba, Yani Mo, BOREGARD., Money Makin’ Nique, Jaye Newton, Salyse, and Andy Z6.

In August’s ATL Untrapped, I highlighted CAMP EAST in my roundup of Atlanta’s best low-key projects of 2021 so far, attributing the record’s inclusion on my list to its “quotable bars, contagious melodies, lush production, and charisma.” Now, as fall starts to settle in over Atlanta, East Chain artists Wili Hendrixs, Michael Aristotle, HQ Jonez, and Z92 walk me through the label’s origin and reflect on their summer-camp-themed compilation.

“When you put East Chain against anything else that’s in the city, it’s gonna look hella different. And it’s gonna look different in a good way because it stands out,” Z92 says of the label’s incomparable style. “We got niggas from South Georgia, you feel me? You can’t emulate that soul, especially when you bond with somebody else. A lot of this shit came together through relationships, and that’s how it should be.”

In fact, before the label ever thought about going to camp on their compilation album earlier this summer, the most tenured East Chain members were already used to living in close quarters with each other. Wili Hendrixs, Michael Aristotle, HQ Jonez, and Da Kidd Half grew up within a 21-minute radius of each other.

Although they would hang out, they didn’t collectively form a close relationship until they went to college at the Art Institute of Atlanta, which Michael Aristotle sums up as a “fake college with hella iMacs.”

“At one point, we was all in college together, and we all lived in one room,” Wili Hendrixs says. “It was six guys, one room, one bathroom. You can imagine how much chaos was in one house, and that kind of made the music even better.”

While their family-like bonds were built in those tight — and potentially unlawful — living conditions, all four of them dropped out of college at the beginning of 2012. It would be roughly one year later before any of them would even mutter the words “East Chain.” Their label was eventually birthed, of all places, at Wili’s sister’s baby shower on April 27, 2013.

“Wili was picking me up, so I got in the car,” Michael Aristotle says, recounting that unforgettable day. “The first thing Willie says, ‘It seem like don’t nobody want to sign us and don’t nobody know what to do with us. Man, I’m ’bout to make my own label.’ I was like, ‘Shit, I’ll sign.’”

Michael ended up spending the entire baby shower racking his brain for the perfect name for the fledgling label, and within a matter of hours, he managed to come up with one.

“By the end of the baby shower, I catch him in the hallway. I’m like, ‘I got it — East Chain.’” Aristotle continues, “He’s like, ‘It sounds nice, but what does it mean?’” Aristotle explains, “East is for East Side, and Chain is for Golden Chain Drive, which is where we started recording at Wili’s crib.”

Following the isolation imposed on everyone during quarantine last year, East Chain decided to rekindle its artists’ creative synergies by returning to its roots and reuniting everyone under one roof. They rented out an Airbnb for a music-making camp in the fall of 2020. From there, CAMP EAST was born.
“When we started the project, Iri said we should do this how we used to do it, like recording in one room,”

Wili Hendrixs says. “We should do this together instead of sending files. When we’re around each other, we just sharpening each other — pushing each other. So we had rented an Airbnb out last September, brought all the homies, and told everybody that we wanted on the project to come through.”

“They came in, and then we worked on the music,” Wili continues. “First night we did three songs, but it was like a madhouse — beats everywhere. Every room had a setup going crazy, and then we would go record in the big room upstairs.” Wili credits Iri and Eric for seizing on the camp concept, which influenced the album’s release. “Since we went to camp, technically, we wanted to bring it out in the summertime. What the kids do? They go to camp. So that’s what influenced the rollout.”

With their compilation album behind them and the summer of 2021 now a thing of the past, East Chain looks onward from CAMP EAST to the next phase of their journey. One of their goals is to reach the point where they have enough quality releases at their disposal to fill a calendar, like the ones that iconic labels such as Roc-A-Fella Records and Young Money Entertainment used to slip into their artists’ album packaging. Of course, another goal of theirs is to release a new compilation album. But most importantly, East Chain aims to make the best music possible, regardless of today or tomorrow’s trends.

“If you, the artist, service the people. It’s not like a regular business where the customer’s always right. You got to set the mood,” HQ Jonez says, likening their craft to a profession that requires restraint and responsibility. “You kinda like the doctor. You gotta diagnose what you see the world needs, and you give your medicine to the world.”

As our interview at beSOCIAL in West Midtown wraps up, Michael jokingly proclaims, “East Chain is the future!” Even in jest, his comment reflects the independent label’s determination to push the craft of hip-hop forward. For that very reason, fate may have it that East Chain one day gets added to the list of legendary Atlanta rap collectives after all.

For now though, get familiar with the members of East Chain below.

Artist, songwriter, producer
Age: 28
Instagram: @itzhqjonez
Twitter: @itzhqjonez
Current focus: “Me and Mike 24K have a project coming out soon called Worth the Weight, and after that, just producing, writing, and making more songs — more ideas.”
Favorite hip-hop group or collective: OutKast, Organized Noize, Dungeon Family, TDE, 1500 or Nothin’, Cash Money, and Young Money
Style: “My city nickname is P-Funk, so I got to bring the funk. I got to bring the soul. I bring honesty, and I dare to be different. I just be me and let the chips fall.”
Favorite track on CAMP EAST: “Protect My Vibe” featuring Da Kidd Half and Ace Apollo

Artist, songwriter
Age: 24
Instagram: @kadagreat
Twitter: @KaseyAvenues
Current focus: “Currently, I’m songwriting and sharpening up my vocals. I know a lot of people are still wondering if I’m R&B or if I’m hip-hop, … but my next project (will) show versatility and how I can tap into each genre and put my twist on it.”
Favorite hip-hop group or collective: OutKast and Bad Boy Records
Style: “My style changes a lot because I grew up listening to a lot of genres — pop, R&B, hip-hop, country, dancehall. But R&B is home for me. I listen to a lot of Bryson Tiller, Chris Brown, Blxst, and I’m just trying to be on the list now.”
Favorite tracks on CAMP EAST: “Grand Marquis” featuring Kasey Avenues, Michael Aristotle, Da Kidd Half, and HQ Jonez; and “GOAT” featuring Kasey Avenues, Da Kidd Half, Michael Aristotle, and HQ Jonez

Founder, artist, songwriter
Age: 28
Instagram: @michaelaristotle
Twitter: @mikeyaristotle
Current focus: “My album, Dekalb — It’s short for Dekalb County, and yeah, it’s album number two.”
Favorite hip-hop group or collective: Roc-A-Fella Records, Ruff Ryders, Maybach Music Group, and So So Def
Style: “Lyricism — You can hear an up north undertone a bit, but then you hear the Southern beats that Wili does. I kind of blend those worlds.”
Favorite track on CAMP EAST: “Yo Baby Daddy a J” featuring Michael Aristotle, Da Kidd Half, and BOREGARD.

CEO, producer, artist
Age: 28
Instagram: @wili_hendrixs
Twitter: @WiliHendrixs_
Current focus: “I’m working on the homies’ projects right now, and I did a couple of joints with Monica that’s soon to come out. And I gotta dope one with Travis Porter. Ready for that one to come out — the streets need it.”
Favorite hip-hop group or collective: OutKast and Migos
Style: “I try to put a lot of my personality in the music when I’m producing and use a lot of different sounds, techniques, cadences, and all that stuff. It’s something different.”
Favorite track on CAMP EAST: “Shine On Me” featuring Wili Hendrixs, Da Kidd Half, Jaye Newton, and Jaquebeatz

DJ
Age: 28
Instagram: @iamz92
Twitter: @iam_Z92
Current focus: “Right now, I’m running a DJ workshop series, and I’m also preparing to launch this house group with my DJ partner, AEESB, who’s super dope.”
Favorite hip-hop group or collective: The Neptunes
Style: “I am a turntablist and battle DJ at heart, and I try to flex my skills whenever I DJ. That’s just me — I like to showcase skill in everything I do.”
Favorite track on CAMP EAST: “Pin Ups” featuring HQ Jonez and Da Kidd Half —CL— 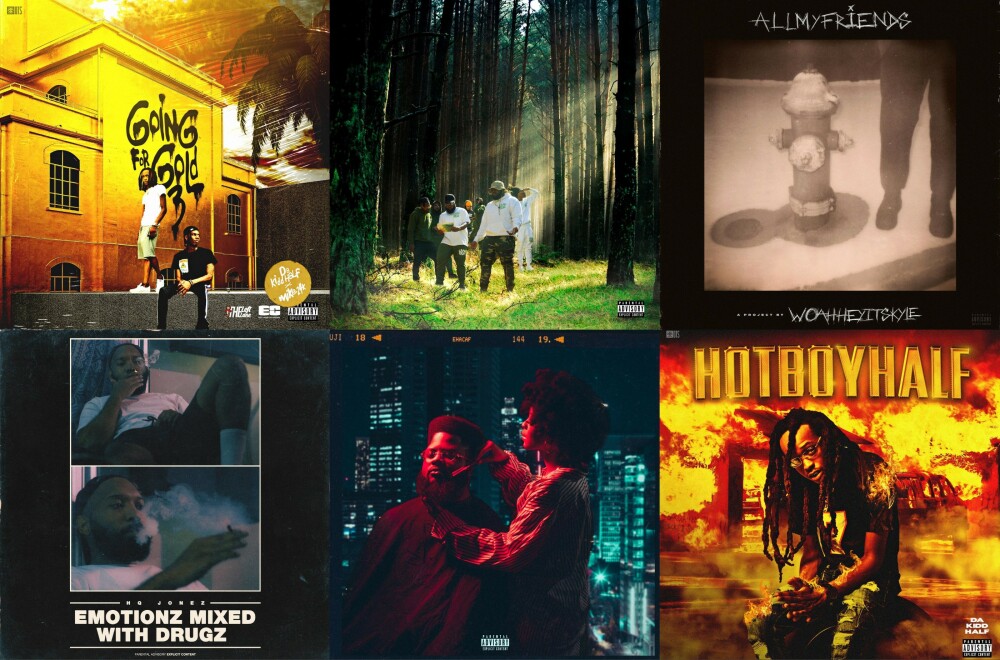 BIZNESS: East Chain has been pumping out quality projects for years. Photo by East Chain.