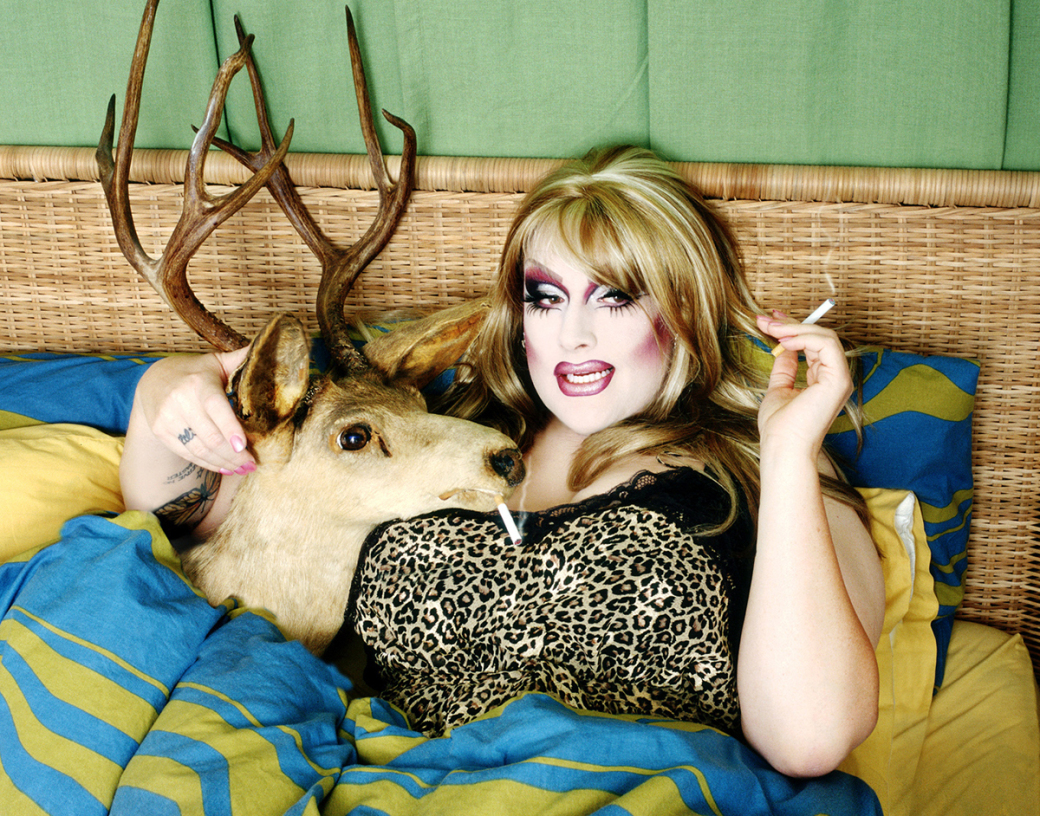 Photo credit: Austin Young
JACKIE BEAT IS COMING: And wants to ‘sleigh ride in leather with you’ and you and you.
By MS. CONCEPTION Wednesday December 1, 2021 01:12 AM EST

What’s hot in the A this winter? Vaccines, boosters and flu shots are all the rage. They pair great with social gatherings, family get togethers, the workplace and all public spaces ITP. Unless you find yourself in the wild west of “Buckhead City,” where they live by their own sets of rules. To be safe, check COVID deets on websites before attending anything below, as we know shit is constantly “subject to change” these days.

Wanna be a good person today? Do you have five minutes or less to go to cannabisincommon.org? Simply put in your zip and the site will call down the list of your Congresspersons. Leave voice messages, bc we know they never answer, politely reminding them that Americans have one thing overwhelming in common, ending cannabis prohibition. No doubt these politicians are all spending a majority of their time worrying about reelection, remind them who they work for and that #HempNotKemp is alive and well in GA.

Cute pandemic trends to keep: sanitizer everywhere, six-foot minimum personal space, masks, everything cashless and delivered and WFH! Can’t do needles? Keep that mask on, honeypot. For those who are ready to step out, read on for The Move.

Disclaimer: The Move does not recommend Twitter in life or in this column. Any @handles mentioned below are for Instagram.

Marie and Rosetta, Kenny Leon’s True Colors Theatre Company at Southwest Arts Center — Belatedly acknowledged as the Godmother of Rock ‘n Roll, Sister Rosetta Tharpe shattered every barrier that she faced as she made her mark on the music world. Allow The Move to save you a Google … “Tharpe’s reign began in the 1930s, included creating the first gospel crossover record, hitting number two on the Billboard ‘race records’ chart (now the R&B chart), and was among the first gospel musicians to appeal to rhythm-and-blues. … Known as ‘the original soul sister’ and ‘the Godmother of rock ’n’ roll,’ Tharpe’s music is cited as an influence on Little Richard, Johnny Cash, Carl Perkins, Chuck Berry, Elvis Presley, Jerry Lee Lewis, Muddy Waters, Eric Clapton, Jeff Beck and Keith Richards, and many more. Inducted posthumously into both the Rock and Roll Hall of Fame the Blues Hall of Fame, yes, overall, Tharpe is a big friggin’ deal in music. But who is Marie?

Marie Knight was born in 1925, possibly in Georgia, but the jury is still out. She was definitely raised in Jersey. With gospel roots. Knight toured with greats like Brook Benton, the Drifters, and Clyde McPhatter. Her version of “Cry Me a River” reached No. 35 on the Billboard R&B chart in 1965.

But, before that, Sister Rosetta Tharpe saw a young Marie Knight singing at the Golden Gate Auditorium in Harlem, on a bill with Mahalia Jackson, and invited Knight to join her on tour. Tharpe called Knight’s contralto voice “something special.”

Marie and Rosetta chronicles, yes, Tharpe’s journey with Knight. Now seemingly unimaginable Jim Crow laws then forced the duo to performances in limited venues and find lodging on the road in funeral homes and other places listed in the Green Book.

This theater production was written by George Brant and directed by Andrea Frye, with music direction by S. Renee Clark.

Club Hertz Live —  Club Hertz is a scene dominated by local musicians, playing an extreme variety of genres in a lounge. The production is running with a calendar full of performances by different musicians, bands, and performers throughout the month of December at Alliance Theatre. Below are just three of the groups performing during Club Hertz Live.

Gold Shades is a band, production and songwriting group based in Atlanta by way of Bowie, MD and Honolulu, HI. The group, formed at Morehouse College in 2011, consists of twins Marlon and Julian Booker and Gary “Stello” Clark, II. Their music can be classified as diverse Pop/Funk, from players with classical training. Collectively, the three play more than a dozen instruments, and compose, and arrange all their material. They’ve played Harlem’s Apollo Theater and in Atlanta opening for Jagged Edge and Avant. In January, 2019, Gold Shades celebrated the release of their self-titled debut album, at Smith’s Olde Bar with a sold-out show. $35, Thur, Dec. 9, 7:30 p.m.

Songwriter and performer Anita Aysola is “armed with lyrical wit, virtuosic piano runs, and a sultry-sweet voice reminiscent of the golden age of jazz.” A musical mixologist who infuses jazz, blues, classic rock and traditional Indian sounds Atlanta’s venue walls haven’t heard enough of. Anita’s pipes are so unique, she’s been one of the few chosen to cover Sade in Atlanta Collective’s annual performance of the album “Love Deluxe”.

Aysola latest original single “Heartbeat,” was written in response to Georgia’s abortion ban, debuted exclusively in Rolling Stone India for its powerful call to action, and is the recipient of several awards including the 2020 L.A. Music Video Award for Best Social Commentary. Sun., Dec. 12, 2:30 p.m.

ozello is a self-described “six-piece queercore band of punks with songs about love, death, and the queer experience growing up in the Deep South.” The bulk of their music is written by lead singer, Jeofry Wages and ranges from bluegrass and punk to musicals and indie rock. At the core of their songs is an examination of different facets of life, death, hurt, and healing through a queer lens.

Along with live music, two performances of “Moms Unleash on Christmas” — a cabaret that celebrates all the beauty and weirdness of a being a working actor mom — and two nights of comedy.

“A refreshing, rockin’ take on the adventures of Ms. Alice, here rendered not as a dainty lady, but as an indie-like musician, as cool as the Cheshire Cat.” — Chris Jones, Chicago Tribune.

It started in 1998 with Jesus Christ, It’s Your Birthday!, the “bile-filled” Ms. Beat’s delightful non-denominational holiday tribute. Seasonal songs included “Sleigh Ride in Leather With You” and “Black Christmas.” Followed by a prominent feature in “The Catholic League for Religious and Civil Rights’ Report on Anti-Catholicism” and this holiday tradition was born.

It’s time to stuff your stocking with a delightfully deranged mix of “classics” like Jackie’s “(cocaine-fueled) rewrite of ‘Let It Snow,’ the pregnancy confessional, “Santa’s Baby,” a menorah-loving “Jew Christmas,” a booze-infused spin on “Happy Holidays” called

“Alcoholidays,” the STD cautionary tale “It’s Beginning To Look A Lot Like Syphilis,” and the Britney-inspired banger “Oops ... It’s Christmas Again,” as well as an abundance of brand-spanking new material.

Beat has been awarded Best Drag Queen by New York Press and Best Live Performance by HX Magazine. Jackie is also a columnist, lead singer for the electro-rock band Dirty Sanchez, and the subject of the documentary film, My Name is Jackie Beat including commentary from Joan Rivers, Margaret Cho, and, the now canceled, Roseanne Barr.