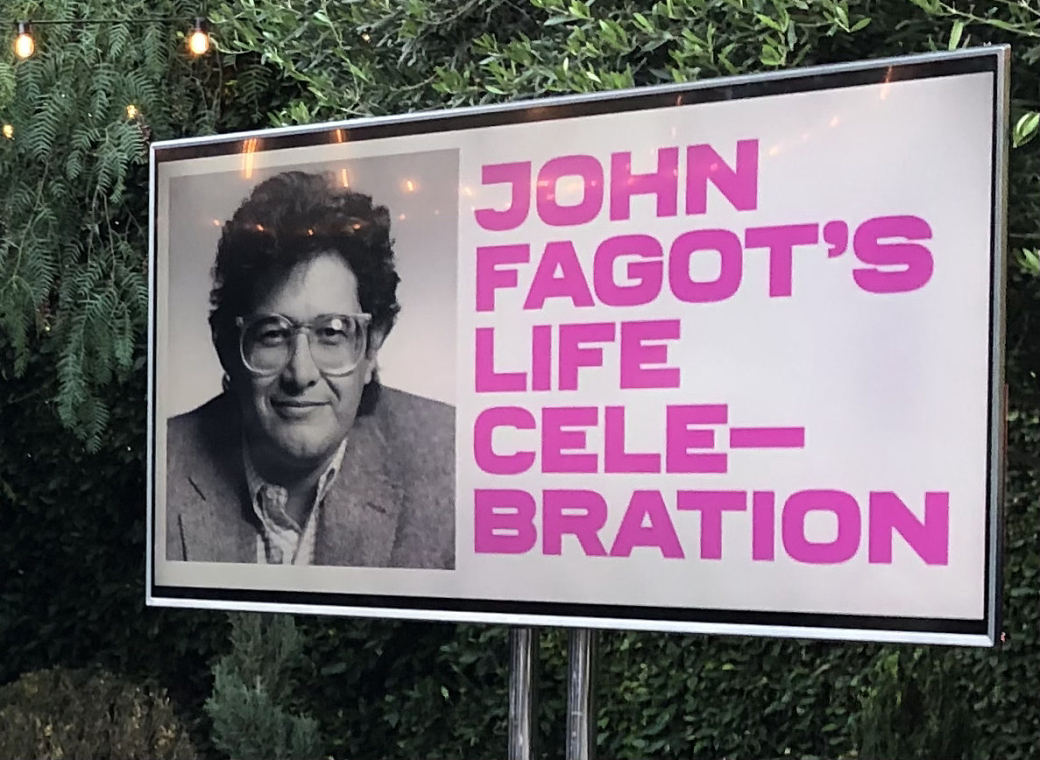 “Fagot. John Fagot,” he would say as he leaned into you and looked you in the eye, allowing you to be introduced to him. There was a stern look on his face, yet a gleam in his eye as he said his name, daring you to say anything derogatory back to him.

John Fagot died in Los Angeles Nov. 2, the same day his beloved Atlanta Braves won the 2021 World Series and and others celebrated All Souls’ Day and Day of the Dead. Born in Nicaragua, he grew up in Tampa, Florida, where he attended Jesuit High School. But it was Atlanta that he called home, the city where he moved to attend Georgia State University, met his wife Lucy and started his family.

The first time I remember meeting John was at Franklin Music, a record store in Lenox Square. He was dressed wearing a coat and a tie. A far cry from the t-shirts and jeans of the rest of the employees. It must’ve been 1975, ’76.

I didn’t really get to know John until sometime in 1977. I was working the night shift at Peaches Records and Tapes on Peachtree, and John started working there, too. I was 19. I didn’t know how old John was, but I could tell he was older. Fifteen years older, it turned out.

John had a thing then, of posing like Iggy Pop on the cover of The Idiot, with a dumb look on his twisted face and his two hands outstretched, parallel with each other, but not really, if you remember that album cover.

He also used to wear an Iggy Pop, Lust for Life t-shirt. The cover for that album was simple, with a close-up of a smiling Iggy’s face. But on John, who was broad — and had maybe even gained some weight since acquiring the t-shirt — it stretched across his chest, and the usually gaunt Iggy looked more like Paul McCartney.

One of the many trade magazines that wrote of John’s death published that John started working in the mailroom at CBS Records fresh out of college and rose through the ranks to become the head of promotions at Columbia, and then two other major labels.

John started working a job in Atlanta city government after graduating from Georgia State University with a B.S. in Urban Planning and a minor in Chemistry, but that’s not where his head was at. He loved music. And after putting in an eight-hour day, he would go to work at Franklin Music, hence the coat and tie.

Once he started at Peaches — he also did a stint at Oz Records and Tapes on Peachtree, flying monkeys and all — he was also the music editor at the Atlanta Gazette, an alternative weekly publication in Atlanta in competition for local ad dollars with Creative Loafing.

At the same time, I was writing music articles for the The Signal, Georgia State’s student newspaper. Since we were both writers, we got invited to a lot of record company press parties — and we would many times go together.

I remember one lunch in particular. It was for Johnny Winter at the CBS branch. Back then, record companies spared no expense and had lavish, catered affairs to promote an artist and their latest album release, with the branch employees, key retail, and the press invited.

John had been sitting close to the Texas guitar slinger that afternoon, and, after the usual questions about musical influences, styles, and the new record had been posed, John stood up, commanded the floor, and leaned into Winter. “Johnny, I’ve got a more personal question for you. One you might not want to answer, but, between you and your brother Edgar, which one of you has the bigger …” and suddenly, the room went quiet, and John continued, “which one of you has the bigger feet?” You could hear a collective sigh of relief from the branch suits.

I have three older sisters, the older two are twins, and one day I happened to mention to them my new friend John Fagot.

“Oh, Johnny Fagot!” they both exclaimed. “He married Lucy!” They both became really animated remembering John from their college days. “We used to call him Count Fagot. He would get up onstage with bands wearing a cape and sing at fraternity parties, and fall to the ground, and someone would pick him up just like James Brown.”

The next night at Peaches, I addressed John as “Count Fagot.” He got a look on his face like a dear caught in the headlights of an oncoming car.

But, with John, a lot of times his exclamations of denial revealed the truth.

January 5, 1978, the Sex Pistols made their U.S. debut at Atlanta’s Great Southeast Music Hall in what was then Lindbergh Plaza. John and I were both working the dayshift by then, but John didn’t show up for work that day.

When I got to the show, and finally got in, John was already there. “Where you been?”

John had been hanging out all day at the Music Hall with the Sex Pistols.

Atlanta had a small music community back then. Everyone knew each other — and everyone loved John. So, when he showed up at the Music Hall, no one objected to him pretending to be part of the cleaning crew!

He hung out at soundcheck, had many beers with the band. Remember, at this time, the Sex Pistols were considered the most dangerous band on the planet. The show was attended by members of the FBI, the GBI, the Georgia State Patrol, the Tennessee State Patrol, and many other law enforcement agencies.

John’s take on the band? They were all really nice guys — except they drank beer in green glass bottles!

John had a thing about beer. You only drank beer that came in brown or clear bottles. Beer in green bottles wasn’t beer. It was pretentious.

In addition to attracting a multitude of law enforcement officers, the Sex Pistols’ American debut was a huge media circus. All of the major T.V. networks and wire services had people there. One of the major network reporters stopped John as we were leaving the show and asked him what he thought of the Sex Pistols. John was wearing ripped jeans. With the cameraman zooming in on him, John said, “I’ll show you a Sex Pistol” and unbuttoned his pants. I never saw that footage on the nightly news.

There are a million stories I could tell about John — and I will. Like the time he and I and someone else were heading west into Atlanta on I-20, and suddenly, John looked out the window and yelled, “Stop the car!” He started yelling, “Hodgee! Hodgee!” and jumped out of the car and ran across the four-lane expressway, up a hill and jumped the fence. I never thought I’d see him again.

There was the day we were working at Peaches and John told me he had gotten tickets. For David Bowie. In Nashville. That night!

He figured if we left Atlanta immediately after work, with the time change, we could just make the show. And we did!

After the show we made the four-hour return trip to Atlanta and got a few hours sleep before work the next day.

Everyone who knew John Fagot has great stories to tell about him. And great feelings of love for him. If you and John got on, he was your best friend forever, long before the term “BFF.” was thrown around. And, knowing John as we did, we knew the love and friendship that emanated from John.

If he said something, or did something, that might embarrass you, he didn’t do it out of meanness or spite. He did it out of love, to challenge you to embrace your weakness or fears, and to overcome them.

I think one of the things that made John so good at his job — he was Senior Vice President of Promotion at Columbia, Capitol and Hollywood Records during his long tenure in the music business — is that, to him, there were no sacred cows. Everyone was a person. Equal.

Whether he was working with Paul McCartney, Bruce Springsteen, Billy Joel, Bob Geldof or some new act with their first record out, everyone was treated the same, with respect.

No one was larger than life.

In retrospect, I have to say, no one but John.

And that’s not to say he was egotistical. Or had a big head. Quite the contrary. But, with all of the stories that people tell about him, while they may seem exaggerated, extreme, incredulous, even, they are not. Because with John, and the way he lived his life, the love he had for his family — Lucy, Mary, and Chris — was greater than any story you could make up, any fantasy you could imagine.

As I said earlier, a trade magazine reported that he started in the mail room at CBS.

But John wasn’t some kid, fresh out of school, with no idea of what he wanted to do in life. John had goals. And he had ambition. He wanted to do the best he could for his family.

He told me on the floor at Peaches, “There’s a mailroom position at CBS. I’m going to apply." He knew it wasn’t the type of job a man of his age, his level of education and his experience would normally take.

But, he also knew himself. Who he was. And, that once he got his foot in the door, there would be no stopping him. And there never was. —CL—