ABOUT TOWN: Listen and learn in March 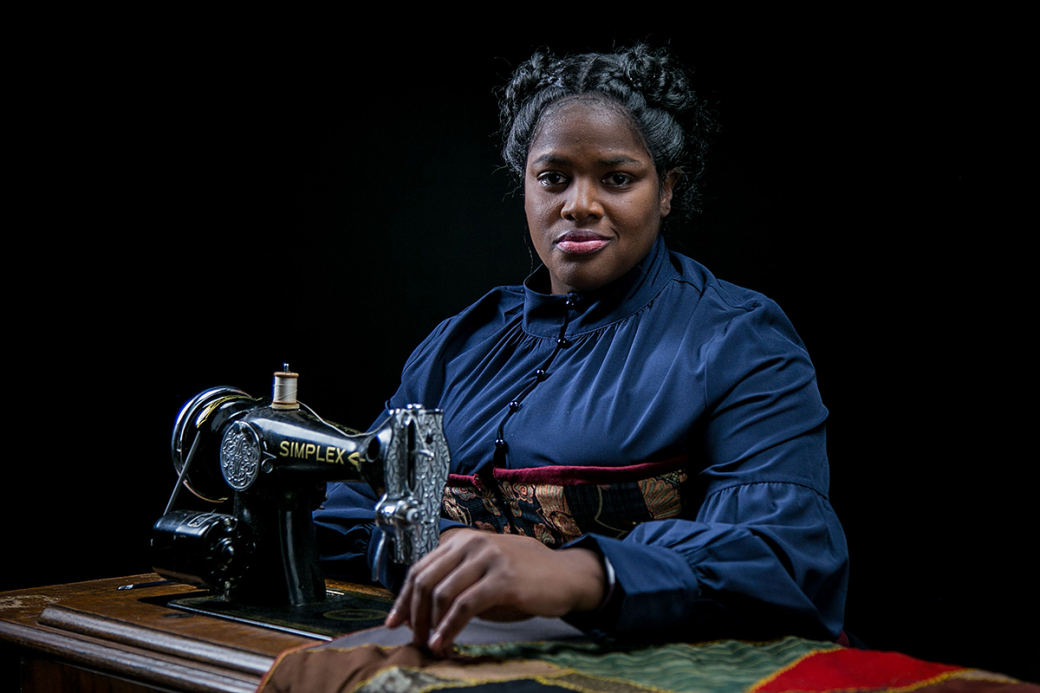 
Abortion rights rally, International Women’s Day, Downtown Atlanta — A march in support of abortion rights is planned for downtown Atlanta on International Women’s Day. The Abortion on Demand & Without Apology rally will set off on Tuesday, Mar. 8 at 3 p.m. at the corner of Peachtree Street and Edgewood Avenue. “Fill the streets with serious determination and rebellious joy,” organizers urge in an advert. “Our only way forward is to resist.” Protesters are encouraged to bring signs, costumes, banners, coat hangers, and friends.
Free. 3 p.m. riseup4abortionrights.org


Ain’t Too Proud – The Life and Times of The Temptations, The Fox Theatre — The first national tour of the hit Broadway musical “Ain’t Too Proud – The Life and Times of The Temptations” will have a week-long run at the Fox Theatre in March. The eminent vocal quintet formed in 1960 (as The Elgins) on the streets of Detroit and went on to become an R&B phenomenon with 42 Top Ten singles and as many albums. Melvin Franklin, Paul Williams, Eddie Kendricks, David Ruffin and Otis Williams were in the “Classic Five” lineup of their heyday, and the latter member still fronts a touring version of the band. Actors portraying the musicians bring along the signature sharp suits, tight harmonies and smooth dance moves in “this thrilling story of brotherhood, family, loyalty, and betrayal set to the beat of the group’s treasured hits,” a press release enthused.
$40+ Tue., Wed., Thu., 7:30 p.m. Fri., 8 p.m. Sat., 2 p.m. & 8 p.m. Sun., 1 p.m. & 6:30 p.m. 660 Peachtree Street, NE. 404-881-2100 FoxTheatre.org @TheFoxTheatre


Intimate Apparel, Actor’s Express — Esther is a Black seamstress living in a New York City boarding house in 1905 who sews lingerie for Upper East Side big shots as well as downtown prostitutes. Her skills and discretion have garnered her a steady clientele but she remains lonely and longs for a wealthy husband who could fund her own beauty parlor. The playwright is MacArthur grant recipient and two-time Pulitzer Prize winner Lynn Nottage whose play received top awards from the New York Drama and Outer Critics circles. Viola Davis took the lead role in the first cast on Broadway in 2004. This time Esther is played by Vallea E. Woodbury, known for portraying the character Tituba in the Actor’s Express production of “The Crucible,” as well as making local appearances in “Ain't Misbehavin'” (Stage Door Players), “La Cage aux Folles” (Out Front), and “Bob's Marley's Three Little Birds” (Synchronicity Theatre). The Wall Street Journal called “Intimate Apparel” one of the “very best plays in the past quarter-century.”
Thu., Mar. 24-Sun., Apr. 17. 8 p.m. daily. Sun., 2 p.m. King Plow Arts Center,,887 West Marietta Street NW. Studio N-103 404-885-9933 actors-express.com @aexpress


The Atlanta Science Festival, Piedmont Park & various locations — The 2022 edition of the Atlanta Science Festival will delve into the environment, earth and space, the animal kingdom, the arts, and health and the human body. There will be nature walks, creature encounters, hands-on experiments, and science-themed performances throughout the city during its two-week run. The ninth annual festival wraps up with a party in Piedmont Park dubbed the Exploration Expo. Executive Director Meisa Salaita says the ASF “has become synonymous with engaging and accessible science exploration for all ages, while celebrating diversity and our city as a science hub.” Science lovers from around the world get to experience the events online. “Today science is more relevant than ever,” Salaita says. “And just as science evolves, our festival continues to grow and expand in ways we never thought possible.”
Many events are free of charge, but some require a nominal fee. Sat., Mar. 12 - Sat., Mar. 26. Multiple venues in Atlanta. atlantasciencefestival.org @ATLSciFest


Tick, Tick... Boom!, Pinch ‘n’ Ouch Theatre — The man who wrote the smash rock musical “Rent” also came up with “Tick, Tick... Boom!” The late Jonathan Larson’s autobiographical piece tells the story of a longtime waiter on a losing streak who desperately wants to make it big in the world of theater. Set in 1990, the composer and lyricist recounts his struggles and sacrifices and their effects on his fiancée and friends while pounding the road to success. Grant McGowen will play the leading role of Jon; McGowen was last seen on stage in “Hedwig and the Angry Inch” and “Glengarry Glen Ross.” Atlanta-based musician Ian Cole will make his first local appearance as an actor playing Jon's best friend Michael. The story is also the subject of a new film by Lin-Manuel Miranda of “Hamilton fame, making his directorial debut with Andrew Garfield in the lead.
$30+ Fri., Mar. 4 - Sat., Apr. 23, 8 p.m. daily. Pinch ‘n’ Ouch Theatre, 195 Arizona Avenue, Unit LW01 Atlanta 678-701-6114 Pnotheatre.org @PnOTheatre


Comedy Night, The Laugh Loft — Half a dozen local comedians are now doing stand-up at a new venue in Avondale Estates above the Stratford Pub. Its first iteration in February saw a packed house and much merriment. Battle rapper Carter Deems was there and returns in March; he is a cast member on the MTV show “Wild ‘n’ Out” and a writer on the Emmy nominated series “Epic Rap Battles of History.” Deems also wrote for “Drop The Mic” on TBS and appeared on “Funny Or Die” and Snoop Dogg’s “Gladiator School.” Headliner Kareem “Plug” Chapman is a comedian, writer, and actor who holds court at the Comedy Store and the Laugh Factory in Los Angeles, as well as the Laughing Skull Lounge in Atlanta, where he teaches stand-up classes to aspiring comics. The host for the evening is Chapman’s former pupil Katherine Falen, known to insert plenty of her own funny bits. Mitchell Mack and Amy Sharma are on the bill too, and the ongoing series “will feature other comics new to the scene who are honing their craft at shows across Atlanta and surrounding areas,” says Falen.
$15 includes one free drink. Thu., Mar. 10, 8 p.m. The Laugh Loft, 17 North Avondale Road, Avondale Estates. 404-254-4538 stratfordpub.com


Georgia Food and Wine Festival, Marietta — A new food and booze festival comes to Cobb County this spring with myriad dishes, celebrity chefs and culinary experts. The festival is touting “a wide variety of events for all taste buds and budgets.” A main event on Saturday, Mar. 26 will offer tastings of 400 varieties of wine, beer and spirits, as well as cooking demonstrations from 50-plus restaurants and artisans around the South. ‘Classes From the Georgia Masters,’ ‘Oyster Roast VIP Lounge,’ ‘Drinks, Meat & Three,’ ‘Georgia’s Best Whiskey Cocktail Challenge’ and ‘Fired Up” are all on the schedule. “There will be so many great beverage tastings and participating restaurants, fantastic artisans and great live music,” says co-founder Jan Gourley.
$39-$290. (Save $10 on certain tickets with promo code MDJ10 until Mar. 20). Thu., Mar. 24-Sun., Mar. 27. Jim Miller Park, 2245 Callaway Road, Marietta. 770-528-8875 georgiafoodandwinefestival.com


Poetry Out Loud, Atlanta History Center — In partnership with the National Endowment for the Arts, the Poetry Foundation, and Georgia Council for the Arts, the Atlanta History Center is hosting the semifinal of the annual Poetry Out Loud contest. The virtual event determines who gets crowned state champion and wins a $200 cash prize. The victorious poet then goes on an all-expenses-paid trip to Washington DC to compete in the national finals. Poetry Out Loud “incorporates the dynamic aspects of slam poetry, spoken word and theater into English and drama classes,” the AHC says on its website. The competition helps students “improve public speaking skills, build self-confidence, and learn about the role great poetry plays in literature.”
Free. Sun., Mar. 13, 1 p.m - 4 p.m. Atlanta History Center online. atlantahistorycenter.com @AtlHistCenter poetryoutloud.org @PoetryOutLoud


No Remorse Comedy Tour, State Farm Arena — The controversial comedian Mike Epps returns to Atlanta with the No Remorse Comedy Tour at State Farm Arena. Epps has drawn ire for mocking the disabled and for using live animals during his act. Atlanta police once issued an arrest warrant for him alleging he assaulted a fellow comic. He acted in the sitcom “Grace Under Fire” as well as the cult film “Next Friday” and its sequel “Friday After Next.” Also appearing is Dominique, who worked in both those movies but got her start on HBOs “Def Comedy Jam,” winding up on NBC’s “Last Comic Standing” and “Chappelle’s Show” on Comedy Central, among others. Rounding out the bill is actor Jay Pharoah, who became known with his impersonation of Barack Obama on “Saturday Night Live” and voice roles on “Family Guy” and “BoJack Horseman.”
$59-$250 Sat., Mar. 26, 8 p.m. State Farm Arena, 1 State Farm Drive, Atlanta. statefarmarena.com @StateFarmArena