SCREEN TIME: Out on Film’s Eye on Atlanta 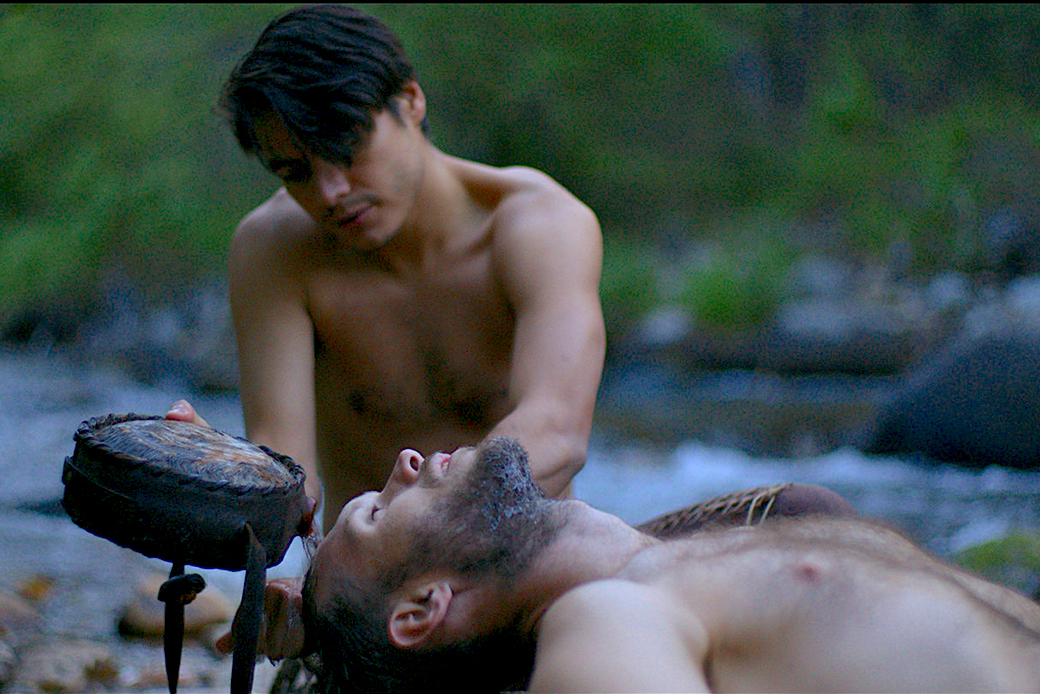 For his landmark play Angels in America, playwright Tony Kushner appended the subtitle “A Gay Fantasia on National Themes.” The same words could apply to writer/director Travis Fine’s Two Eyes, a low-budget but ambitious drama screening at the 35th annual Out on Film Festival.

Fine, a former Atlantan, gives Two Eyes a daring triptych structure. One narrative takes place in 2020 Wyoming as a suicidal trans songwriter (Ryan Cassata) finds help from a nonbinary therapist (Kate Bornstein). In 1979 Barstow, Calif., a soft-spoken high schooler (Uly Schlesinger) strikes a friendship with a free-spirited exchange student (Jessica Allain) And in Montana of 1868, a painter (Benjamin Rigby) parts from his family to find his muse in the wilderness.

Screening at 9 p.m., Sep. 29 at Landmark Midtown Art Cinema, Two Eyes tracks multiple characters on journeys of love and self-discovery against vast American landscapes. By the end, all three narratives inform each other in unexpected ways. It initially seems like a gimmick that shouldn’t work, but Fine sets a thoughtful, delicate tone so expertly, Two Eyes seems to thrive on vibes. And while the film affirms that gender and sexuality have always been more fluid and complex than their American mainstream perception, the film offers more than a didactic history lesson.

As artists paint canvases, take photographs or make music, it’s like a spirit of inspiration drifts from character to character, whether they’re on horseback in the 19th century or hitchhiking on modern highways. The soundtrack choices help reinforce the film’s swoony spell.

In the film’s last act some brutal realities intrude with tragic results that break Two Eyes’ trance. The United States has never been a haven of gay tolerance and it’s commendable that the film doesn’t suggest otherwise. It also falls into some overused tropes about which characters die and which ones learn from their sacrifices. Fine also spells out his themes more explicitly than necessary by the end, but Two Eyes communicates most eloquently when it avoids putting its ideas into words.

Fine is not the only current or former Atlantan with films at this year’s festival. Director Daresha Kiyi presents her formally conventional but emotionally devastating documentary Mama Bears, about devout Christian mothers who support their LGBTQ children despite the dogma of their churches. Mama Bears personalizes contemporary issues such as bathroom access to trans students at elementary and high schools. It’s the kind of documentary that sets a hopeful tone without soft-pedaling the destructive forces of homophobia and transphobia in religion and politics.

In Art and Pep, director Mercedes Kane offers a portrait of the relationship of Art Johnston and Pepe Peña, Chicago bar owners whose gay activism spans decades. Cara Consilvio also evokes the AIDS crisis with For the Love of Friends, which recounts how Brent Nicholson Earle drew attention to the disease by running the perimeter of the United States in 1986. And locally-based director Jono Mitchell offers the low-key chamber drama Miles From Nowhere about three young men who reveal secrets on a cabin getaway.

This year’s Out on Film has an opening night coup with Bros, the eagerly anticipated comedy from Billy Eichner screening Sep. 22. Of “Billy on the Street” and “Parks and Recreation” fame, Eichner has promised that the new film, which he stars and co-writes, will upend rom-com stereotypes with a gay sensibility. The festival closes Oct. 2 with the dark comedy Chrissy Judy.

The festival also offers a 40th anniversary screening of Grease 2 and will present the Out on Film Icon Award to Colman Domingo. The 35th Out on Film includes work from 27 countries, including23 narrative feature films, 17 documentaries and 16 shorts programs. Most of the fare will be available for streaming nationwide. —CL—
Thu., Sep. 22-Sun. Oct. 2. Passes range from $50-$185 packages. outonfilm.org