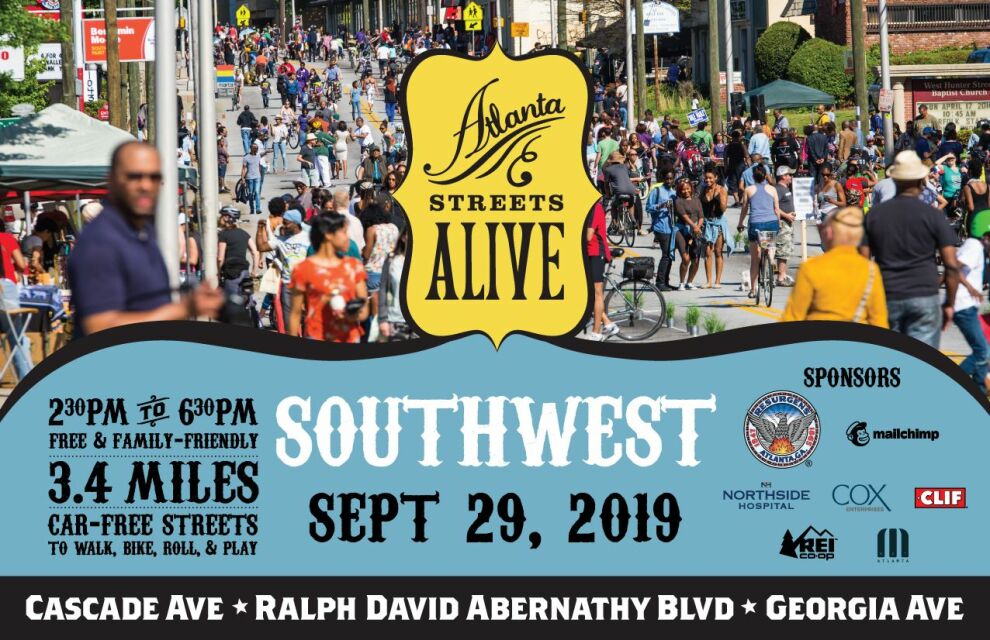 On Sunday, September 29, 2019, the Atlanta Bicycle Coalition activates Atlanta Streets Alive - Southwest, connecting 7 neighborhoods spanning from Cascade Avenue to Ralph David Abernathy Boulevard, and Georgia Avenue. We'll close the streets to cars and open them for people to walk, roll, bike, and play!
The fun kicks off at 2:00 pm with the official opening of the street followed by a parade of the route. Parade lineup is at 2:00 pm for a 2:30 pm launch. FREE bike decorations will be available while supplies last!

After the opening program and kickoff parade, visit Activity Partners and Route Hosts along the route for a wealth of interactive experiences hosted by community organizations, local businesses, and our sponsors. You can explore the open street from end to end or enter and exit the route at any cross street at any time during the four-hour activation.

Atlanta Streets Alive is FREE and fun for all ages. Come experience the history, culture, spirit, and pride in Atlanta’s southwest neighborhoods and communities. We invite you, your friends, and family to enjoy our city streets as public space.

Photographers will be active at Atlanta Streets Alive. If you do not wish to be in photos, please remove yourself from the view of the camera.
_ _
Southwest Route Update:
Atlanta Streets Alive is a program with an advocacy initiative that aims to advance safe streets for all. This year's routes are focused on areas slated for Complete Street improvements through Renew Atlanta.

In addition to safe streets, Atlanta Streets Alive is intended to promote sustainable transportation, including transit. The 71 Cascade Road bus route has nearly 500 riders on an average Sunday during the times of our proposed road closures. MARTA was unable to re-route the 71 Cascade Road route. We amended the original route along Cascade Rd, Cascade Ave, and Ralph David Abernathy Blvd, to the current configuration in alignment with our values, the Atlanta Streets Alive mission, and to avoid disrupting MARTA bus service or making the commutes of bus riders any more challenging.