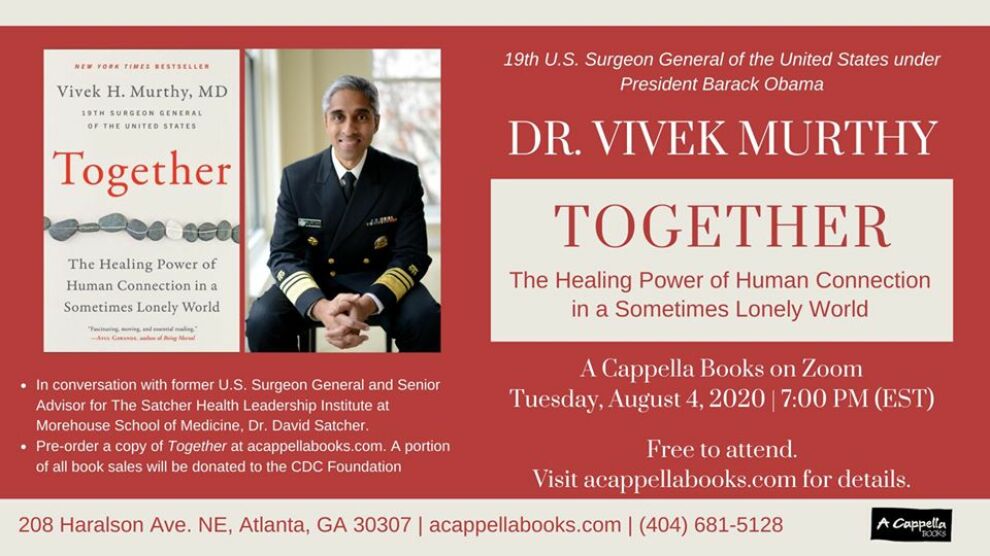 DUE TO THE CURRENT PANDEMIC CRISIS, WE FEEL IT'S IN THE PUBLIC'S BEST INTEREST TO HAVE ACCESS TO THIS IMPORTANT DISCUSSION. THEREFORE, THIS PREVIOUSLY TICKETED EVENT IS NOW FREE TO ATTEND.

Dr. Vivek Murthy, who served as the 19th Surgeon General of the United States under President Barack Obama, joins us for a special virtual event to discuss his New York Times bestseller, “Together: The Healing Power of Human Connection in a Sometimes Lonely World.” Dr. Murthy’s prescient message is about the importance of human connection, the hidden impact of loneliness on our health, and the social power of community.

The author will appear in conversation with former U.S. Surgeon General and Senior Advisor for The Satcher Health Leadership Institute at Morehouse School of Medicine, Dr. David Satcher.

To join this event and to pre-order a signed copy of “Together” via the link below. A portion of all sales will be donated to the CDC Foundation.

Humans are social creatures: In this simple and obvious fact lies both the problem and the solution to the current crisis of loneliness. In his groundbreaking book, the 19th surgeon general of the United States, Dr. Vivek Murthy, makes a case for loneliness as a public health concern: a root cause and contributor to many epidemics sweeping the world today from alcohol and drug addiction to violence to depression and anxiety. Loneliness, he argues, affects not only our health, but also how our children experience school, how we perform in the workplace, and the sense of division and polarization in our society.

But, at the center of our loneliness is our innate desire to connect. We have evolved to participate in community, to forge lasting bonds with others, to help one another, and to share life experiences. We are, simply, better together.

The lessons in "Together" have immediate relevance and application. These four key strategies will help us not only to weather this crisis but also to heal our social world far into the future.

Spend time each day with those you love. Devote at least 15 minutes each day to connecting with those you most care about.
Focus on each other. Forget about multitasking and give the other person the gift of your full attention, making eye contact, if possible, and genuinely listening.

Embrace solitude. The first step toward building stronger connections with others is to build a stronger connection with oneself. Meditation, prayer, art, music, and time spent outdoors can all be sources of solitary comfort and joy.

Help and be helped. Service is a form of human connection that reminds us of our value and purpose in life. Checking on a neighbor, seeking advice, even just offering a smile to a stranger six feet away, all can make us stronger.

During Murthy’s tenure as Surgeon General and during the research for "Together," he found that there were few issues that elicited as much enthusiastic interest from both very conservative and very liberal members of Congress, from young and old people, or from urban and rural residents alike. Loneliness was something so many people have known themselves or have seen in the people around them. In the book, Murthy also shares his own deeply personal experiences with the subject--from struggling with loneliness in school to the devastating loss of his uncle who succumbed to his own loneliness, as well as the important example of community and connection that his parents modeled. Simply, it’s a universal condition that affects all of us directly, or through the people we love—now more than ever.

Dr. Vivek H. Murthy served as the 19th Surgeon General of the United States appointed by President Barack Obama. As the Vice Admiral of the U.S. Public Health Service Commissioned Corps, he commanded a uniformed service of 6,600 public health officers globally. During his tenure, Dr. Murthy launched the TurnTheTide campaign, catalyzing a movement among health professionals to address the nation’s opioid crisis. He also issued the first Surgeon General’s Report on Alcohol, Drugs, and Health, calling for expanded access to prevention and treatment and for recognizing addiction as a chronic illness, not a character flaw. An internal medicine physician and entrepreneur, Dr. Murthy has co-founded several organizations: VISIONS, an HIV/AIDS education program in India; Swasthya, a community health partnership in rural India training women as health providers and educators; software company TrialNetworks; and Doctors for America.


Dr. Murthy received his bachelor’s degree from Harvard and his M.D. and M.B.A. degrees from Yale. He completed his internal medicine residency at Brigham and Women’s Hospital in Boston and later joined Harvard Medical School as faculty in internal medicine. His research focused on vaccine development and later on the participation of women and minorities in clinical trials. Dr. Murthy resides in Washington, D.C. with his wife and two young children.