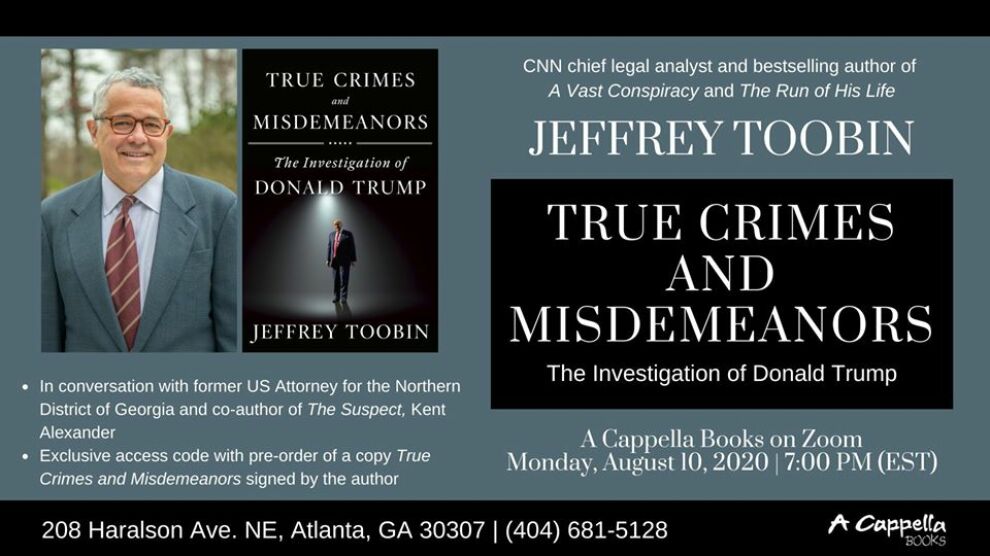 Courtesy of Jeffrey Toobin and A Cappella Books
Cost: $30,

Join A Cappella Books for an exclusive virtual event with the author, who will present his new book, “True Crimes and Misdemeanors: The Investigation of Donald Trump,” on Zoom Monday, August 10, at 7 P.M. Toobin will appear in conversation with former US Attorney for the Northern District of Georgia and co-author of "The Suspect: An Olympic Bombing, the FBI, the Media, and Richard Jewell, the Man Caught in the Middle," Kent Alexander.

Order a signed copy of “True Crimes and Misdemeanors” via the purchase button below to obtain your private invitation link. Please be sure to include your current email address at checkout. Your access code will arrive via email from A Cappella Books a day ahead of the program.

Pre-order a signed copy of “True Crimes and Misdemeanors” via the purchase button below to obtain your private invitation link. Please be sure to include your current email address at checkout. Your access code will arrive via email from A Cappella Books a day ahead of the program.

At checkout, choose between the local delivery, curbside pick-up, or shipping options. For zip codes not listed in the above banner, select curbside pick-up or USPS shipping.

Donald Trump’s campaign chairman went to jail. So did his personal lawyer. His long-time political consigliere was convicted of serious federal crimes, and his national security advisor pled guilty to others. Several Russian spies were indicted in absentia. Career intelligence agents and military officers were alarmed enough by the president’s actions that they alerted senior government officials and ignited the impeachment process.

Yet despite all this, a years-long inquiry led by special counsel Robert Mueller, and the third impeachment of a president in American history, Donald Trump survived to run for re-election. Why?

Jeffrey Toobin’s highly entertaining definitive account of the Mueller investigation and the impeachment of the president takes readers behind the scenes of the epic legal and political struggle to call Trump to account for his misdeeds. With his superb storytelling and analytic skills Toobin recounts all the mind-boggling twists and turns in the case–Trump’s son met with a Russian operative promising Kremlin support! Trump paid a porn star $130,000 to hush up an affair! Rudy Giuliani and a pair of shady Ukrainian-American businessmen got the Justice Department to look at Russian-created conspiracy theories! Toobin shows how Trump’s canny lawyers used Mueller’s famous integrity against him, and how Trump’s bullying and bluster cowed Republican legislators into ignoring the clear evidence of the impeachment hearings.

Based on dozens of interviews with prosecutors in Mueller’s office, Trump’s legal team, Congressional investigators, White House staffers, and several of the key players, including some who are now in prison, “True Crimes and Misdemeanors” is a revelatory narrative that makes sense of the seemingly endless chaos of the Trump years. Filled with never-before-reported details of the high-stakes legal battles and political machinations, the book weaves a tale of a rogue president guilty of historic misconduct, and how he got away with it.