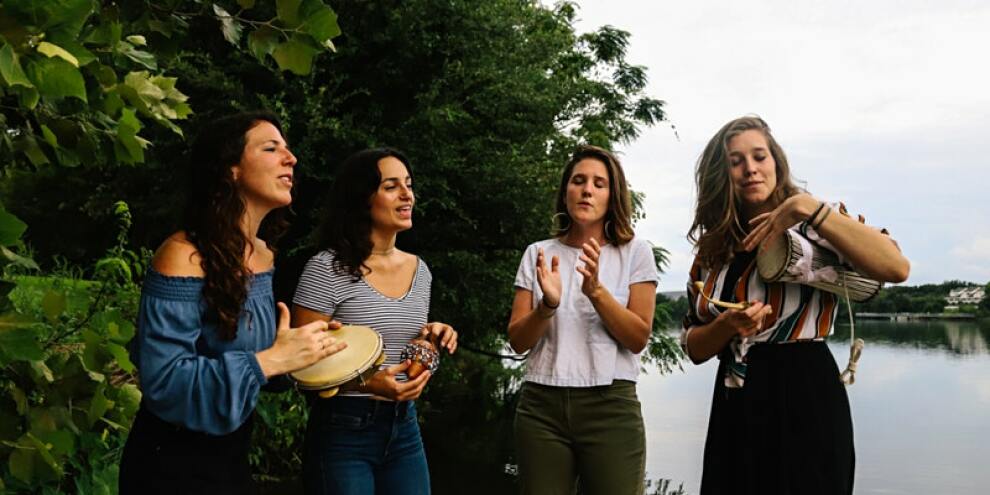 Four voices coalesce, rooted in rhythm. Raised on the North American traditions of blues, folk, and soul and inspired by their world travels, the four women of Ley Line transcend genres and languages. Ley Line creates a global soundscape; blending influences from Brazil, Latin America and West Africa. Dynamic harmonies run like a current through textures of stand up bass, guitar, ukulele and world percussion. With strong ties to world folklore traditions, Ley Line’s multilingual compositions evoke the beauty of the human experience through our connection to nature and each other.

Ley Line was created in 2016 as the merging of two duos. The band was born during the completion of their premier album Field Notes, and their self-managed tour from Texas to New York. From that point on, Ley Line has been touring nationally and internationally, performing at music festivals, facilitating educational programs for youth, recording original music and collaborating with other artists. Ley Line has performed at Austin City Limits Music Festival, SXSW, The Northwest String Summit, Kerrville Folk Festival and alongside Bonnie Paine of Elephant Revival at the Telluride Bluegrass Festival. Ley Line is acknowledged by their hometown of Austin, Texas as nominees for the Austin Chronicle’s 2020 Band of the Year and Album of the Year. In 2019 they won a major grant through the artist development program Black Fret and have been featured as “artist of the month” on KUTX.