Adron and the perfect cocktail for a night with Fantasy Guys

It is essential to find the right cocktail to sip on while Fantasy Guys and Adron's songs fill the air on these sultry summer nights. 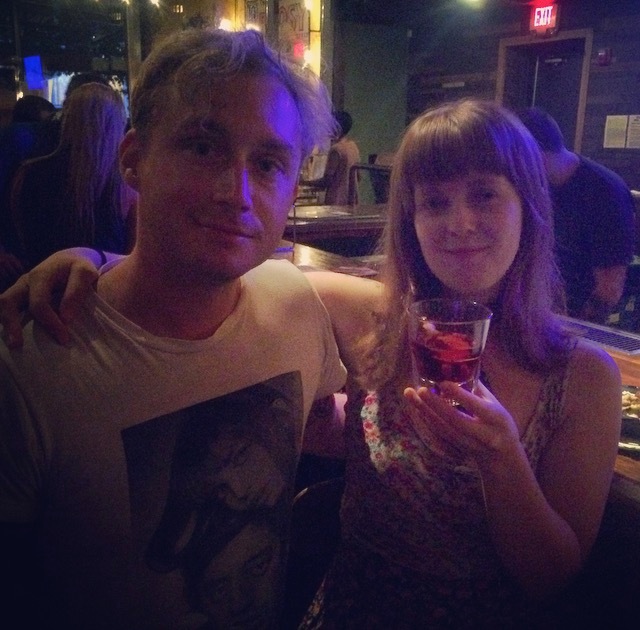 ADRONI: Philip Frobos (from left) and Adron pose with a new personalized cocktail for the summer.
Photo credit: Billy Mitchell


And with that, Adron begins our interview during a cocktail making session at Argosy. For nearly a decade, Adron has melted our hearts with her blend of tropical pop, enchanting vocals, virtuoso level whistling, and her laid-back presence. She creates a sound that she stresses is not Tropicalia, adding that “Tropicalia came from Brazil circa 1966-1969, but many things were inspired by that and I'm inspired by that.”

And while the Brazilian musical influence is strong in her songwriting, Adron draws from more recent influences as well. “I’m listening to a lot of mid-to-late '70s and early '80s R&B — what I call 'fuck jams,'” she says. "Super sexual slow jams, nasty bass lines, and bell tree, wind chimes, and trombone solos. I'm so into that!”

Opening act Fantasy Guys have become another fount of inspiration. “I really wanted to book them because last time I saw them at the Earl I wanted their set to be longer," Adron says. "I was just like, ‘Holy Shit, I want more of that!’ I also wanted to infiltrate and involve myself somehow; subtly coax them into collaborating with me.”

Sometimes dreams do come true. Between their two sets Adron and Fantasy Guys will become one on stage for three songs: Two from the Fantasy Guys canon and one top secret cover. For her set Adron will be joined by an unstoppable backing band featuring "Colin Agnew, Robby Handley, Nick Rosen, and Rick Lollar. Percussion and drums, bass, keys, and electric guitar,” she says.


It is essential to find the right cocktail to sip on while Fantasy Guys and Adron's songs fill the air on these sultry summer nights. Recently, Adron teamed up with Argosy cocktail champ Philip Frobos to concoct a reflection of her influences. See below for their “Adron,” aka an “Adroni.”

“I like Negronis," Adron says. "Cranky old people drinks. My musical vibe is often tropical and sunshine, y’know? But my vibe is old lady. This drink checks all my boxes because Negronis are kind of a nostalgic thing for me, it was my moms drink and she taught me how to make it when I was younger. ‘Honey, make me a Negroni.’ Sort of a twisted, super nostalgic memory for me. cachaça is relevant because it's Brazilian. Orange is tropical and sunshiney and my favorite color, but it's also a complex garnish to involve in a complex composition. Black vermouth is something cool and different, and I like how we are riffing on a Negroni.”