Jeffrey Bützer Brings 'A Charlie Brown Christmas' to the EARL

CL caught up with Jeffrey BÃ¼tzer to talk about his annual Christmas tribute show to Vince Guaraldi's A Charlie Brown Christmas."" 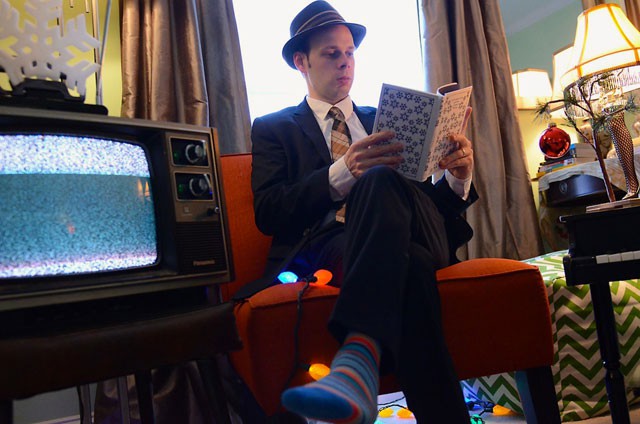 ? For A Charlie Brown Christmas, the word “timeless” is an understatement. The film turns 50 this year, which is only surprising because few things maintain such an astonishing level of popularity for so long. Honestly, few of us can remember a Christmas without it. The fact that the special — and its accompanying Vince Guaraldi-penned score — were thrown together hastily with little hope for success from all parties involved make for an even more curious case. Having been in the collective consciousness for half a century, the film maintains an almost omniscient presence over the holiday.
?
? ?? ?
? While being explicitly tied to the film, Vince Guaraldi’s score to A Charlie Brown Christmas has taken on a life of its own. Melancholy, isolation, and aversion to the commercialism of the holiday define Christmas for so many. Vince Guaraldi’s score complements those feelings in the film, but also encapsulates them on their own. Like the film as a whole, the soundtrack maintains an equal place of value in the hearts of the masses. CL caught up with Jeffrey Bützer to talk about the film, the score, and that time someone had “the worst day ever” at one of his Christmas shows.   ?

? ??? When do you remember first seeing A Charlie Brown Christmas? What is it about the film and score that resonated with you? ?
? To me, it is like Elvis, Bruce Lee, and French Fries. I don’t remember ever not knowing of it, but I didn’t really pay attention to the score until I was in my teens and started playing drums again. I learned a few songs from it to sit in my mother’s band. ?

? ?
? T.T. Mahoney and I had finished a show of interpretations of music by other artists with an eight-piece band and we were looking for something smaller and more intimate. We did not expect it to have the reaction it did. ?

? ?
? In addition to writing and performing your own music, you seem to have a penchant for doing interesting cover shows. In the last few years you’ve done tribute shows to Tom Waits, Leonard Cohen, and Elliott Smith, and you’ve been planning more. What do you like about performing and organizing cover shows? What makes you choose the artists you do? ?

? ?
? I try to avoid bands like the Pixies, Sonic Youth, and the Smiths (who are three of my favorite bands) for various reasons. I like to find artists who write great songs that lend well to being re-interpreted without losing the essence of the tune. I don’t really consider what we typically do a “tribute” show. That makes me think more of those bands that try and recreate something. For me, it is more of an excuse to play songs I love and experiment with arrangements. ?

? ?
? That said, with A Charlie Brown Christmas, we take a different approach and put more effort into maintaining the style of Guaraldi. So we kind of flip what we normally would do. ?

? ?
? This will be your eighth year doing the show at The EARL, which is more known for their rock 'n’ roll, punk, garage, and indie rock shows. Essentially, they do most things that are the “opposite” of jazz. What made you pick The EARL for these shows? ?

? ?
? I do not really know the aesthetic difference between a rock club and a jazz club? To me, the EARL feels like what I imagine a jazz venue would feel like in 1965. It has great lighting, sound. But it is not slick. Charlie Brown is all about anti-commercialism, so I think doing it in a slick concert hall would lose some of the show’s appeal from our point of view as well as from the audiences. ?

? ?
? As a jazz album, A Charlie Brown Christmas has room — and almost an expectation — for improvisation when performed live. How do you approach the performance of this album?
?
? I think that is the key. If we were playing a pop album every year, I think we would have stopped by now to be honest. We stay true to the style and form, but every night we have to watch each other for signals. There is a lot of room to move in these tunes. ?

? ?
? How have the shows evolved over the last seven years? ?

? ?
? We practice less and less for it. This year we will have played it around 50 times in the past seven years in front of people. So, we like to think we know it pretty well. We have added extra songs, various guests and singers. Occasionally I come up with one new joke I haven’t told a hundred times. ?

? ?
? You also do the show at the Strand in Marietta. How do those shows compare to the ones at the EARL? ?

? ?
? The Strand feels like a completely different show. Our families and children can come. It isn’t better or worse—just different. The theatre is beautiful and we even get our own dressing rooms! The crowds are really great. ?

? ?
? I will say, the first year we tried it, we did a 2 p.m. show and there was confusion with the promotion on it and I think some folks thought they were coming to a play or something. I have this memory forever engraved in my brain: When Chad Shivers started playing The Ventures’ Christmas Album, a group of elderly people started running for the door. An old man fell, and his grandson tried to help him up. “Just get me up and out of here!” The man was saying. “This is just the worst day ever!” But luckily, we have gotten a warmer response in the following years. ?

? ?
? What do you consider to be the three best Christmas albums of all time? I’m assuming A Charlie Brown Christmas is one of them. ?