Crack the Skye finds Mastodon on the haunt

For nearly 10 years, Brann Dailor and Brent Hinds have served as two equal but wholly opposite forces fueling the fiery dirges of Atlanta's metal behemoth, Mastodon. 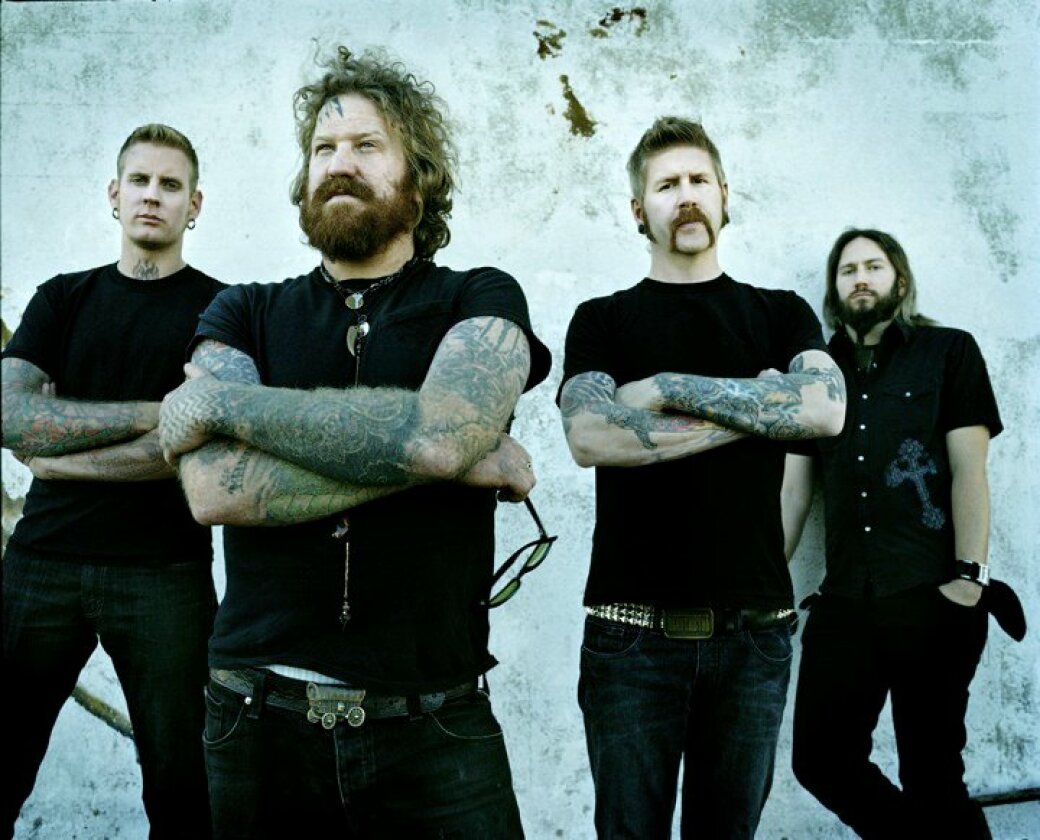 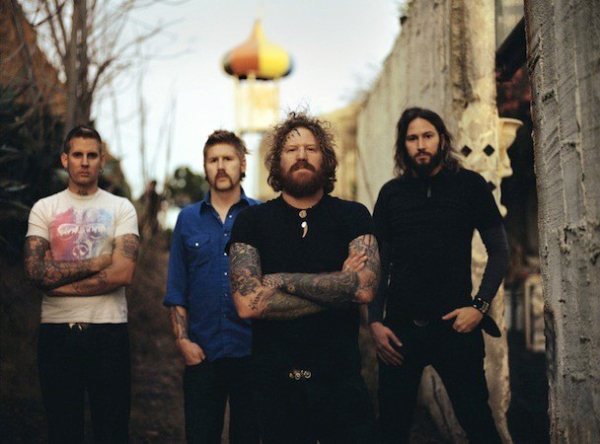 For nearly 10 years, Brann Dailor and Brent Hinds have served as two equal but wholly opposite forces fueling the fiery dirges of Atlanta's metal behemoth, Mastodon.

While Dailor's fast, complex movements as a drummer are the flipside to his reserved and somewhat aloof demeanor, Hinds is a mad dog. His bark is every bit as mean and loud as the malevolent guitar thunder he commands. Over the years, his public brawls with a music journalist and other rockers have made him the stuff of legend.

"If you ask for it, I'm down for the dealing, and I will definitely hand you the price tag!" he offers coldly.

When anchored against Dailor's precise musicianship and persona, the two function as a powerful machine whose real-life tragedies and traumas are manifested in Mastodon's fourth full-length album, Crack the Skye.

It's the first time that the group has exercised such a noticeable compositional restraint. Though the riffs and rhythms are massive, each song on the release comes together with focused melodies and slower tempos compared to the prog showiness and experimental chaos of the band's previous album, Blood Mountain. Cleaner vocals and sprawling white space sandwiched between stinging guitar assaults define the ethereal qualities of Crack the Skye. If Blood Mountain was the group's homage to earth, and previous albums Leviathan and Remission honored water and fire, respectively, Crack the Skye flies into the stratosphere and beyond.

The yin and yang of Hinds and Dailor solidifies the tension channeled into Mastodon's music via guitarist/vocalist Bill Kelliher and bassist/vocalist Troy Sanders. But when it comes to good old-fashioned character conflict, Hinds and Dailor infect each song with opposing gravitational pull. "The thing about me and Brann is that ... we see eye-to eye because of our tragedies," Hinds says. "We're the two people in the band who really have issues that we're dealing with, and they're coming out in different ways.

The album, according to Dailor, tells the story of a crippled young boy whose only means of seeing the world is by leaving his body and traveling the astral plane. Like the mythological story of Icarus, who flew too near the sun and lost his wings, the protagonist loses the golden umbilical cord that connects him to the living world during his out-of-body experience. After tumbling through space, he winds up in the spirit world and enters the body of Rasputin. Eventually, his spirit is sent hurtling back through the wormhole, returning him to the realm of the living where he discovers he is no longer crippled.

Throughout the album, these narrative elements take shape with vivid detail. In such songs as "Quintessence," "Divinations" and "The Czar," scenes unfold like chapters, with each relying on the events that take place in the preceding song — so much so that when the band tours this year in support of Crack the Skye, they plan to perform the entire album in order.

But the concept behind the release is also fed by some real-life tragedies — one of which is Dailor's attempt to come to terms with the 1990 suicide of his sister, Skye Dailor. Skye and Brann were only nine months apart in age. At the time of her death, she was 14 years old. He was 13.

"It was a teenage impulse that backfired on her," Dailor says of her decision to commit suicide using medication prescribed to their mother, who suffered from rheumatoid arthritis. "It wasn't like there was a long, drawn-out depression that finally ended in suicide. It was an impulsive act and I don't think she fully understood the repercussion of her actions. Unfortunately my mother was sick, and my sister was sick, and there were a lot of prescribed narcotics in a drawer. No one ever thought that myself or my sister would go in there and take a couple hundred of them."

While there are other factors that shape the album's conceptual angles, the loss of his sister resonates most strongly with Dailor. When he initially approached the album, he hoped to achieve some sort of catharsis over her death. But exploring his emotions has only reopened old wounds that never fully healed.

"I don't think it changes anything," he says. "It's just another way of dealing with it, but it isn't getting rid of any feelings. When a lot of people die — especially her being so young — they kind of go unnoticed. Having this ability and this platform of Mastodon, I'm able to let people know that she existed by creating this work of art and making her a part of it, which is something that can live forever."

HINDS' ERRATIC REPUTATION precedes him. For more than a decade, he's been playing guitar and singing in dozens of bands around Atlanta, including defunct post-hardcore outfit Four Hour Fogger, metal band Social Infestation (both with Sanders as well), surf/horror punk rockers Fiend Without a Face, and dozens of other local fringe acts.

There's a mousetrap tension to Hinds' personality. One moment he's a happy, jovial friend; a drinking mate sitting at the bar pounding back pints and cracking jokes. Then, at the drop of a hat, he snarls with genuine and inexplicable rage. His public brawls, including a run-in with garage-rock guru King Khan in Atlanta in 2008, have been the fodder of media ridicule, but he writes it all off as pomp and sensationalism. "I'm not a bad boy of rock and roll, I'm a warrior of rock and roll," he declares. "I'm a gigantic rock star and there's no way for me not to know that — and I love it. It's what I worked so hard for."

Shortly after 3 a.m. on Monday, Sept. 10, 2007, news began to spread that Brent Hinds had been in a fight with System of a Down's bass player, Shavo Odadjian, and another musician, William Hudson. Hinds had reportedly suffered severe head trauma after being punched in the face outside the Mandalay Bay Hotel and Casino in Las Vegas, just hours after Mastodon performed for MTV's Video Music Awards.

The attack left him in a coma for three days with a concussion, two black eyes and a broken nose. While in the coma, Hinds says, he envisioned himself traveling through space and soaring far beyond the reaches of the Milky Way.

Meanwhile, back on earth, the rest of the band was experiencing a shake-up. Just six months after the band received a Best Metal Performance Grammy nomination for "Colony of Birchmen," it was the first real incident that caused the rest of the members to wonder if there really was a future for Mastodon, and if Hinds would pull through unscathed.

"When I heard about what happened to Brent I was holding my breath and just kind of hoping and waiting for everything to be OK," admits guitarist/vocalist Kelliher. "This band is my life, and I don't know what I would do if I didn't have it. We were all wondering what was going to happen."

Hinds' scrap in Vegas blends seamlessly into the album's narrative as well. But blurring the lines between actual events and metaphorical stories is an art form when it comes to crafting a concept album. Supplying enough imagery and detail at key moments, while withholding other details to allow listeners to relate, is a decisive part of the formula. Nevertheless, Hinds insists that the album is — in large part — about what happened to him in Vegas.

"This overblown incident with this asshole that tried to end my life that night in Vegas was his demise, not mine," he says. "He tried to destroy me and all he did was amplify my mystique and make my paychecks go up about 10 percent."

While both Dailor's and Hinds' respective experiences are reflected with gripping detail in the album's concept, Crack the Skye harbors a life of its own. The songs are both nebulous and grand, intertwining with allegory and real-life tragedy. Yet, the album remains open to interpretation, depending on what each listener brings along for the headlong dive into the wormhole.

"It's not the story of my life, or Brent's life or Bill's or Troy's," says Dailor. "For me the story is kind of the chance I never had to get in there and deal with everything. With suicide you experience a lot of guilt. You feel like you could have done this or that to help, and that you should have been there. So I'm maybe rewriting history with it a bit, in a way that I was able to go to the abyss and save her, go out into oblivion and bring her back."