…and lives to tell about it! 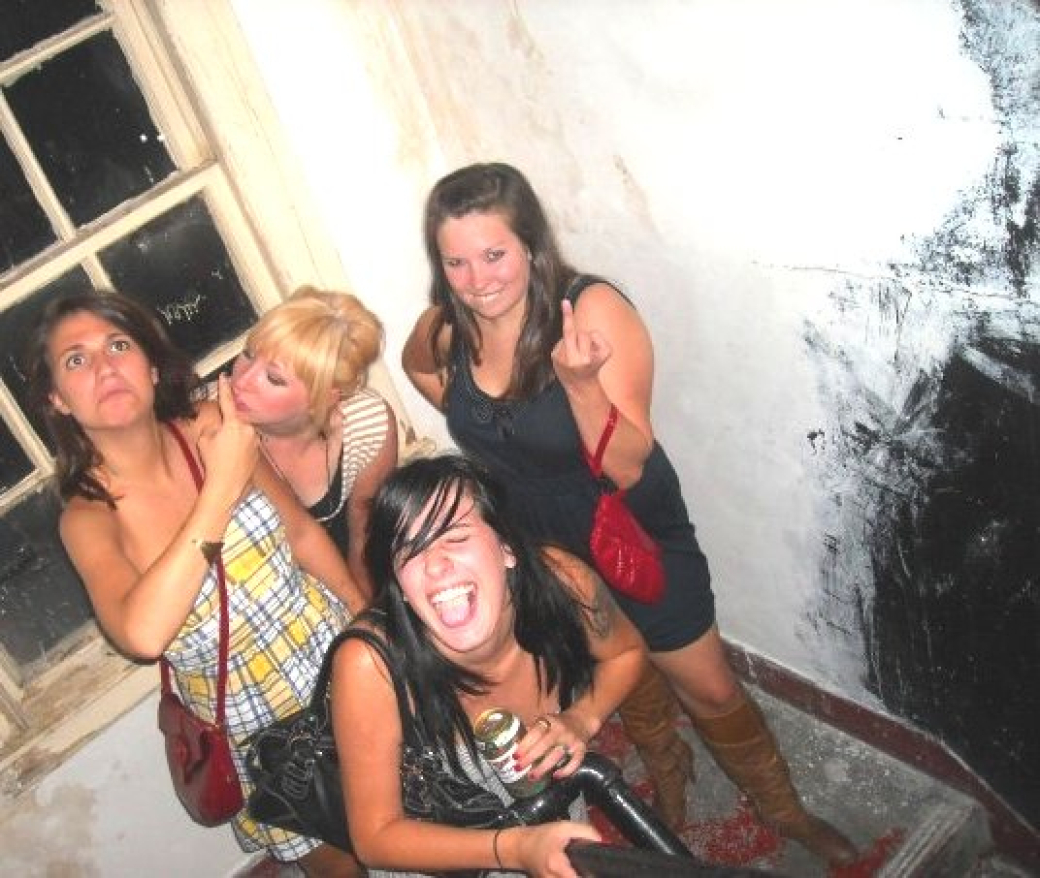 ALL GOOD THINGS MUST-

It opens old wounds, bad ideas, troubled times, nasty sex, sweaty drugs, new starts, and almost always, a shady hiding place. As a rusty key opens the door to one of our rooms in the Clermont Motor Hotel, we're hit in the face with the firm smell of gentleman's musk. Fourth floor or not, this is the ball sack of the building. And we must be nuts for doing this.-

It's a triangulation of sin. A dangerous, if not deceitful, triangle along the Poncey corridor that connects the Crack Track (the much ballyhooed Beltline) to the Murder Kroger, MJQ, and of course the Clermont Hotel. Sunup or sundown, that block on Ponce de Leon Avenue has played host to hilarious, harrowing tales for most of us. And the Ford Factory Lofts water tower stands proud and useless overlooking all of the questionable decisions and mishaps that take place below.-

MJQ gives us a headquarters. Green's gives us courage. And the Clermont, well, I'm not so sure anymore. If anything, maybe the Clermont gives us a reminder to get our shit together. That, and maybe hepatitis. Pick a consonant.

It's exactly as I expected. Maybe not as comical as two wise-cracking cartoon rats smoking cigarettes and playing dominoes, but it's certainly not short on folly. The lobby is in a sad state — like a foyer to a funeral home. On the floor, cold, white tiles turned an earth-tone beige greet you. And the snack machine humming in the corner is the most modern piece of technology in the building.

The elderly black woman behind the bulletproof reception window — bless her heart, she obviously doesn't get much practice at this place — is about as slow as the police response on a Saturday night. She probably doesn't know what day it is, much less remember the procedure to check someone into this hole. And it doesn't help much when members of my Team Dangerous Sleepover crew are asking such questions as, "Is there a convict rate?"

A half hour of melted bags of ice and confusion later, I take a seat on the tattered couch only to sink down a good foot and a half. Ah, the Clermont and all its creature comforts. The bell on the door rings and in limps a real life Clermont creature. We passed this unfortunate relic on Ponce over an hour ago going in opposite directions — literally and figuratively. He's a building resident who has presumably gone out for his nightly essentials. I would say the brown Green's bag was clinking, but his brands come in an inaudible form. Plastic, for this savvy shopper. Quantity over quality.

It's 11 p.m. and its shift change. A tall, slender and mustached fellow in his early forties relieves the receptionist. Seventy-five bucks for a couple of double rooms — one being a suite — and we're off. Through a locked slide door and down a back hallway, the Foxworthy mustache leads us to the elevator. It's manually operated, just like in all the old movies. Slide the gate open and lock yourself in. The control box takes you up and the operator takes it back down.

He points us to our quarters and while caging himself back in the elevator, he offers last-second advice. "Don't forget to let the water run a few minutes before it turns clear," peering over his early '90s square-framed glasses, he adds, "And call me if you need anything."

Fuck that. I'm calling the CDC. Or my mom.

The key hits the door, and a roach with a great sense of timing scurries by my hand. It must be a sucker for clichés. I smirk and look to my right. Grinning ear to ear, arms to palms full of bottles that clink, Slay commences, "Let's party, motherfucker."


IF THESE WALLS COULD WALK—


In a fit of good housekeeping, Slay immediately slings the comforters off both the double beds and into the corner. I'm just not sure how much more comfortable or sanitary the bare sheets will be. At this point, it may not matter Unless our pajamas are made of Hazmat suits, we're just arguing over semantics.

The walls. Brown. The '70s wood paneling. Brown. The water. Brown. The roaches. A slightly darker hue of brown. All we can ask for is consistency, and the Clermont is all over it.

The kitchenette is quaint. Can't help but think of all the wonderful meals prepared by loving hands in here. And possibly meth. Or homemade ecstacy. And if freebasing is considered cooking (and by all accounts, I do consider it), then this little nook is a full-blown gourmet, top chef's heaven.

There's a television, but no cable. They haven't had cable in years. There's a window with maybe two dozen coats of paint on it. It barely opens enough to fit a shitty 19'' television through it — or a dead hooker. Next to it chugs an air conditioning unit that's, without a doubt, the hardest working thing in the building — excluding maybe a couple of bartenders downstairs.

While having cocktails and odd conversation with Team Dangerous Sleepover members, I start to notice charming characteristics about the room. Little things like a winsome spat of blood here or there, or the engaging burnt outline of an iron on the carpet. It really does tie the room together. But honestly, who needs to iron their clothes while flopping here? I'd like to be at that job interview. What a great headline that would make in the AJC, "Historic Clermont Burns to the Ground. Fuck Up with Shitty Job Interview Leaves Iron On."

The brown water running through this place might actually prove more flammable.

If these walls could talk, they'd surely tell some dastardly tales. But what if these walls could walk? Would they raise up and head for more promise? It seems everything in and about this place is content with losing. The fight is over for this trophy club of underdogs, and that's the saddest thing of all.

Slay notices there's a missing bottom piece to the mirror, triangular and shank-sized. "Fuck these walls", he proclaims, "That piece of mirror has the fucking story to tell."

IT'S NOT SO MUCH THE HEAT…

Well after midnight, our crew of charlatans treks down the stairwell to the Lounge in hopes of gathering some willing and barely able late night hall crawlers. I'll spare you the sordid details — If you've been to the Clermont Lounge on a Saturday, it's the same story. The door swings open and the body heat smacks you in the face. It's not heat from the dancers, it's sweaty aroma from the OTP guys who traveled in for the irony, or from the gals in the bachelorette party conga line, dancing to weirdo Romeo Colonge's set list which hasn't changed in 15 years.

I don't mean to come off as blasé about the Clermont Lounge. I absolutely love it and everything it represents. It is a creepy jewel in the crown of Atlanta. It says a lot when a place can remain the same for some 30 odd years and it still be successful. But a Saturday night there is a different animal than say a Tuesday with the regular misfits and miscreants.

Dripping in sweat and libations, Slay and our crew stay on the move. He's nearly bags an entire bachelorette party for later tonight, until the girls realize this is the hotel he's been talking up. The Clermont is a five-story cock blocker. And it's probably for the best. If I found out my tomato-to-be was out getting loose at the Clermont Motor Hotel, I would say that's grounds for an annulment. Bless her heart.

It's lightning round outside as the club empties. But I'm more interested in the silhouette in a second floor window. It looks like a dude leaning against the window seal. One of his arms is visually accounted for and I'm pretty sure I know where the other one is. In mixed company, I think the best way to put it is his arm is Chris Brown and his, uh, lap is Rihanna. I'm not sure what time he's keeping, but he's got a pretty good beat going.

As hotel parties go, nothing much to shout about here. Of course, given our location, it does add nuance. Oddly, the place frowns upon visitors. The Clermont makes the company of guests leave identification and pay a $10 cover. That's right, visitors have to pay a $10 cover to come inside the hotel. Most would probably pay another $20 to get out.

Foxworthy Mustache is working the graveyard shift, and luckily he gets the joke. He lets the creepy hall crawlers we've assembled slide, and off we go stumbling up a musky stairwell. It's a haze of a party. Cigarette smoke and sweat mix with randomamia like watching girls pee because the bathroom door doesn't close all the way. Or a guy sporting a button-down shirt with a dragon swooshing from the back up to the front. And it's a pretty serious dragon. Even Foxworthy Mustache pops by to check on us and partakes a sample of our goods from Green's.

Daylight nears as things wind down. I find my way down the stairs and out onto Ponce for fresh air and a stroll. Team Dangerous member Geno Marino and I make our way to the Majestic to collect our thoughts over greasy spoons.

Maybe the fight is over for the Clermont Hotel. The place is spiritual and profane, but it's also useless. There isn't much magic going onside the 20 percent of the building that actually functions. And the ghost of G.G. Allin isn't exactly as romantic as say a Charles Bukowski.

It would be poetic if the Clermont Lounge remained untouched, just as it has for all these years. But change on Ponce de Leon Ave. may not be as tragic as it sounds.

When morning comes, my mouth tastes like I ate an ashtray out of Blondie's ass. It's 10 am and I'm awakened by Slay screaming at me. The sheets have come undone and my skin is in actual contact with the bare mattress. He reasons I probably don't have long to live. So it goes. All bad things come to an end.