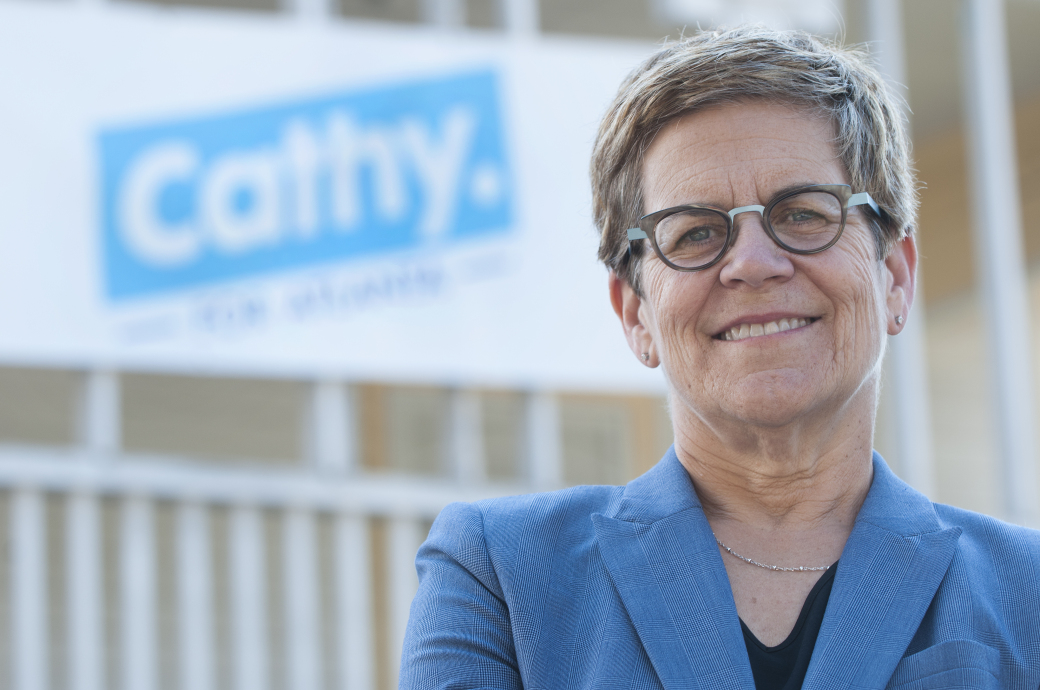 Editor’s note: As the race for Atlanta’s next mayor heats up, Creative Loafing will be sitting down with every major contender in an effort to replicate that awkward knock on the door from candidates and canvassers. Visit creativloafing.com for weekly updates on the impending election.

You might know Cathy Woolard as the first openly gay elected official in Georgia, but she’ll have you know, she’s a helluva lot more than that. She championed the Atlanta Beltline project, helping turn Ryan Gravel’s transit trail plan into concrete reality; she pushed comprehensive civil rights legislation to ratification; she served in the Peace Corps, addressing issues of poverty in struggling nations; and, in Atlanta’s ridiculously crowded race, she’s vying to be your mayor.

“The intersection of social justice and infrastructure and transit is what I’ve spent my entire life working on,” she told Creative Loafing in a recent interview. “We’re in this crossroad in Atlanta where that’s the skill set the next mayor should have.”

If that’s the mayoral job description, Woolard’s got the chops for the gig, and her support from the city’s progressive voters should carry some weight come polling time. But as far as current polls go, she’s got some catching up to do. Sitting at fifth place in Landmark Communications’ recent poll, with almost 7 percent of the votes, she knows her clout with the liberal community won’t tip the scales this election season — Atlanta’s pretty darn leftist, as are most other mayoral contenders. Still, she says Atlanta’s next mayor can’t sit idle while the antithesis of progressivism, President Donald Trump, rules the nation.

CL sat down with Woolard the same day Trump announced his ban on transgender soldiers in the military. Her father was in the Air Force, and for her, such issues are personal. Woolard says Trump was “irresponsible” to dish out such an impactful order via tweet and without proper vetting from the Joint Chiefs of Staff, adding that Atlanta’s next leader needs to act as a buffer between Washington leadership and the City.

“I think the mayor has a strong role to play in national and state politics,” she says. “Some of those roles require being upfront: Either raising the alarm about an issue or responding to issue, and sometimes it’s working behind the scenes to advance or oppose an issue.”

Recently, the national political climate has begged citizens for their take on Civil War relics. One mayoral candidate has called for the takedown of them all, and the current mayor created a taskforce to tackle the quandry. Woolard says she sees more importance in protecting Atlanta’s architecture that memorializes the civil rights movement. Plus, swapping out potentially racist street signs, she said, is easier said than done: “When you change a street name, you are impacting residents and businesses in a way that costs real money, and so we have to compensate people when we do that.”

In years prior, says Woolard, name changes have yielded unforeseen consequences to business owners who might not have weighed in on the issue. “We did not take the appropriate care to compensate business owners who had to change stationary or the paint on their truck.”

Still, Stone Mountain’s rock carvings of confederate effigies don’t sit well with Woolard. “It’s very hard for me to go to Stone Mountain Park,” she said. “There are just so many things that are offensive about it.” However, during a conversation with Beltline visionary Ryan Gravel, she said, she identified a viable future for the massive monument: Camouflage. “Gravel’s idea was to blast it with seed so that it actually grows green. The carvings are so large that you could grow trees on them. Then, just don’t clean it; just let nature grow over it. I thought was a brilliant idea.”

But, the “true tragedy” in Atlanta, says Woolard, is the uninhibited dilapidation and destruction of “legacy buildings” that pay homage to the civil rights era. “We’re letting our civil rights legacy crumble in the city,” she says. “The Georgia Dome is right on top of Martin Luther King Drive, which was a historic route from historically black colleges to the Capitol during the civil rights movement. Paschal’s Hotel is falling in. It’s in very bad condition. That civil rights legacy is so key to our identity as a city.”

She wants to inventory these historic buildings, save them, and “create a living civil rights trail that preserves the history of our city right now.” According to Woolard, that won’t require policy changes. “It just needs money and attention. Some historic properties we can buy. Some things we can put on the historic registry, but somebody’s still gotta renovate them.” Otherwise, she says, they’ll be lost.

Protecting Atlanta’s history book-worthy past, however, is a small fraction of her platform. The city, she tells us, also needs to gear up for the massive population boom awaited in the next few decades. To prep for the hundreds of thousands of new Atlantans expected to plop down in coming years, Woolard’s whipped up a transit plan to keep people moving. “We really don’t have any time to debate whether this is a good idea,” she says. “We’ve been standing around for 30 years. Now it’s time to go.”

“I’d like to put five transit lines down simultaneously, so that in the next eight or 10 years, we actually have transit out of traffic in corridors around the city and across town, so people can choose to live on corridors that have an array of housing choices and get to work and home again.”

Plus, she wrote in Atlanta Business Chronicle, “a fully built-out streetcar system with connections enhanced by more local bus, sidewalk and bike facilities is our next step to continued greatness.”

And affordable housing opportunities — initiatives overlooked by Beltline leaders during the Great Recession — need to be a top priority when getting the project back on track.

Woolard stepped down from her City Hall post in 2004 to run for Congress — a bid she hoped would woo more transportation funding toward Georgia coffers — but she lost to Cynthia McKinney. Now she hopes to steer Beltline planners back toward the initial project plans, and possibly even find ways to retroactively fit the now-gentrified Eastside Trail with more affordable dwelling options.

The Eastside Trail won’t always be the congested tourist trap it’s become, Woolard said. Ideally, when the 22-mile pathway is complete, the shoobies shopping around will have ample access points and won’t be swooning over too many Ponce City Market-esque mixed-use complexes that are worrying low-income neighborhoods along the slated path. “We have proved the concept,” she said, speaking to skeptics who doubted the trail’s potential to catalyze nearby development. But she said she understands plenty of people are fretting about jacked-up property values — and taxes — that accompany that growth.

Many of those concerns stems from deep-pocketed investors buying up swathes of cheap property on the Beltline trails to-come. “We have to increase property taxes for people who are not putting things into use, because it costs the city money,” said Woolard. But effecting these proposals requires more than a call from politicos. City Hall, Woolard said, needs to be more receptive to public input. “It’s less accessible to the common person,” she said. “Even just feeling like your voice matters. I’ve heard lots of complaints from people who’ve said that the NPU system doesn’t matter anymore.”

So, like candidate Vincent Fort, who preaches that “City Hall has lost its way,” Woolard hopes to fix things. For starters, she said, Atlanta’s next mayor won’t be an aggressor, as Reed has been during this race.

“It diminishes our city when the leader acts like Donald Trump and sends tweets and Facebook posts, and now press releases that get posted on the city’s official website, excoriating people in a personal way,” she said. “I’ve been attacked, John Eaves’s been attacked, Ceasar Mitchell’s been attacked.”

Luckily, she said, Reed’s ramblings likely won’t have an impact on this contest’s outcome. While his legacy is bogged down by the federal probe of Atlanta’s corruption scandal, Woolard’s looking toward the future.