The tragedy and triumph of Glenn Phillips' 'Lost at Sea' 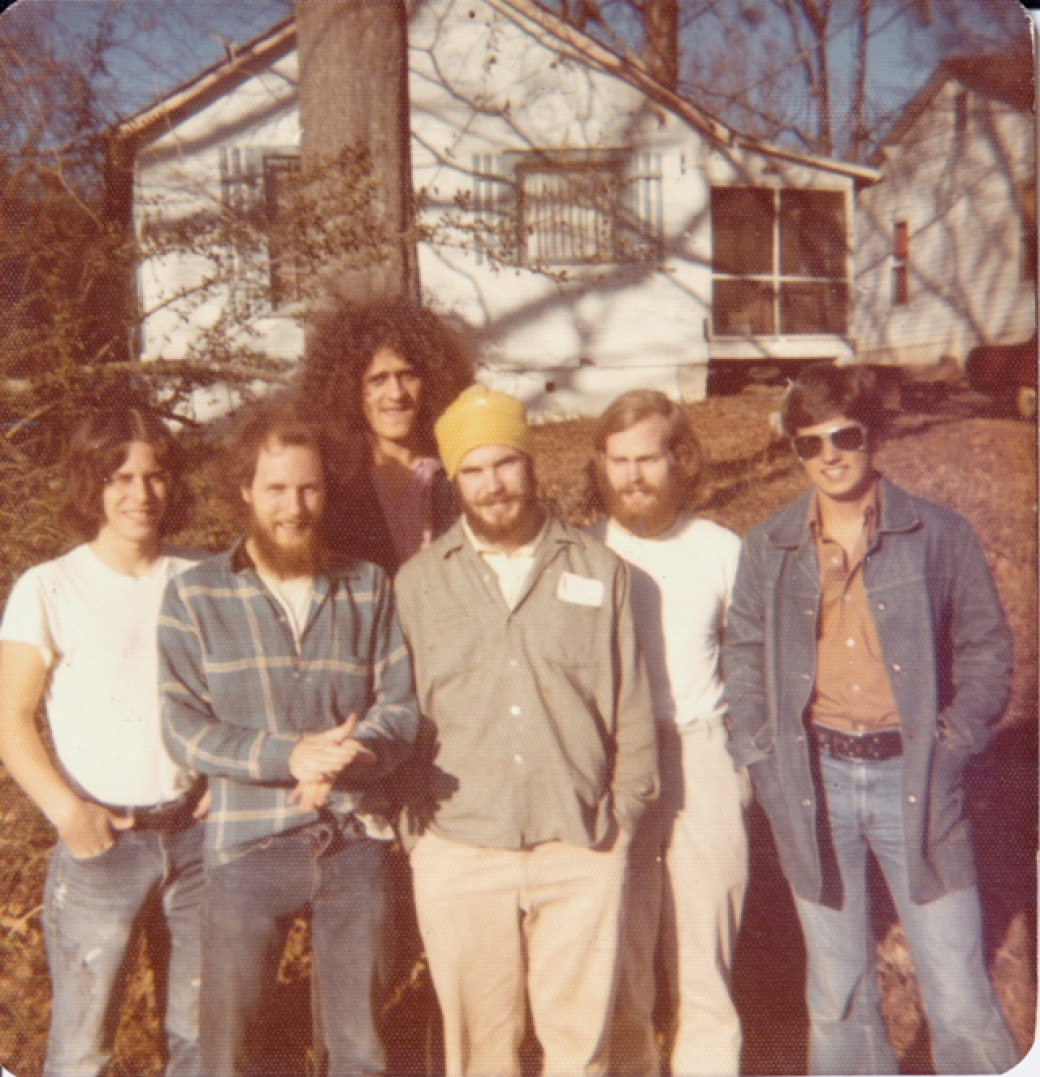 Photo credit: SEA CHANGE: Glenn Phillips (second from left) with the original Lost as Sea band across the street from the duplex where the album was recorded.
Lenore Thompson
By Chad Radford Wednesday May 27, 2015 04:00 am EDT

May of 1973 was a dark time for Glenn Phillips. The guitarist and co-founder of Atlanta's late '60s and early '70s art-rock trailblazers the Hampton Grease Band was set adrift when the group broke up. His spin-off project, the Stump Brothers, was about to call it quits, too. Then, tragedy struck.

Phillips' relationship with his father, Charles, wasn't ideal. Against his father's wishes, Phillips pursued life as a musician rather than go to college and secure a more traditional career. As a result the two were estranged from one another. Then one night in May, his father paid a visit to the Brookhaven duplex where he lived. Phillips was braced for criticism, but before leaving his father said, "You've really got it made. You're doing exactly what you want, don't ever give this up."

The two made peace. But just a few hours later, his father committed suicide. "That was the most traumatic experience of my life," Phillips says, looking back on the night that unfolded more than 40 years ago. "It was his 50th birthday, he knew he was going to do it. I didn't. He made our last moment together something important. Being a musician, my way of dealing with it was to do something musically — turn it into something positive."

Phillips immersed himself in a whirlwind of songwriting. A mysterious and beguiling batch of instrumental rock songs began taking shape. Songs with titles such as "I've Got a Bullet With Your Name on It," "I Feel Better Already," and "Lenore" revealed an abstract narrative driven by confusion, vulnerability, and a sense of triumph. Phillips' ecstatic and expressive guitar playing took on a lyrical role channeling the murk and mire of his fragile emotional state.

It's a confusing sound, one in which not everything is clearly heard. He called the album Lost at Sea. And when the needle sinks into the record's deep black grooves, the lo-fi din of "I've Got a Bullet With Your Name on It" resonates with the subconscious on the same level as classic albums such as the Beach Boys' Pet Sounds and Joy Division's Unknown Pleasures — somewhere between devastation and catharsis.

As powerful as these songs are, giving the music a proper release was as trying as the story behind the music's origins. Following the Hampton Grease Band's demise, Phillips befriended singer and guitarist Lowell George of Southern country and R&B rockers Little Feat.

George, impressed by a demo recording of Phillips' songs, took a tape to Warner Bros. and offered to produce it. The label was interested. But when Columbia Records had dropped the Hampton Grease Band, Frank Zappa signed the group to his Bizarre/Straight label, which included a management deal with Herb Cohen that still lingered. Cohen was embroiled in a lawsuit with Warner Bros. and, out of spite, told the label if they wanted to release Phillips' record it would cost $100,000.

Warner Bros. wasn't about to hand over that much cash. But the urge to release the music was so great that Phillips took matters into his own hands.

It was decades before the DIY movement was the order of the day in the wake of punk and indie rock. "I started calling around to figure out where to get records mastered and pressed," he says. "The information was there."

Phillips had already assembled a solid cast of musicians to play the songs, including Jimmy Presmanes (drums), Bill Rea (acoustic guitar), John Carr Harriman (cello), Mike Holbrook, and Martin Hoke (piano, vibes, marimba). About two years after his father's death, he filled the two-room duplex where he lived with his girlfriend, Lenore Thompson, with borrowed equipment and recorded Lost at Sea. "There were wires everywhere," Thompson says. "Amps in the bathtub. Keyboards in the living room. They would play and record live. I was knob jockey, but Glenn and Bill were the 'ears,' and I would set knobs to their specifications."

With the music recorded, the work was only partially complete. "There was a mastering place Downtown, so I strapped the tape to my bike and rode all the way from Brookhaven, with my dog," Phillips says.

To handle the release, Phillips created his own imprint, Snowstar Records. But running an independent label was uncharted territory for the music industry. Operating without distribution meant selling records out of his home and at gigs. Ultimately, the album fell into obscurity in the States.

No one is entirely sure how it happened, but a copy of Lost at Sea made its way overseas and landed in the hands of famed U.K. DJ John Peel. Peel began playing the songs. As fate would have it, the songs eventually caught the ear of Richard Branson, and soon Phillips signed to Virgin Records.

Upon release, Lost at Sea was a critically acclaimed album in the U.K. Later, the group was flown over for a tour with Steve Hillage. "I love wild guitar playing and there were similarities in Glenn's playing to John Cipollina, Mike Bloomfield, and some of the guys who played with Captain Beefheart, so it was love on first hearing," says Nigel Cross.

Cross is the founding editor of Bucketfull of Brains magazine, and runs the London-based label Shagrat Records, which in April co-released a 40th anniversary reissue of Lost at Sea with the Florence, Mass.-based Feeding Tube Records.

Pressed in an edition of 500 copies, the album is bulked up with the addition of a second LP including pre- and post-Lost at Sea demos along with unreleased and live material. "I remember playing the demos on the first side of the bonus LP for Richard Branson," Phillips says. "I remember he drove up in this muscle car — have you ever seen Smokey and the Bandit?" He drove up in that car. Lenore said, 'What are you doing in a redneck muscle car?' And he said, 'It's the American thing to do, isn't it, love?'"

For the reissue, the album's proto-DIY aesthetic is faithfully preserved, with a few additions. "I didn't want to tinker with the original LP and sleeve at all, but when Glenn sent me those extra tracks, there was enough for a great bonus disc so we had to expand it," Cross says.

Tony Poole, who mastered the bonus LP and did the artwork, sourced the original typeface and did the additional layout for the gatefold design. "We also had some more illustrations from Kenneth Smith, whose crazy creatures gave the original release a lot of mystique," Cross says. "I asked Glenn to write some notes about the additional tracks and I had to ask Phil McMullen of the Ptolemaic Terrascope magazine to write an overview, as he is one of a very few U.K. journos who has kept the flame burning for Glenn in the years since Virgin."

To celebrate the album's reissue, most of the original lineup for the Lost at Sea band (all but Martin Hoke, now a former Republican representative from Ohio) reunites on Sat., May 30, at Red Clay Music Foundry in Duluth. The group will play the album in its entirety, along with Phillips' second record, 1977's Swim in the Wind.

Forty years later, the darkness has lifted. But the songs that Phillips wrote while reconciling his father's suicide still bear weight. "All my music has been a memoir," Phillips says. "You take who you are, try to find some truth in yourself and the music, and learn things about yourself. When you're a kid growing up, you're self-absorbed. You take what's happening around you as a reflection of something about you. It isn't until you get much older that you realize it wasn't about me. Music helped me figure these things out — that's not saying I have it all figured out."