Atlanta gets its write on

Behind the rise of the city's new DIY literary scene 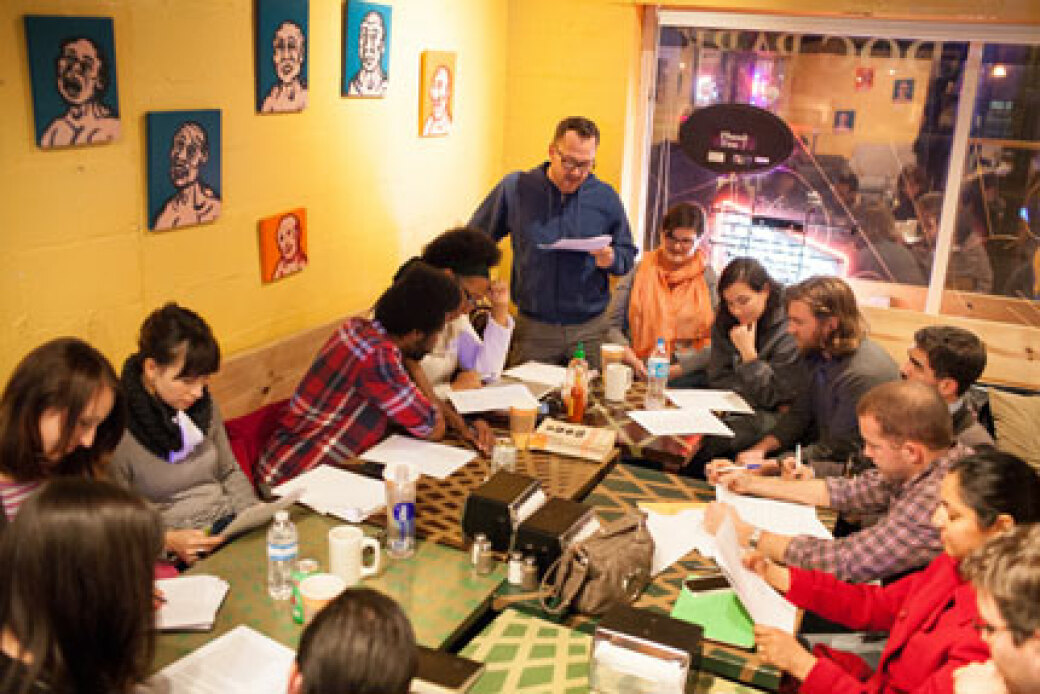 It looks like your average Friday night in the Old Fourth Ward. In the Music Room, an underground club on Edgewood Avenue, a packed crowd stands at attention, PBR tall boys in hand, as drag queen Lavonia Elberton, a ghoulish Southern vision in gingham and stark white face paint, takes the stage.

Appearances aside, this isn't some lavish indie rock production. The host introduces Jayne O'Connor, who proceeds to spin an incisive account of image-obsessed teen girls and that patron she-devil of slumber parties, Bloody Mary. The crowd's respectful silence gives way to guffaws, which escalate into shrieks of laughter a few minutes later as Julian Modugno recounts the hilarious and twisted fable of a pair of teens with hooks for appendages whose hormone-heavy make-out session is terrorized by a bogeyman with actual human hands.

This bawdy and irreverent evening called "Urban Legends" was staged by O'Connor's zine Hyde ATL, and is part of a rising wave of informal Atlanta literary events offering an antidote to the reading event as a staid, whisper-quiet gathering, or "Something dull, attended by fops," as Write Club's Myke Johns puts it.

A DIY spirit has possessed Atlanta's writers and readers, who are taking literature out of the stuffy confines of the library and into coffeehouses, bars, galleries, and event spaces. The effect is decidedly egalitarian: Series like Solar Anus and Lost in the Letters spotlight under-the-radar talents, while groups like Kill Your Darlings ATL and Eyedrum's Writers Exchange provide forums for authors to workshop their material with other writers. Write Club Atlanta's head-to-head matchups and loud music stir up a literary whirlwind somewhere between "WrestleMania" and a rock concert; Hyde ATL produces brash and brainy romps; and Vouched Atlanta, an online champion of small-press literature, sets up guerilla bookstores at area events and stages its own readings. There's also Carapace, True Story, and Stories on the Square, which place less emphasis on reading, but share audiences and performers with their storytelling brethren.

"There's a commonality in that it's all about the story," says Daren Wang, executive director of the Decatur Book Festival, publisher of the audio literary magazine Verb, and producer of two radio programs about writing.

That common ground extends to the audiences, which seem hungry to listen to and interact with writers up close.

"These are the warmest crowds I've ever performed for," says Jason Mallory, a writer, podcaster, and stand-up comic who has participated in True Story and Write Club. "They're ready to hear good writing. They want to hear what you have to say. You could not ask for a better audience than a roomful of people who are already predisposed to listen to you."

Atlanta and literature are hardly strange bedfellows; the city was the home to Margaret Mitchell, Joel Chandler Harris, James Dickey, and Lewis Grizzard, and, more recently, of Salman Rushdie's archive at Emory University, where the author became a Distinguished Writer in Residence in 2007, as well as recently crowned 2012-13 U.S. Poet Laureate Natasha Trethewey

And no discussion of this bookish landscape can ignore the Decatur Book Festival, which has played a significant role in raising Atlanta's literary profile over the last seven years through its Labor Day weekend extravaganza, literary events, and support for educational programs.

"The Decatur Book Festival has done a great deal to transform the metro area's literary scene," says Kate Sweeney, host of True Story. "The number of writers who take part in True Story who turn out to have just moved to Decatur in the last five years is just silly."

The festival, along with other ventures like SCAD Atlanta's writing program, has helped attract new writers to the city. Still, as recently as four years ago, area storytellers were experiencing a distinct lack of showcases for their work, especially in comparison to the city's vibrant poetry scene, which boasts such names as Collin Kelley and Kodac Harrison, and a rich history of slam poetry.

"There weren't these kinds of events going on in Atlanta," says Jamie Iredell, who co-founded Solar Anus with Amy McDaniel and Blake Butler in 2008. "Atlanta was really not a literary city for a city of its size."

"When we started, we knew of no other outlets, outside of series run by universities, for visiting indie writers to read their work aloud and sell their books," says McDaniel. "So we changed that."

Sweeney, who enjoyed a "tight literature community" while attending the University of North Carolina at Wilmington, felt that same lack when she moved back to Atlanta in early 2009, leading her to start True Story with Dionne Irving in October of that year.

Things snowballed after that. In February 2010, Randy Osborne and Joyce Mitchell started MothUP Atlanta, an affiliate of the New York-based Moth storytelling organization (it later shed that affiliation and became Carapace). Kill Your Darlings ATL cranked up in June, acting as an online community for writers and a hub of information about literary events. Eyedrum kicked off its Writers Exchange forum in July. A year later, Vouched Atlanta and Write Club Atlanta debuted in July 2011.

"When the time is right for certain discoveries to be made," says Osborne, "you'll find them taking place almost simultaneously in widely spaced locations."

If the emergence of Solar Anus, True Story, and Carapace marked the birth of a new, self-sufficient literary movement, the arrival of Write Club Atlanta can be seen as the moment that infant began to walk, talk, and discover the joys of throwing its toys on the floor. Johns recalls that first show with the fondness of a parent who has just bronzed baby's first shoes.

"It was awesome," he says, "like we'd been given this gift of a show that people already loved. The room was pretty full that first night, and they were into it and the power nearly went out and the whole affair was like an underground punk gig."

Traces of that punk-rock spirit can be seen in every corner of Atlanta's new literary terrain, from the DIY ethos of Solar Anus and Vouched to the unabashed bawdiness of Hyde ATL, and the inclusive atmosphere of Carapace and Stories on the Square, where everyone is invited to participate.

And more events are popping up all the time. Lost in the Letters debuted in September, and the writer's group 10 Days Before... held its first event on Nov. 9.

"Apart from the shows themselves, there is some sort of vibe around them that I think people have picked up on," says Johns. "The recognition that something is happening."

So why now? There are as many different theories for that as there are stories waiting to be told.

"I think there was a ripeness or readiness," Osborne says. "I'd say that people, almost all at once, have rebelled inwardly at our separation from each other, at our bovine willingness to sit, night after night, in front of computer screens."

"This is a commuter city that's been trying to grow a coherent center forever," says Write Club's Nick Tecosky. "Atlanta's naturally going to cultivate a stronger arts scene as it grows."

Whatever the answer, "I'm really happy to see a lot of literature events in the city," says Lost in the Letters' Scott Daughtridge. "I'd love to see a reading event coming out every night of the week."