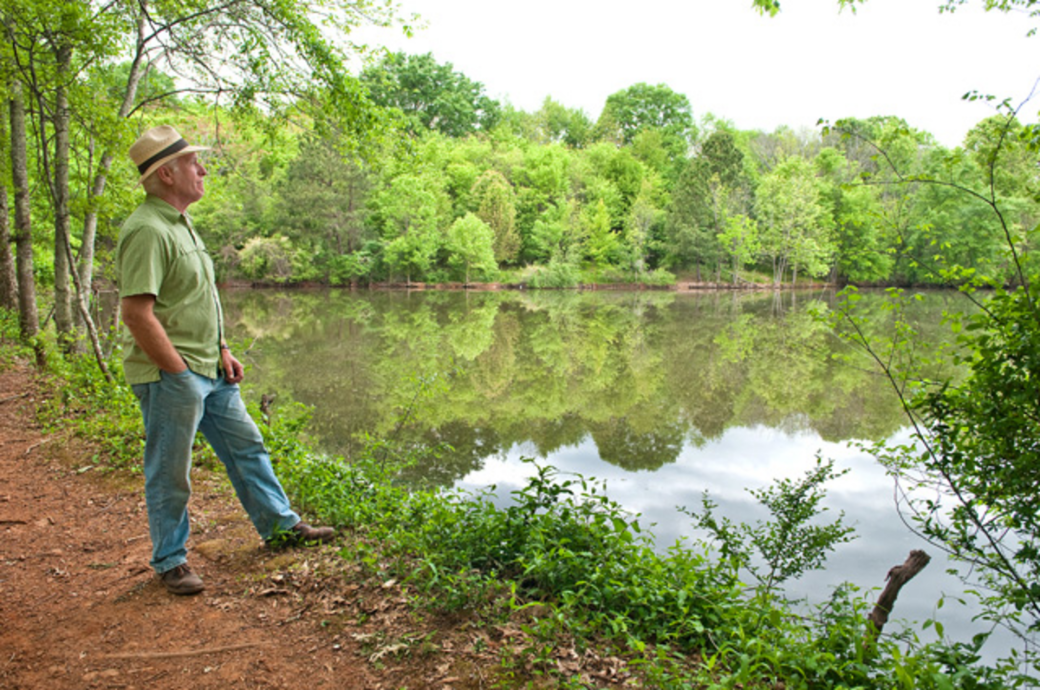 For decades, the old prison farm in South DeKalb County has accumulated what's unwanted. Miscreants were shipped there in the last century. Now amid the farm ruins, there's garbage of all descriptions, the façade of Downtown's long-ago demolished Carnegie Library, and allegedly at least one zoo elephant grave. But Scott Petersen and a group of true believers see a park.

This year — with DeKalb voters electing a new county CEO, visitors spreading the word, and adding art — they're looking for it to be a good one for the cause. But then, they've been hoping that for years.

Petersen estimates that over the last year and a half or so, he's led some 1,400 people on tours of the abandoned Atlanta Prison Farm site near the Starlight Six Drive-In. The guided walks are "tours" inasmuch as he leads people around the grounds of the 300-acre greenspace. Technically, it's "trespassing."

Doing away with that restricted access and making the place a public park would be a "prime example of economic and environmental justice together," as Petersen put it. Petersen, a retired nurse who leads an ad hoc group called Save the Old Atlanta Prison Farm and has been working on the issue since the 1990s, says some of the decrepit buildings on the site are so toxic with foul materials such as asbestos that he won't bring visitors to them.

Though located in unincorporated South DeKalb between Key Road and Constitution Road, the property is owned by the City of Atlanta, which for years shuttled offenders to tend fields and pay their debt to society. But the prison has long since closed, and for years neither the landlord nor the county has done much that would disturb the deer that live amid the ruins now. More recently it's been the location for some film shoots. Other than trespassing visitors and Petersen's quiet tours, the land sits officially idle.

Petersen compares the envisioned park's potential to Chastain Park in North Atlanta: big enough for locals to play but also attract visitors who would give a boost to nearby businesses. A prison farm park would also be massive; at 300 acres, the greenspace would be about the size of Bellwood Quarry.

Longtime farm activist Joe Peery says it's time to subvert the political a little and activate art in the service of the park. He's taking a cue from both the Doll's Head trail, a guerilla art walk in nearby Constitution Lakes Preserve that features makeshift art pieces and, naturally, dolls' heads. He also is looking to Art on the Beltline for inspiration. Both the greenspace and program entice people to explore.

To start, the illustrator and animator is planning a day for people to set up easels and canvases and paint. Petersen and other volunteers are making it political, too. They don't consider outgoing DeKalb CEO Lee May an ally, as Petersen and the group's Facebook posts make clear. At the top of the Facebook page is a call to action alongside phone numbers for Atlanta Mayor Kasim Reed's office and DeKalb County commissioners.

"I think if we make this an issue in the CEO race, this area will really gain something," Petersen says. He says about 1,800 fliers have already been handed out urging area residents to make this an issue, and he plans to publicize it more.

Larry Johnson, the county commissioner whose district includes the prison farm, says he would like to see some sort of family-oriented site there — a park, a dog park, a playground, picnic areas, passive areas, maybe an amphitheater.

But "I can't just say 'I want this.' Because they Atlanta still own the property," Johnson says. "I don't know what the total cost is ... we'd first have to start with Atlanta and what they would like to do."

The land's fate depends on whether officials can agree a deal is worth pursuing. There have been reports in the past of Atlanta talking about possibly selling the land to DeKalb. The last time CL reported on the logjam, in 2014, the word from City Hall was that talks on a land swap might get underway. The word from a spokesperson for Reed today?

"No updates at this time."