Kevin Gillespie's mosaic of Southern cooking influences can be traced back to the food both of his grandmothers cooked when he was a kid. His mother's mother, Coylene Higgins, was old Atlanta and cooked, in Gillespie's words, "high society indulgent food prepared with ingredients only the rich had access to like cream, butter, and flour." His father's mother, Geneva Gillespie, was from the mountains and prepared Appalachian "country cooking," where no ingredient is spared.

Higgins, who encouraged Gillespie to become a chef, also instilled in him the importance of the family meal. She is one of two reasons Gillespie named his latest restaurant Revival. Since she was a very religious woman, he thought the name would resonate with his family. His restaurant also revives his family's Southern traditions, such as the thank you-note that comes with the bill.

Revival is Gillespie's second restaurant since departing Woodfire Grill. Gunshow, an experiment in chef-driven small plates served dim-sum style, opened in 2013 to much acclaim. When I reviewed Gunshow in 2014, however, I found improper serving temperatures, seasoning imbalances, and lofty price tags to be the restaurant's downfall. At seven-month-old Revival, Gillespie accomplishes much of what he set out to create — a Southern, family-style restaurant that resembles an upscale version of the historic Colonnade. But the same errors that plagued Gunshow also crop up at Revival.

The restaurant, located in a white house on Church Street in Decatur, is meant to feel like you're in Gillespie's home. The waiting area is a cluster of high-back chairs set in front of a fireplace surrounded by shelves packed with family photos, books, and knickknacks. Everything except the tables and chairs came from Gillespie's family including the paintings on the wall done by Higgins, who was an artist.

Revival's chef Andreas Müller has worked at Woodfire Grill and Gunshow. The menu includes a handful of appetizers such as salads and tea sandwiches; a long list of mains, including a Coca-Cola braised short rib; standard Southern trimmings that change daily; and homey desserts. 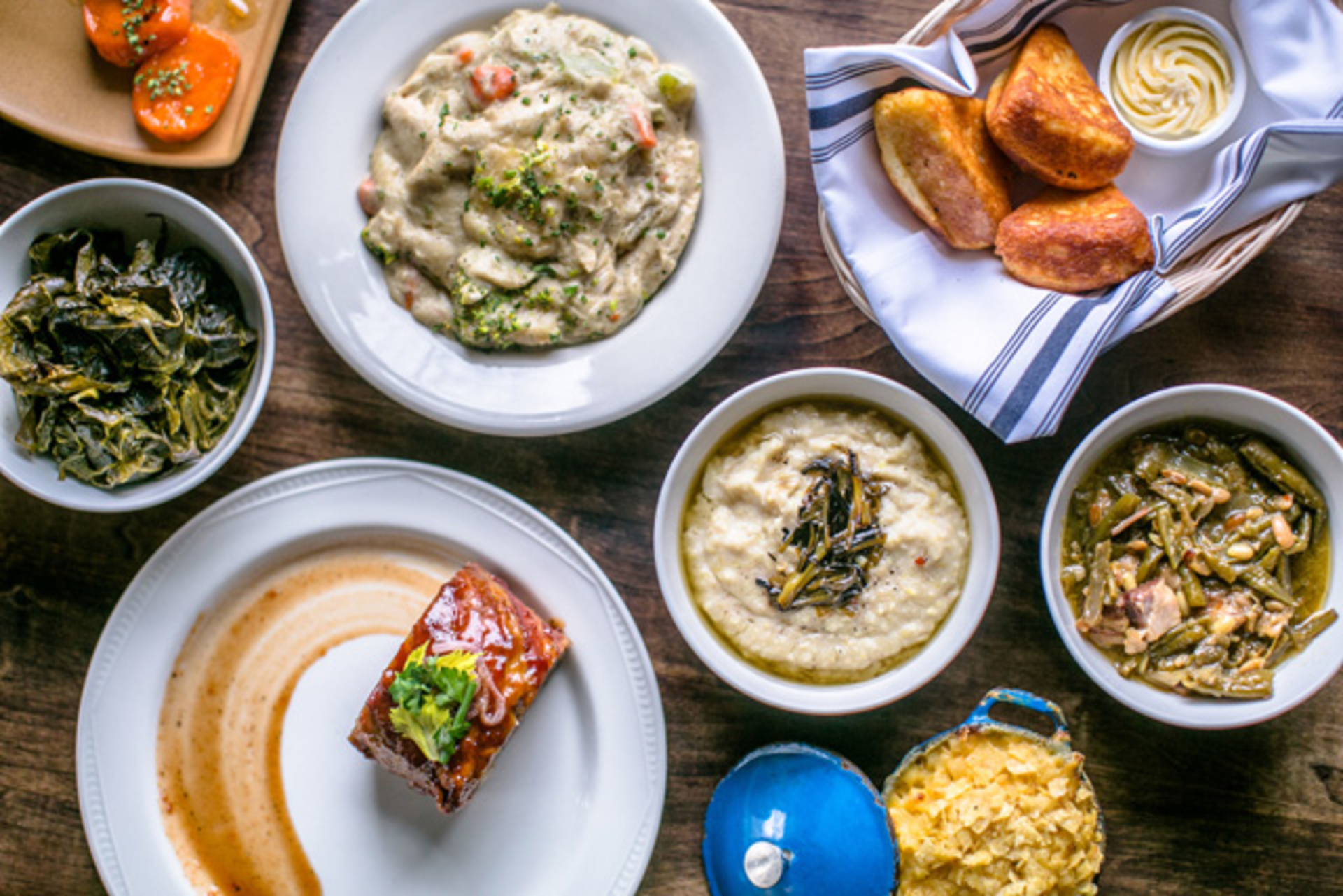 Southern food is similar to ethnic food in that people don't want to pay a lot of money for it. But with such premium ingredients like Anson Mills grits and special-order chickens from Springer Mountain Farms, the costs at this gussied-up Southern establishment are justified. Although $42 per person seems like a high price for the "family meal," the cost includes appetizers, mains, five family-style trimmings, a basket of the famed cornbread, dessert, tea, and coffee. It's a splurge, but no one will leave hungry. Ordering a la carte is also an option. Revival's entrées range from $13 to $28.

Buttery deviled ham tea sandwiches cut into neat crustless rectangles were our first bite one evening. The ham filling squished between the soft, buttered bread was so seductive I was tempted to ask for another order. An intermezzo of Gillespie's famous cornbread followed. Each salty, fluffy bite of cornbread baked in a cast iron pan was made more decadent with Gillespie's secret "mixture of fats" and a smear of the whipped room-temperature butter.

Almost as renowned as that cornbread, Higgins' fried chicken recipe is a popular choice and can be spotted at most tables. The butchered chicken chills in a thin, crepe-like batter before being deep-fried. The result is an incredibly moist fried chicken with a thin and salty glass-like crust that crackles as you bite into it. The kitchen tamed the Carolina catfish's earthy funk with a thick, tart tomato gravy. Even those who don't like catfish will revel in the fish's supple texture, which is one of the lighter dishes on the otherwise heavy menu.

The kitchen's missteps may seem minor, but they have big impact on the final result. Chicken and dumplings should be piping hot. The dumplings in Revival's version were as pillowy as well-executed matzoh balls, but the carrots were undercooked and the entire dish was served tepid. A filet of Carolina rainbow trout covered in crab-filled cornbread comes with a gravy boat of hollandaise. The seafood extravaganza buckled under too much decadence from the creamy hollandaise and cornbread. The meatloaf suffered a similar fate as it was wrapped in bacon and covered in a cloyingly sweet glaze. My taste buds were so overwhelmed I could only manage a few bites.

Many of the veggie side dishes such as the green beans and the collards rely on smoked flavors to add complexity with great success. The vinegary greens were so smoky I thought it must be bacon fat, but they are actually vegan. The smoke comes from being cooked over a wood fire. On the other hand, the macaroni and cheese won my heart; its bubbly sauce was creamy, decadent, and sharp.


Most of the desserts are classic Southern dishes you'd find at any meat and three. The lemon icebox pie, which our waitress told us was a best seller, did not disappoint with its crumbly crust, tart lemon filling, and dollops of meringue. Some, like an apple wrapped in pastry crust with an overwhelmingly cinnamon-laden sauce, are too sloppy and unbalanced. The "awesome" chocolate cake was just all right — a bit too dense, heavy, and borderline dry.

The beverage program is in flux, according to Gillespie, and everyone is lending a hand. Despite the transition, every cocktail I've ordered has been excellent. I was especially pleased to see the barkeep taste my Pineapple Upside Down cocktail before it came to my table. Seeing such care made the fun Southern-style mai tai made with vodka, pineapple, lemon oleo, lime, brandied cherry syrup, and orange cream citrate, somehow tastier. My favorite drink was the aptly named Blue Ridge Remedy, a mineral-y, herbal gin and Campari drink punched up with lime, ginger, and an intensely red beet grenadine.

Revival's servers are so effusive and hospitable, I almost felt like a member of the family. Everyone seems happy to be there and that energy is contagious. Gillespie has trained his staff well — something restaurants often struggle with these days. When chefs achieve the type of fame Gillespie has through his restaurants, TV appearances, and cookbooks, their attention to quality control and day-to-day operations tend to take a backseat. But that's not the case at Revival. I was pleased to see an apron-clad Gillespie working in the kitchen one low-key Wednesday night many months after opening. Perhaps that personal touch is why people continue to flock to Gillespie's table and are so drawn to him as a chef. He gives all the damns and that kind of passion is magnetic. (3 out of 5 stars)