Checking out the cheap eats at El Mexicano and El Bandido

Between now and Jan. 20, you better eat all the Mexican food you can stuff in your face. That's the day Donald Trump will take office and outlaw Mexican food. You'll have to travel south and scale the wall that Mexico, at The Donald's request, will build to restrict human and culinary border crossing into America.

Of course, there's a complicating factor. Most of what we call Mexican is actually Tex-Mex border cuisine. It's been around nearly a century and has, like Italian-American, developed into an "authentic" cuisine on its own. Nonetheless, I mainly hate the stuff, particularly the cumin and chili powder that overwhelm all other flavors. Don't serve me a hard-shell taco stuffed with nasty ground beef and lettuce. If Donald sends that crap to Mexico, he'll get my vote.

El Mexicano has been around a while but didn't become a popular destination until a couple of years ago, when new owners took over. The interior is nondescript with a giant painting of a female dancer. The place is routinely packed, and five of us waited an hour for a table. They do, however, take reservations, so call ahead. 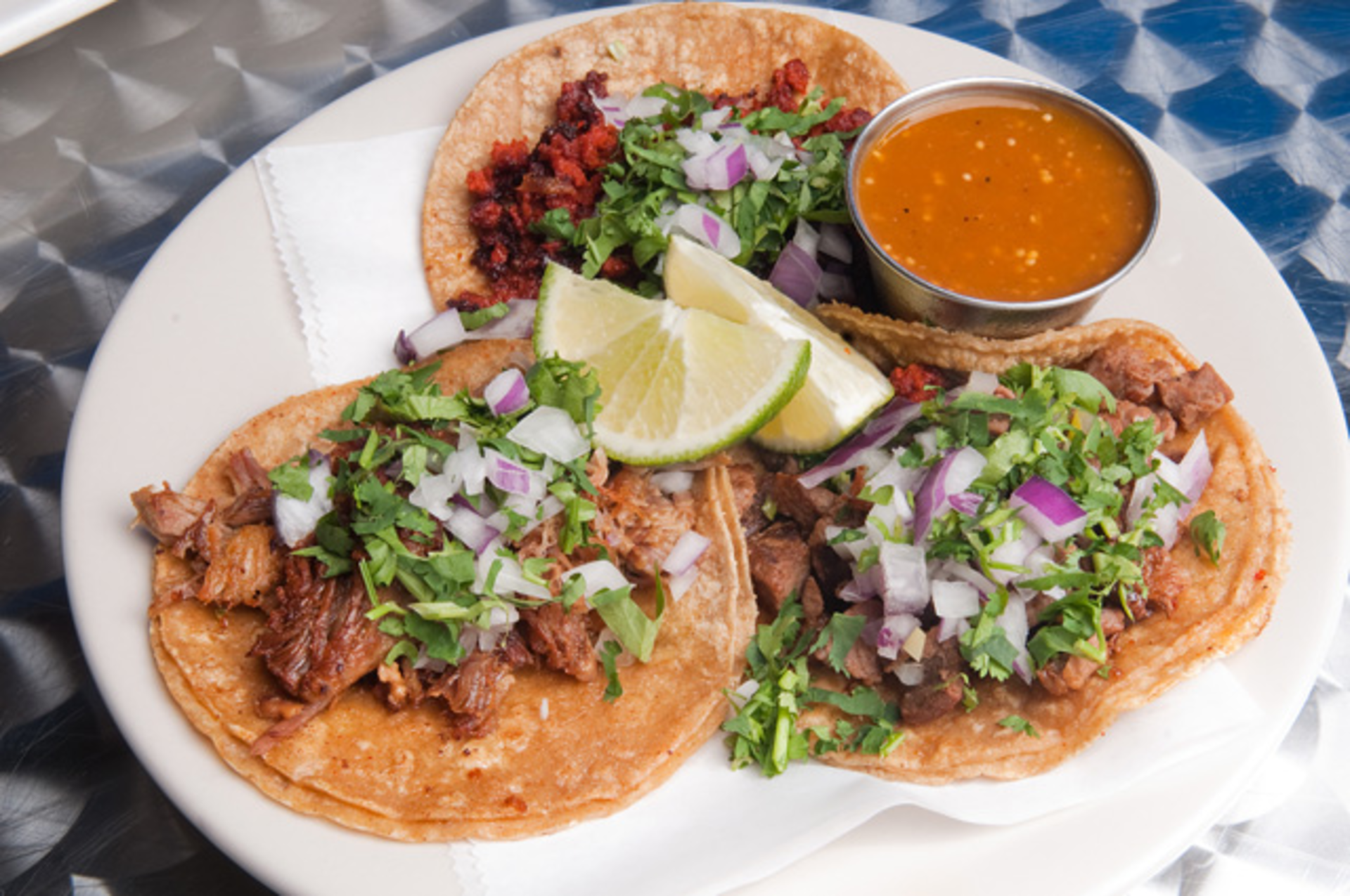 The menu here is mainly straightforward Mexican, but there are plenty of concessions to the American palate, like fajitas, a Texas invention. Don't order the Americanized tacos stuffed with lettuce, please. Instead, try the $1.99 street tacos, made with corn tortillas and filled with the meat of your choice. I ordered a few as an appetizer. The al pastor, I confess, disappointed me. It's not made on the de rigueur rotisserie, so you don't get the juicy pork bathed in pineapple juice. Instead, you get dry chunks of pork. The crumbled chorizo taco is deliciously greasy, but the carnitas were my fave — fruity and tender pork with an occasional bit of crispy fat.

For my entrée, I selected a grilled chicken breast coated in mole poblano. I've eaten a lot of different varieties of mole over the years, and I always come back to this one, famous for its shot of chocolate. Every Mexican cook has their own version, using different ground chiles and complex spices. El Mexicano's, even scattered with sesame seeds, is a bit sweeter than I usually like. The chicken is pared into moderately thick pieces that are virtually fork-tender.

For the most part, my dinner pals bypassed specialties like the chicken mole and ordered combo platters of enchiladas, chimichangas, burritos, etc. For the most part, the meats were quite flavorful without the dreaded Tex-Mex seasonings. One friend ordered a specialty of short ribs simmered in a chile de arbol sauce with nopales — maybe the best dish on the table. There are plenty of seafood dishes, including a tostado heaped with shrimp ceviche and palate-clearing lime juice.

Guacamole, served in a molcajete, was likewise uncorrupted by stinky Texas spices, but the cheese dip was almost too watery for chip dipping. Halfway through our meal, it cooled down enough to gather some heft.

In short, if you comb the five-page menu, you'll find plenty outside the Tex-Mex norm.


El Bandido means "the bandit" in Spanish, and I'm not sure how this restaurant came up with that name. Whatever, I think its self-description as Mex-Mex is a case of protesting too much. It's definitely pervaded by Tex-Tex.

The restaurant resembles its owners' other restaurant, La Hacienda on Monroe Drive. It features the typical cartoony architecture that recalls the Alamo — a pink one. I've got to say that it looks completely out of place in Little Five Points. The neighborhood association launched a furious campaign to keep Starbucks out of L5P years ago. I guess it's a measure of acquiescence that this bizarre structure has appeared.

When I think of this restaurant, I keep visualizing the chile relleno I ordered there. First, the server kept describing it as a bell pepper. I kept saying, "It's supposed to be a poblano pepper." He'd reply, "Yeah, that's it. It's like a funny-shaped bell pepper." Fine, just bring one! Ay, dios mio! I've never seen anything like it. It looked like it had been smashed by a brick. It was encased in a thick, spongy coating that reminded me of a corndog. The chile itself had basically dissolved into the filling of bland cheese. No can eat.


They don't want you to mix up tacos here. You get three of one kind unless you pay a dollar extra for each taco you order a la carte. I ordered three made with double corn tortillas, propped up by a tray with vertical slots. The tortillas were almost gooey they were so limp. The fillings were mediocre at best with carne asada leading, followed by carnitas, and trailing by a mile, a Jalisco version with grilled steak, ground chorizo, and Chihuahua cheese. It had the kind of flavors that stimulate your nostrils more than your palate. The best thing I sampled was a dense flan, properly awash with caramel.

During the years I lived in Houston, I never ran into such bland flavors even among the Tex-Mex places. I think The Donald, with his fiery temper, would be especially inclined to send even legal immigrants back to Mexico for cooking lessons.