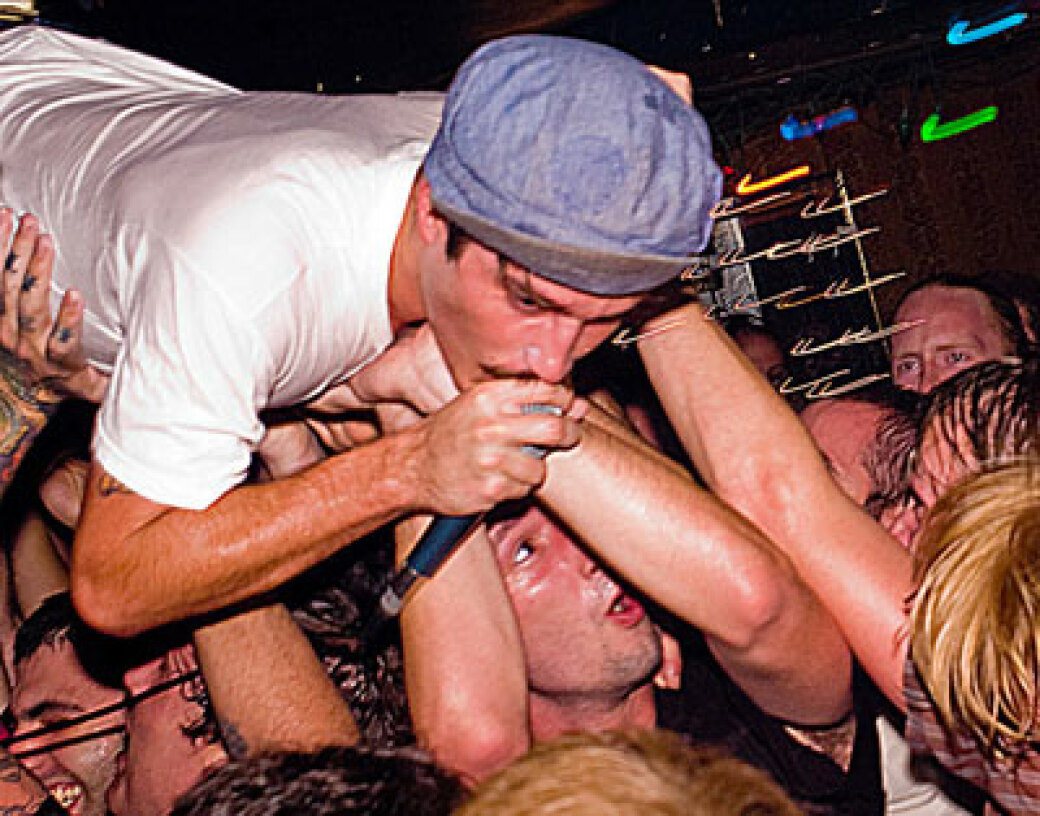 Photo credit: Eamon Siggins
BLACKOUT: Cole Alexander of the Black Lips dips into the crowd during the band's Aug. 16 performance at Clermont Lounge.
By Corey Licht Wednesday August 22, 2007 12:04 AM EDT

It feels like the air-conditioning is out in the Clermont Lounge. Sweaty bodies are packed tightly in the small, dingy club. The urgency in the air is as thick as the humidity. Hipsters stand around, hydrating with gulps of cold Pabst. They seem oblivious to the gyrating stripper baring a bit too much flesh behind the bar.

Since 1968, the Clermont has been one of the seediest of Atlanta's landmarks. Everyone from the Pixies to Kid Rock has warmed the lounge's vinyl bar stools. What sets the Clermont apart from other Atlanta strip clubs are the dancers. The lounge favors personality and individuality over an ideal body shape. The result is an atmosphere that's fun, wild and often bizarre. There couldn't possibly be a better venue for Atlanta's most notoriously feral garage band – the Black Lips.

By the time the Black Lips take the stage, members of Deerhunter and Mastodon are in attendance. Deerhunter singer Bradford Cox shouts some kind of cryptic apology to the Lips over the loud din, before retreating back into the anonymity of the crowd. When the band is finally set up, legendary Clermont dancer Blondie sheepishly steps on stage in her black spandex work clothes. "Now, the Black Lips!" she half yells into the mic.

As soon as the band launches into its new single, "Katrina," the crowd explodes. A chorus of drunken, pogoing fans belts out the song's hurricane-bashing lyrics: "Oh Katrina, why can't you be serene?" Only three songs into the set, the crowd is a sea of spilled beer and sweat. A hoarse voice from the back shouts, "Turn on the goddamn AC!" – a request Jared Swilley, the Lips' bassist, repeats to no avail. AC or no AC, the show goes on with a raucous version of "Not a Problem."

The band's trademark exhibitionism is surprisingly absent from the set. There are no instances of public urination or intraband make-out sessions. Instead, the band plays its brand of jangly flower-punk fast and tight, proving the songs can stand on their own.

By the time the Lips finish their set, the concrete floor is caked over with a sludge of beer, sweat, spit and dirt. The sweat-drenched audience shuffles outside for some much-needed fresh air. Out on the porch, the scene is cool and calm. It's a who's-who of the Atlanta music scene, but everyone seems to be on equal footing. Musicians chat with fans, and friends catch up. It's a refreshing end to a night trapped in the belly of the beast.