Summer Guide - Summer Road Trip: Fireworks and loathing at South of the Border 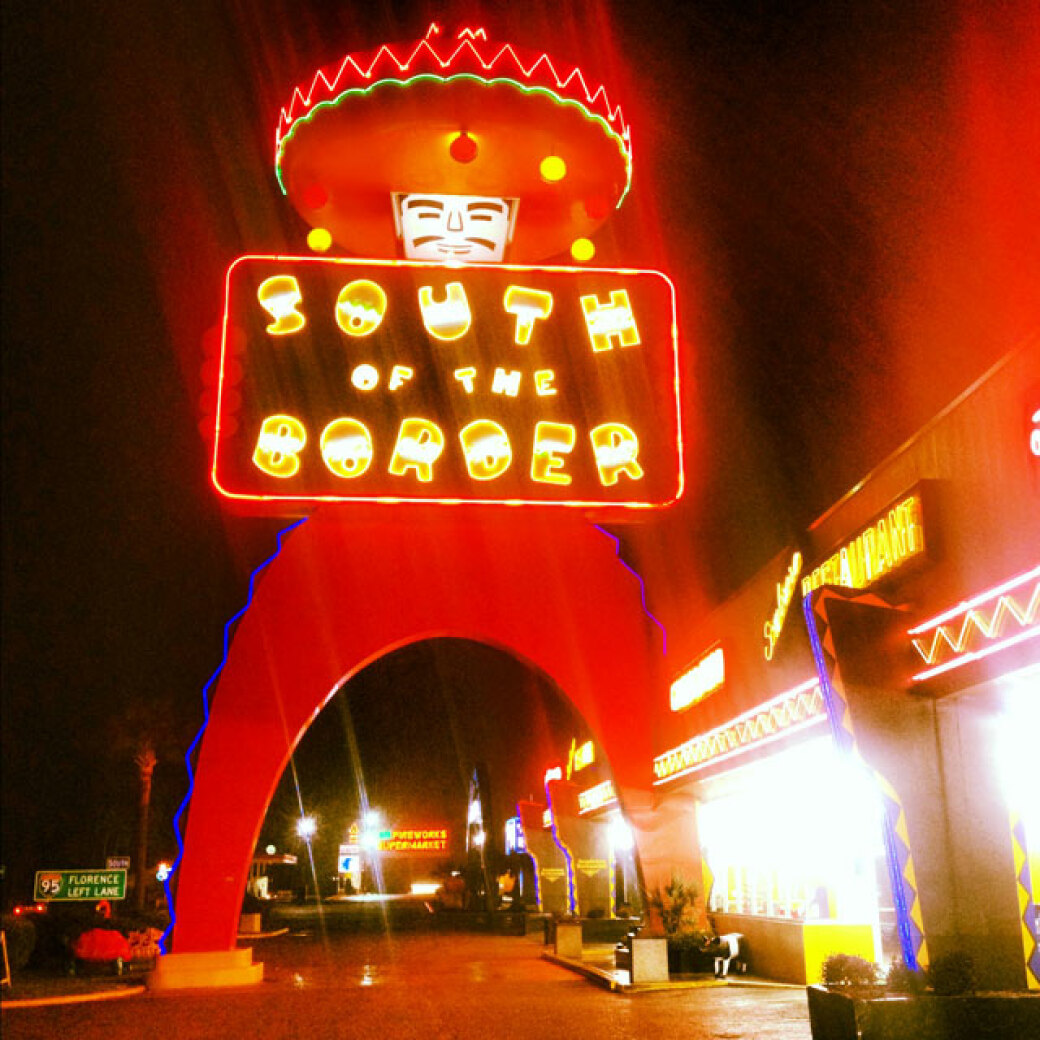 A few weeks ago, when I mentioned to an old friend that I was visiting South of the Border, he replied, "Nooo! That place is haunted!" That was a first. I was intrigued.

While researching the trip, I'd read some potentially dubious information about the place, an extravagantly unusual motor lodge along I-95 on the border of North and South Carolina. A guy named Alan Schafer started a beer stand on the site in 1949, back when the closest North Carolina counties were still dry, and eventually built it into a massive attraction with a motor lodge, theme park, multiple restaurants, fireworks stores, reptile zoo, and a bunch of knickknack shops. It isn't as much a destination as it is an overblown rest stop. According to Internet lore, Schafer become a recluse later in life, building strange, interconnecting houses and hidden rooms on the South of the Border property before passing away in 2001. That probably isn't true, but I'll get back to why later.

The old friend explained to me on Facebook that while on tour with a band years ago, "We parked the van there and slept during the wee hours. I had one of the more terrifying dreams I've ever had ... intensely related to Native American culture. I woke feeling a bit like perhaps Jack Torrance would, having been speaking with the Overlook Hotel all night and shown things from different eras."

?
When our car pulled off of the Interstate and into the neon-lined parking lot, I knew what he meant. I don't really believe any mumbo jumbo about dreams and hauntings and ghosts, but I think if there is any physical place that looks like a nightmare of past American eras, it is South of the Border.

Visually, this place belongs to the "Big Roadside Attraction" era of the '50s and '60s, when yacht-size cars sailed American highways, guzzling a gallon of gas for every few miles and spewing unregulated exhaust fumes. Everything is big here: The carports at the motel rooms are big, the imitation space needle with a sombrero on top is big, the putt-putt course is big, the marquee — a neon cowboy with his legs arched over a road so that you can drive under him — is big. The compound stretches hundreds of yards between I-95 and highway 301. The standard motel rooms are a modest size, but I'm guessing the "executive suites" are big, too.

?
My girlfriend, who doesn't particularly love bumming around ratty motels, found our room to be damn near spotless. The rooms don't have any of the extravagant kitsch, but they each provide the standard amenities, such as a bed, TV, clean bathroom, and coffee pot, that one expects.

The late mid-century was a good era for design. It's easy to be nostalgic about the clean advertisements and outdated morals of that time when they're on an entertaining show like "Mad Men." But without Jon Hamm around to make it look sexy, it's obvious that era of Americana has not aged well. Some of the neon is flickering or burnt out. The parking lots are vast, empty broken fields of asphalt that, at least on the weekdays we dropped in, are lonely to the point of inspiring an existential crisis. The place's mascot, a smiling, sombrero-wearing guy dubbed "Pedro," feels racist, like if a whole theme park were decorated with the Latino version of Mammy.

?
I cannot, with any good conscience, recommend the food at South of the Border. When I asked the nice lady working at the front desk of the motor lodge, she even replied, "People say they like the Sombrero Room." See what she did there? She nearly said, "Other people might eat that crap, but not me because I am a person with self-respect and taste." Late that night, we did end up in the 24-hour Hot Tamale stand, drinking cheap Budweiser and trying to flavor the weird corn tubes that they call tamales with as much hot sauce as possible. We were utterly alone in doing this, except for two teenagers who walked in, saw that two other people were actually in this joint, and then walked back out.

We drove a few miles to eat at Del Sol, a Mexican place that had caught our eye in nearby Dillon, S.C. Our fajitas were fine and definitely more edible than what we were served in the tamale stand, but still, it isn't what I'd call "worth the drive." The only good food we had on the whole trip was a meal at Scott's BBQ, a pit-style, whole-hog place in Hemingway, S.C., that serves up vinegary plates of pulled pork smoked overnight by a renowned master of the craft. The 'cue was a tad dry, but with a slathering of hot vinegar sauce, it became divine. That place is worth the drive. So, why is South of the Border worth the drive?

?
In a practical sense, it isn't. South of the Border is supposed to be a stopping point, a place to get some gas and maybe stretch your legs on the way to somewhere else. But if you drive there and decide to stay awhile, you'll see that it starts to feel like a lesson in American history. There is the violence of manifest destiny in the appropriated cultural artifacts. There are the wonders of our ravaged nature on display in the Reptile Lagoon. The stores are stocked with the worthless treasures and knickknacks of global capitalism. All of it is so empty that it possesses the solemnity of a museum. This is really why I don't believe that the late owner of the place built any secret rooms. You don't need a secret room to hide in this place. Just pick any random spot and you can probably be alone.

?
I should also mention that the fireworks selection is unparalleled. On the way up, I stopped at Wacky Wayne's Fireworks near the Georgia-South Carolina border and it is no competition for the knowledgeable staff and huge selection at South of the Border. The staff will go on about bottle rockets and mortar shells until you're confident that you're getting what you want. If you appreciate the American tradition of blowing things up to celebrate our history, or just blowing things up to blow them up, this is a shopping experience you need to have. After we had soaked in as much neon and beer as we could at South of the Border, we drove out to a wide-open field and fired off a few bottle rockets.

After my trip, I read that Ben Bernanke, the current chairman of the Federal Reserve and one of the most powerful men in the world, used to work here in the summer while he was a college student. He wore a faux-poncho and served diners in the Sombrero Room. Maybe that is a bit of meaningless trivia or maybe it is another lesson in American history, something about the way places from our past continue to define the shape of our present.

Where To Watch Fireworks In Atlanta

Content:_:Where To Watch Fireworks In Atlanta 2017

Content:_:Where To Watch Fireworks In Atlanta 2012

Content:_:Where To Watch Fireworks In Atlanta 2011

Content:_:Where To Watch Fireworks In Atlanta 2010

Content:_:Where To Watch Fireworks In Atlanta 2013