Food Issue - Is there an Atlanta barbecue?

In a sea of regional barbecue styles, Atlanta 'cue could have an identity crisis 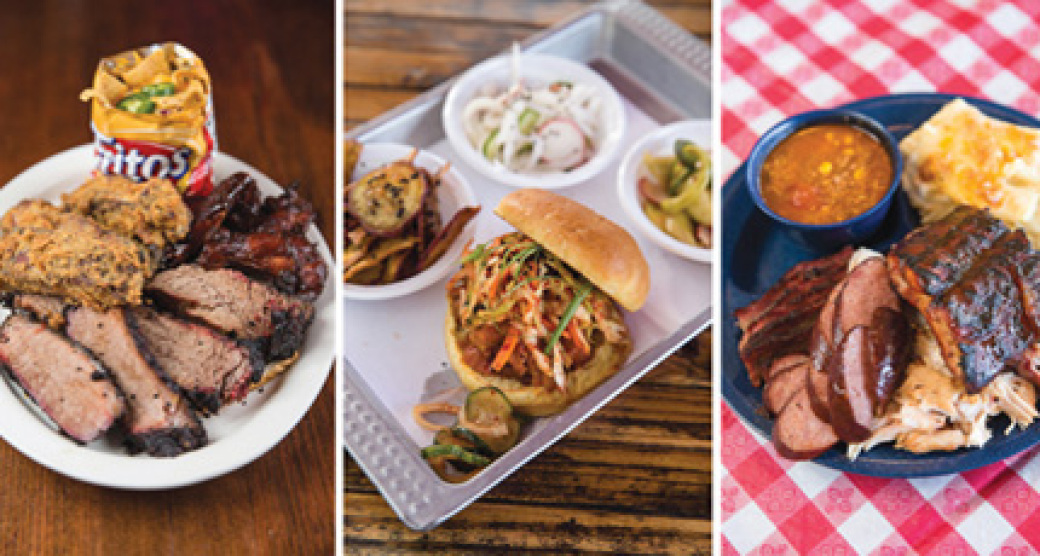 America's food map is dotted with cities and regions that have distinct identities within the world of barbecue, styles that typify a specific geographical area. When you think Memphis, you think dry-rubbed ribs. Eastern North Carolina? Whole-hog pork with a vinegary sauce. Texas? Beef, pardner. Central South Carolina is all about mustardy mops, while there are pockets of Alabama where mayo-based sauces practically paint the town white.

But is there an "Atlanta style" of barbecue? Arguably the unofficial capital of the South, Atlanta should be known as a barbecue mecca the way Memphis is, right? Or Austin? Hell, even Lexington, N.C. — with a population of fewer than 20,000 — is more of a bona fide barbecue destination than we've ever been. Atlanta is situated in the heart of barbecue country, but when you ask some of the area's best barbecue bloggers and chefs to explain the city's place in the wider world of 'cue, you get more hemming and hawing than from a pitmaster being grilled on what's in his top-secret rub.

Fact is, if you look hard enough, you can find just about everybody else's particular styles and specialties on some local menu or other. Used to be that most places in town served a version of the pulled and chopped pork that's prevalent from Memphis to northern Alabama. Many still do, from old-school joints such as Sprayberry's in Newnan to new-'cue hotspots including Decatur's Burnt Fork BBQ. Lone Star State staples like unsauced beef brisket and sausage ("hot guts" to true Texans) have made their way OTP to suburban places like Grand Champion BBQ in Roswell and Milton. Even ribs can take on many variations, from the traditional rack at Fat Matt's Rib Shack in Midtown to wet or dry St. Louis-style ribs, as you'll find at D.B.A. Barbecue in Virginia-Highland. Whatever regional meat of choice floats your barbecue boat, it's probably being served at some strip mall, shack, or new 'cue boutique in town. (With the possible exception of Kentucky mutton. That's a taste we just seem not to have acquired.)

"We can steal — I mean, research — anybody's style," jokes Sam Huff of Sam's two BBQ-1 locations, both Cobb County mainstays. Huff knows a thing or two about the long-standing history of "style-borrowing" in the world of 'cue; it's hard to find a barbecue restaurateur in town who doesn't refer to him simply as "Sam," and then go on to freely admit to having eaten off his menu in the name of research.

Huff's influence throughout the world of Atlanta barbecue is well-documented. Along with partners Dave Poe and Dave Roberts, Huff introduced competition-caliber 'cue to the suburbs and built BBQ-1 into a superstar. The trio split after a few years, but each of them stayed in the game. Huff remains the driving force behind BBQ-1. Poe runs Dave Poe's BBQ just down the road from BBQ-1 in West Cobb, and Roberts went on to start Community Q BBQ in Decatur. Another onetime Huff staffer is responsible for Grand Champion's two OTP outposts. All five restaurants boast trophies, awards, and accolades to spare ... and all five regularly make any honest "best-of" conversation about Atlanta's barbecue scene.

Huff believes not having a singular Atlanta style is an advantage rather than a crutch.

"Not being locked into a stereotype of what barbecue is means we can pick and choose based on what tastes best," he says. "We can be a little more creative."

That creative freedom has inspired some local barbecue specialties that longtime locals might never have imagined just a few years ago. At Fox Bros. Bar-B-Q, it's the curious Frito pie that seems to get the most buzz of all. "I cook what I know," Jonathan Fox says. For him and his twin, Justin, beanless chili ladled right into a single-serving bag of corn chips was a Little League concession stand staple as they grew up in Texas. Though the staff thought the brothers were crazy when the handheld snack was first suggested for the menu, on a cold winter's day about six months after the restaurant opened, Frito pie has become enough of a signature offering that a cheffified version of it was even developed for an event the restaurant participated in last June at the James Beard House. Fox and his crew handmade their own corn chip dough from fresh masa flour and lard. They then gelatinized their brisket chili and rolled it (and a sprinkling of cheese) into balls of the dough. The balls were frozen, then fried, to make one-bite "popper" versions of the guilty-pleasure snack.

Changing long-standing beliefs about what barbecue is or isn't can be challenging. When Fox Bros. first opened, customers had no qualms about telling Jonathan that he needed to tweak his Brunswick stew a certain way or that there should always be an entire roster of sauces on the tables. Customers may have been skeptical at first, but sticking to their Texas-barbecue guns eventually paid off for the Fox boys, to the tune of more than 2,000 customers (not including to-go orders) on a typical Saturday. And now their Lone Star-style beef brisket actually outpaces good old Georgia pork as their top seller.

For perhaps the ultimate example of how no locale — regardless of how far-flung — is off-limits when it comes to influencing Atlanta's barbecue, look no further than Heirloom Market BBQ. Yes, it's been talked about dozens of times before. But drive by the tiny storefront — notably smaller than the package store next door — and take a gander at the snaking-into-the-parking-lot line every day at lunchtime, and you can't deny the cultlike popularity of Heirloom's kimchi-tinged, Korean-spiced 'cue.

But even for native Texan Cody Taylor and his wife, Jiyeon Lee, a former Korean pop star-turned culinary grad, their award-winning style was originally born of pure improvisation.

"When we opened, we just used stuff we had in our refrigerator," Taylor says. "We wanted to contribute to Atlanta becoming a barbecue city ... but I'd be run out of Dodge for injecting a brisket with miso in Texas," he says, laughing. It may have started as a by-the-seat-of-the-pants experiment, but now Taylor reports seeing some of the same Asian ingredients being used at high-end barbecue boutiques in Austin, Chicago, and New York.

Not being known for one thing (or bound to one style or specialty) has allowed Atlanta chefs — and especially barbecue cooks — to piece together an anything-goes sampler-platter approach. That in and of itself has arguably turned our city into a barbecue destination of sorts. Grant Goggans — who has reviewed more than 300 barbecue restaurants throughout the Southeast for his Atlanta-based blog Marie, Let's Eat! — says that places like Heirloom Market and Fox Bros. have given everyone else the permission to try new things and, in turn, made Atlanta a barbecue city that's too big to eat your way through in just one visit.

For Goggans, you have to get outside the metro proper to truly experience the rich depth of our 'cue heritage. Take a road trip to places like Austell, Douglasville, or Jasper and you can still find a few old-school joints that at one time typified true barbecue everywhere: meat smoked low and slow over live coals in open-air pits. Those places are much harder to find than they used to be, though, says big-time barbecuer Jason Dominy, who also writes the locally based blog Musings of a Ragamuffin. In the 1980s, he explains, new codes and health department regulations forced those pitmasters to do things like enclose their pits and install chimneys. Consequently, these mandated expenditures caused many of those historic mom-and-pops to close. Shuttered stalwarts such as Harold's Barbecue and Old Hickory House have largely faded into our barbecue past like wisps of hardwood smoke (save for the last remaining Hickory House location in Tucker), but a few institutions live on. Spots including Dean's Barbeque and Metter, Ga.'s Jomax Bar BQ offer an experience that's wholly different from ones at the many barbecue boutiques you see today ... and that's OK, according to Goggans.

These newer, slightly upscale barbecue destinations present an interesting paradox. Their traditional barbecue offerings themselves can be excellent — made with high-quality meats, expertly seasoned —and on par with what you would find at the more established restaurants. But you'll also find cheffy twists and WTF creations that would have the heads of those grizzled open-air pit veterans spinning. The menu at Westside's Bone Lick BBQ, for example, additionally features fried risotto balls, black bean burgers, and something called the Summer Saladgasm. Combine cuisine like that with super-trendy vintage decor, ironic '80s arcade games, Skee-Ball machines, and a vibe that's unapologetically as much about the party as the grub (they even have a DJ), and you've got an altogether different kind of barbecue joint.

"Authenticity can mean a lot," Goggans says, readily admitting that at least part of the recent barbecue renaissance has come about thanks to social-media-savvy foodies exactly like him.

"A lot of these new places are being opened by people who came from restaurants with established PR firms that know how to push the message out there," he says, on platforms like Twitter and Instagram.

Barbecue used to be smoked over live fires and is now cooked mostly in gas-powered boxes ... but make no mistake: The craze of barbecue-as-chef-driven-hipster-grub is often fueled largely by hype.

"When you see a bunch of bloggers all talk up a place, it could be legitimate," Goggans theorizes. "Or it could be that 10 of us all got invited to the same media event."

When he's not slinging the 'cue at BBQ-1 in Cobb County, Sam Huff is teaching sold-out barbecue classes and he's always on the search for the next roadside shack that could be an undiscovered diamond in the rough. Talking by phone (during a drive 120 miles south of his restaurant — just to look at someone's meat-smoking rig), Huff told of a recent revelation. He found a lone figure, with a beat-up trailer at an exit just off of I-75, selling pulled pork sandwiches. Sam rolled the dice, bought one, and marveled at how exceptional it was.

Huff believes so much in the sanctity of those out-of-the-way finds that he's even in early discussions to organize barbecue bus crawls, taking customers on pre-arranged routes throughout the state to hit six or seven joints in a day and exposing 'cue fanatics to new heights of hog heaven, even if it happens to be dished out inside a service station on a sparse stretch of highway (that's actually the case at Bigun's Barbeque between Ellijay and Jasper, one of Huff's favorite hidden hotspots).

So back to our original question: Is there an "Atlanta style" of barbecue? Not really. But perhaps not having a particular barbecue style is our style. According to Jonathan Fox, "good barbecue is just a mix of where you're at and where you're from." Atlanta's barbecue scene is a mishmash, a hodgepodge of random flavors and diverse influences. Yes, we have plenty of classic pulled pork and lots of traditional ribs. But we also have new 'cue concoctions being dreamed up all the time, introducing new techniques and tastes to the party. Such standbys as Sam's BBQ-1, Swallow at the Hollow, Daddy D'z BBQ Joynt, and Sprayberry's aren't going anywhere. But young guns such as Community Q, Fox Bros., Grand Champion, and even fusion-y places such as Heirloom Market bring an element of variety to the melting pot that is Atlanta barbecue. It's a diverse blend of old, new, near, and far — always evolving and constantly being reinvented.