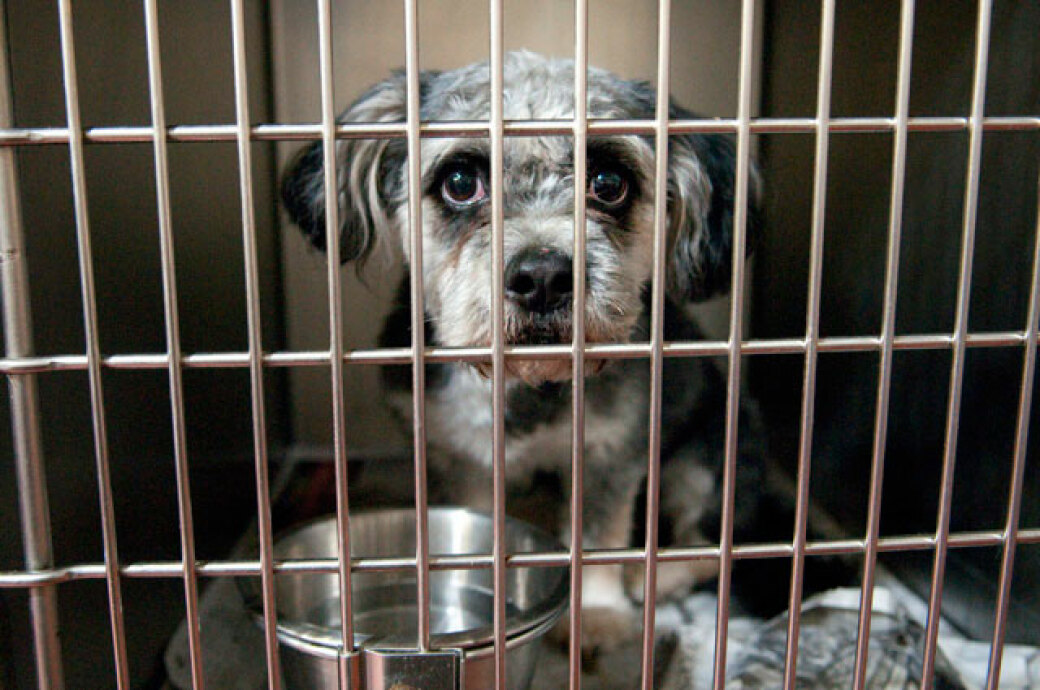 Photo credit: Joeff Davis
ADOPT ME: A metro Atlanta nonprofit now operating Fulton County's animal shelter is trying to bring down the facility's euthanasia rate and give cats and dogs, such as Gem
By Jessica Blankenship Thursday December 5, 2013 04:00 AM EST

That's apparently not what it's about, sadly. But what it actually does is just as amazing, even if slightly less adorable.

LifeLine offers free or low-cost spay/neuter clinics and has closed down the baby factories of more than 50,000 dogs and cats over the past 11 years. It also operates Catlanta (not the semi-anonymous feline scavenger hunt), a program that has sterilized more than 15,000 stray or feral cats throughout the city. The organization now runs Fulton and DeKalb counties' shelters. And it has a much larger goal: to help make Georgia's animal shelters as kill-free as possible.

Ending animal euthanasia sounds like a no-brainer. Animals are cute; therefore, let's not kill them. Why be dicks about it? Why not just let all the homeless animals hang out indefinitely in shelters until the Cosbys or someone equally loving adopts them?

The problem is that Georgia has an obscene number of ousted and homeless pets. It's one of the saddest math problems ever. More than 840 animals every month are brought into the Fulton County's northwest Atlanta animal shelter, which can only hold an estimated 300 creatures at a time. That leaves an average of 540 animals that are, um, "going to live on Uncle Jack's farm" simply because there isn't adequate space to house them. (LifeLine also hopes it can build a new shelter to replace Fulton's current facility, which was was built in 1978, to reduce Georgia's animal euthanasia numbers.)

Sure, the shelter could just release the cats and dogs it can't help rather than put them to sleep. But putting animals back on the street is essentially turning them over to starvation, suffering, and even death. Let's say the Cosbys (who, yes, are always my go-to example of the perfect family) visit the shelter to rescue a new pet instead of adopting one off the street corner. The idea that someone will give these free-range city animals a home remains a fantasy. We tell ourselves that will happen to feel better so we don't carry out death sentences humanely and quickly. But that doesn't typically happen. Are we clear? Moving on.

LifeLine is having some success. Between April and September this year, the FCAS' euthanasia rate hovered around 38 percent, down from 61 percent during the same period in 2012. DeKalb only reported a 23 percent kill rate this past September, the lowest in its history. More than 200 cities in the United States report a save rate of at least 90 percent, although generally, euthanasia statistics are hard to come by since shelters and animal control agencies aren't required to record them (the most recent numbers from the National Council on Pet Population Study and Policy are from 1997). Still, cities like San Francisco and Seattle report 16 percent and 11 percent kill rates, respectively.

"We were trying to figure out what's missing in Atlanta," says FCAS Director Lara Hudson. "Why is it so bad here?"

LifeLine's long-term approach largely sets it apart from most other Georgia shelters. Unlike typical "no-kill" shelters, Hudson doesn't suggest that shelters turn away animals once they reach capacity. Instead, the organization combats pet overpopulation, homelessness, and high euthanasia rates with spay/neuter programs, rehabilitation after injury or illness, and providing pet owners with better resources.

Instead of achieving "no-kill" status by merely closing its doors — which means stray animals suffer or die elsewhere — LifeLine wants to fix some systemic conditions that fuel shelter overpopulation. It's like achieving weight loss through diet and exercise instead of stomach stapling. In other parts of the country, Hudson says top shelters have seen as many as 95 percent of animals leave alive. She wants that to happen in metro Atlanta and elsewhere in Georgia.

To make that shift, shelter leaders want to change how animal control employees view their profession and engage with their communities. Instead of simply rounding up stray animals and dropping them off at overcrowded shelters, they want animal control officers to work with pet owners. They can forge relationships with pet owners and become a liaison for services and resources. By doing so, more animals might remain in healthy home situations and out of unstable shelters.

Clearly, LifeLine's vision for the state's animal shelters to become less of a ceaseless bloodbath is commendable. But underlying social and economic factors largely contribute to Georgia's pet homelessness and overpopulation. More than 1 million Georgians are living in poverty, with more than 70,000 of them residing in DeKalb County alone. Are no-kill goals feasible given those larger issues?

"For people in underserved communities, pets are also underserved, so we bring programs into those communities," Hudson says, noting the nonprofit's free vaccination events, spay/neuter programs, and other proactive measures. "It's a lot cheaper to keep the animals in the community than it is to bring them into the shelter and try to find new homes for them."

Despite the considerable challenges that lie ahead, Hudson and LifeLine are encouraged by the progress they've already made in their short time at the helm of Fulton and DeKalb counties' animal shelters. The euthanasia rates at both shelters are on a diminishing trend, and LifeLine's efforts are taking root to propagate the city with opportunities and programs that would keep more animals out of shelters and in stable homes.

Our goal is to not to have to euthanize any healthy or treatable animal," Hudson says. "That's what's next. It's going to take a little time to get there, but we're committed."