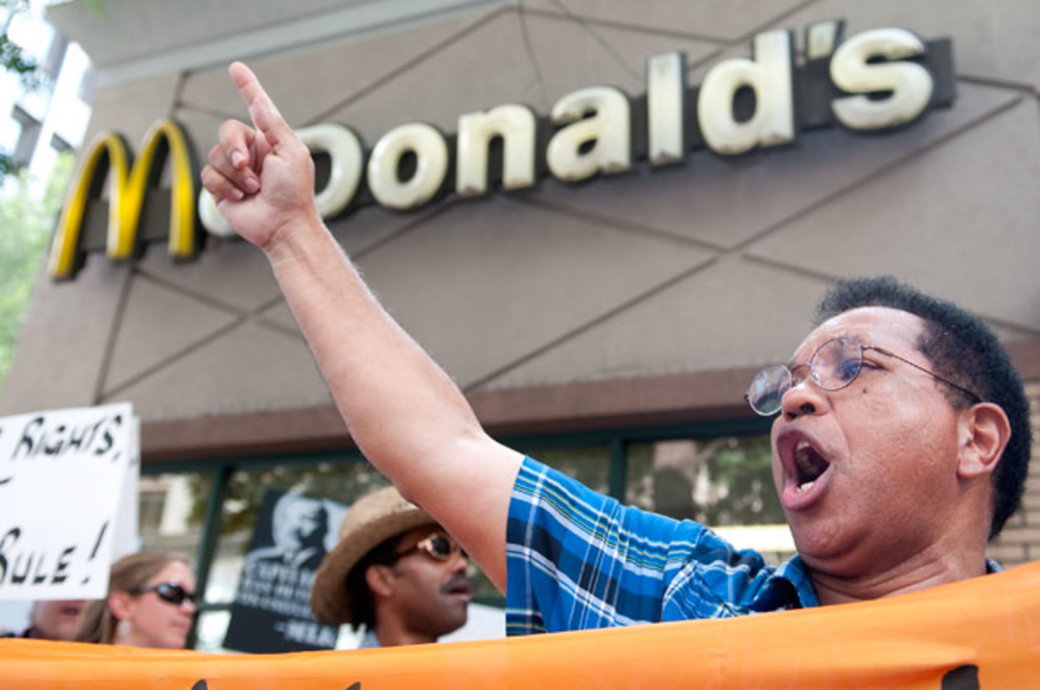 On April 15 I'm joining fast food workers in Atlanta, and all over the country, for a massive mobilization of workers seeking higher pay. We are going on strike for $15 an hour and the right to form a union. We call on workers, students, and community members to join us. The fight is for all of us.

Why am I going on strike? I have worked in fast food for 20 years, since I was 16 years old. After five years working at the same Burger King, I still make only $7.25 per hour. No one can survive on those wages. They don't even cover the basics. I used to work for two Burger Kings at once in order to support my family and myself, and that still wasn't enough.

Burger King made $233.7 million in profit in 2013. That same year, McDonald's made a net income of nearly $5.6 billion. Fast food is a $200 billion industry. We work for corporate giants. The simple fact is that they can afford to pay their workers $15 an hour. We won't stop until the industry listens and raises all our wages to $15 an hour and recognizes our right to form a union.

It's crazy how you can work for so long and still not earn what you're worth. Working and living paycheck to paycheck, I'm often late paying bills. I've had my lights, heat, and electricity disconnected. I've needed to bring home food from work in order to feed my family because I didn't have enough money to buy groceries. I've walked miles to get to work because I didn't have any money for transportation.

So I'm going on strike, because I'll do whatever it takes to get $15 and union rights. When we have a voice on the job, we'll be able to stand up for ourselves. Rich companies like Burger King won't be able to take advantage of its employees anymore.

Our movement is spreading. It's not just fast food workers who are standing up to this injustice. It's powerful to see college students, adjunct professors, and home care providers, as well as airport, Wal-Mart, and child care workers join our fight. They know that we're all in this together. There are millions of us who work hard, are paid pennies, and get no respect. We all deserve more.

I'm also proud to strike because companies such as Burger King and McDonald's continue to take advantage of us by paying us much less than we're worth. Annual income for a full-time worker paid the federal minimum wage of $7.25 per hour is about $15,000, which is slightly above the poverty line ($11,945 per year in 2012) for an individual but not necessarily for someone supporting a family, according to the Center for Poverty Research.

Last week McDonald's announced that it would be giving raises to its workforce. Our strikes and rallies are working and show how powerful workers can be when we stick together. Our efforts forced McDonald's — one of the biggest companies in the world — to do something it didn't want to.

McDonald's idea of a raise comes out to one dollar above the local minimum wage and only impacts 1 in 10 McDonald's workers. The raises apply only to those who work in corporate stores and not franchises, which make up the bulk of McDonald's business. That means 90 percent of McDonald's employees won't get a penny more. As someone who is paid $7.25 per hour, I can tell you that an extra dollar an hour would not get me out of debt, pay the rent, cover my bus pass, or fill my kids' bellies. It's not real change, it's a corporate PR stunt.

Until companies including McDonald's and Burger King pay a real living wage and grant workers the right to a union, the Fight for $15 will only continue to grow. We've had real victories, like $15 minimum wages in San Francisco and Seattle, and $15 wages for L.A. school workers and Baltimore hospital workers. So we'll keep going on strike. I know I will, until Burger King and McDonald's are paying living wages right here in Georgia.

And like the college students, professors, and home care, airport, Wal-Mart, and child care workers who are joining us on April 15 here in Atlanta and all across the country, more and more people will join this movement because we're winning and growing. When one company gives raises, others will follow. That's good for everybody.

Quiana Shields is a Burger King employee from Atlanta. She is an active member in the Fight for $15.