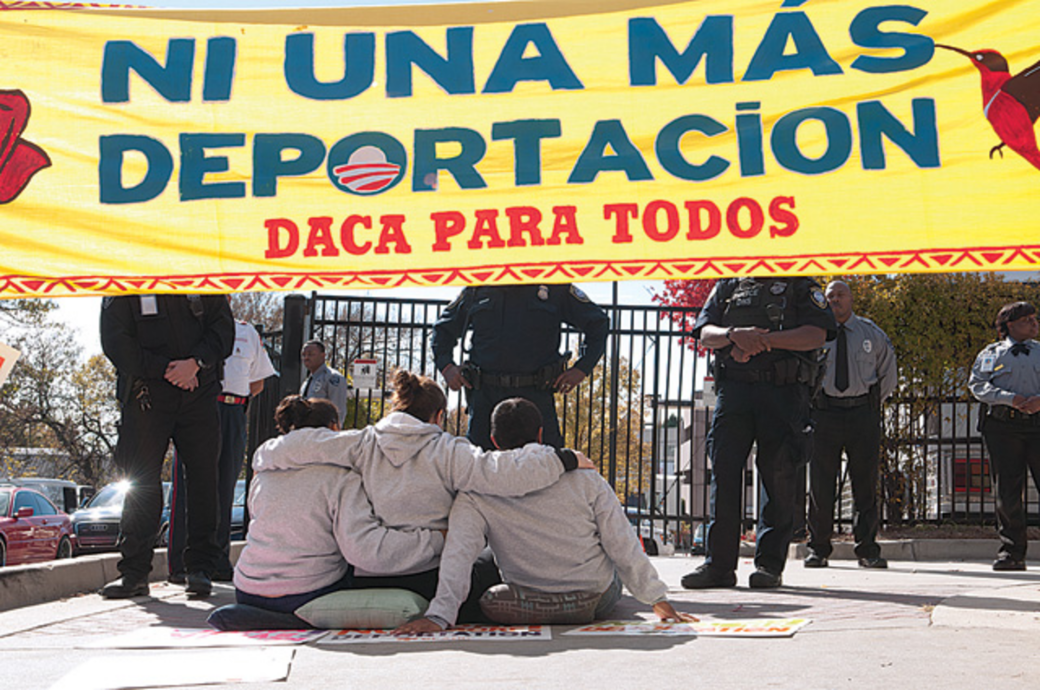 On June 27, four activists were arrested for blocking the roads to the U.S. Immigration and Customs Enforcement office in Downtown. More than 100 people calling for a moratorium on the deportation of all undocumented immigrants looked on as the activists were taken into custody.

The protest was in response to the U.S. Supreme Court's deadlock over President Barack Obama's executive actions that would grant relief from deportation and permission to work to immigrants who meet certain requirements. Millions of immigrants and family members across the country had looked forward to a day when they didn't have to fear being picked up by local police or ICE and torn from their families. The court's stalemate was a devastating blow to their dreams.

The dismay over the Court's decision was not the only thing driving the protest and calls for a moratorium. Metro Atlanta has also been the site of U.S. Immigration and Customs Enforcement (ICE) raids that have rounded up women and children from Central America. These actions, often times aided by local law enforcement, are part of what activist Carlos Medina called a "sinister deportation machine" that creates a hostile environment for immigrants and drives many further underground. We should be creating welcoming communities for those who have often fled horrific conditions, including deep poverty and war.

Earlier this year, a group of more than 50 Georgia elected officials and faith, community, and labor leaders called for ICE to halt the raids and for the federal government to provide a fair process for asylum seekers to pursue their claims. They said it was "deeply troubling for ICE to target mothers and children seeking refuge from persecution, murder, and torture in their home countries in Central America for deportation back to those same conditions and worse."

ICE officers' conduct during some raids this year has raised legal concerns. According to the Georgia Latino Alliance for Human Rights and area attorneys, families were not shown a warrant before ICE entered their homes. They say ICE failed in some instances to obtain consent and used coercion and deception to enter homes.

The Supreme Court's inaction and ICE raids are compounded by local police targeting immigrant communities. Four Georgia counties participate in a federal program called 287(g) that allows sheriff's deputies to perform certain functions of ICE officials. For example, if an undocumented person is pulled over in Gwinnett County for even a minor traffic violation, he or she can be held until they are handed over to ICE, after which they will likely be placed in deportation proceedings.

During the same week as the Supreme Court's announcement, Gwinnett officials renewed the county's 287(g) program. No public discussion was allowed prior to the vote. The program has contributed to immigrants residing in Gwinnett's reduced trust in local law enforcement. That's led to less safe communities for everyone. Antonio Molina, who testified against the program's renewal after the contract was approved, told elected officials that 287(g) sends a "mixed message."

"There are a lot of families that are very worried about coming to the police and letting them know what's occurring under their own roofs at times because they have a fear that if they do come to the police, and make the call, the first thing that's going to happen to them is that they're going to get deported," Molina said, according to the Gwinnett Daily Post.

Gwinnett's participation in this program also contributes to tearing apart families who have resided in this community for a long time. According to a 2014 report by the ACLU of Georgia, GLAHR, and others, approximately 54 percent of ICE arrests where entry dates are reported involve people who entered the country in 2003 or earlier. (Disclosure: I co-authored the report.)

The number of children and spouses who lose family members to deportation is underreported. Data indicates that an estimated 48,135 U.S. citizen children had a parent arrested by ICE in Georgia and at least 17,497 individuals had a spouse arrested by ICE in Georgia between 2007 and June 2013. Local law enforcement during the same time period has handed over to ICE the parents of an estimated 40,111 children who were born in the United States — in other words, citizens — and the spouses of at least 11,421 people.

Gwinnett has gained notoriety as a leader in this respect. Between 2007 and June 2013, 7,595 detainers — non-judicial documents issued by ICE to localities asking them to hold a person until the agency can pick them up — were issued against people at the Gwinnett jail, the report says. This is the highest number in Georgia, topping the Department of Corrections. Nearly 96 percent of those issued detainers in 2013 by ICE were of "dark or medium complexion."

We are hopeful that Congress will pass comprehensive and just immigration reform. But the Obama administration can take actions to ease the pain of immigrants and their families. It needs to put a stop to ICE raids and deportations. National and local authorities such as those in Gwinnett should also end programs such as 287(g), which frighten immigrant communities and jeopardize public safety.

Azadeh Shahshahani is the legal and advocacy director with Project South and a past president of the National Lawyers Guild.