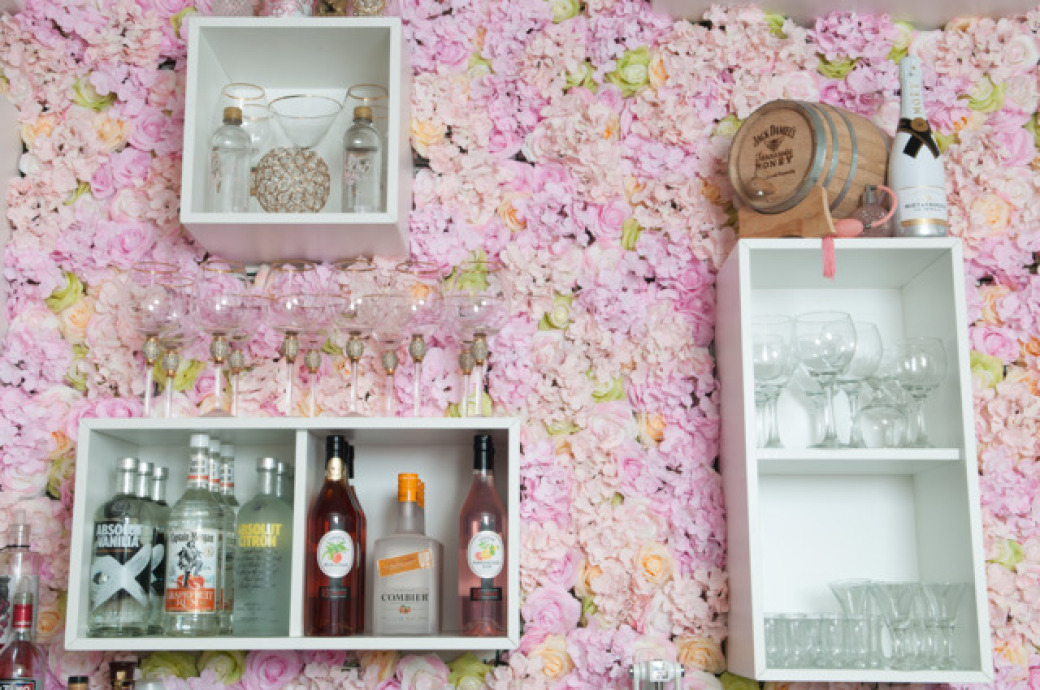 At first glance, Puff & Petals looks much like a beauty salon. From its opaque pink exterior covered in rosebuds and strings of pearls, curious passersby could enter expecting the stringent smell of nail polish or recently flat ironed hair. Instead, the aroma of a low country boil drifts from the kitchen to the door and sets the establishment's identity straight: This is Edgewood Avenue's newest bar, lounge and restaurant, and it's just as much about the experience as it is about the food.

While the lounge's decorative scheme might sound visually overwhelming, K pulls it off with subtle taste. Chandeliers hang above and sheer pink curtains dangle between pink vinyl booths and white countertops. The salt at each table is pink. Framed playful quotes cover the back wall, like "She who leaves a trail of glitter is never forgotten" and "Never chase anything but drinks and dreams." To the right of the narrow space sits the bar, set against a backdrop of artificial pastel orange, green and pink roses and hydrangeas. "The whole theme is really girly," K says. "I just wanted Puff & Petals to be a place where women can feel safe and comfortable and have great drinks."

ENDLESS SUMMER: The Cigar on the Beach cocktailJoeff Davis

A mannequin with a bedazzled mons pubis will catch the attention of anyone who heads back toward the restroom. The figure holds a baby doll in each hand and, according to one bartender, represents K's wish to conceive twins, which she has publicly discussed on her reality TV show, "K. Michelle: My Life." But, as the last of ten "house rules" printed on the back of the menu instructs: "Do not ask us every five mins 'When is K. Michelle coming??' You know she has checks to cash!"

The bar carries bottles of Southern Peach, which K developed in collaboration with Jack Daniel's Country Cocktails, but the house cocktails are some of the most creatively presented in the city. The Green Light ($9) — a mix of vodka, Combier, fresh lemon and lime, and a splash of champagne — comes out in a lightbulb that doubles as a glass and is illuminated from beneath. "I encourage everyone to take it like a shot," lead bartender Antonio Hill says. Deviating from the traditional Sex on the Beach, the Cigar on the Beach ($14) consists of Johnnie Walker Black Label scotch along with citrus, cranberry and pineapple juices. Smoke swirls between dry ice cubes and the stereotypical cocktail umbrella, but the cup sits inside another cup containing sand, a miniature beach towel, a shell and a plastic palm tree.

The food pays homage to K's Memphis upbringing. After hosting a cook-off of sorts, she hired chef Nilka Hendricks to lead the kitchen. Hendricks hails from Long Island, New York, but dominated the Southern dishes K challenged the competitors to make, likely winning the artist over with her twist on the sloppy joe, which K grew up eating in her grandmother's kitchen and required as a Puff & Petals menu staple. Chef Hendricks' version, called Smothered & Covered ($8), spills over a Hawaiian roll per K's request, exceptionally saucy and sweet.

One tapas standout is the Crab-Tini ($14), which consists of lump, claw and backfin meat medallions that are baked instead of fried. The accompanying remoulade sauce contains kalamata olives among other atypical ingredients that contribute to its pungency. The Southern Charm entree ($15) is advertised as shrimp and grits but actually contains polenta made super creamy with gouda, asiago and cheddar cheeses. "I have to trick people because if the description said 'polenta,' people wouldn't order it," Hendricks says. Chunks of andouille sausage dot the bowl and pack some heat.

The potato chips that appear as a side to the fish and chips ($14) surprisingly overshadow the flash-fried salmon nuggets. Shrugging, Hendricks claims simply to slice the potatoes with a mandoline and fry them in canola oil.

Within the next month, Hendricks says more menu options will debut, such as strawberry chicken and waffles and a banana pudding cheesecake. Plus, a recreational oxygen bar is slated to open on the second floor as soon as August. "We're going to offer the hookah experience with individualized oxygen tanks," K says. "They are healthier and organic."

Until then, Puff & Petals guests can enjoy the $7 tapas menu, which is available on Tuesdays, as well as $5 Puff Shots of fruit-flavored vodka on Tuesdays, Wednesdays and Thursdays.

Puff & Petals' similarity to a spa doesn't stop at its pinkwashed facade, located at the corner of Edgewood and William Holmes; much like a fresh manicure or hair cut, the place leaves guests feeling good. "I like food more than sex," K says. And that Green Light cocktail yields one hell of a buzz.