Innovators and creatives explore the subversive art of pushing an agenda 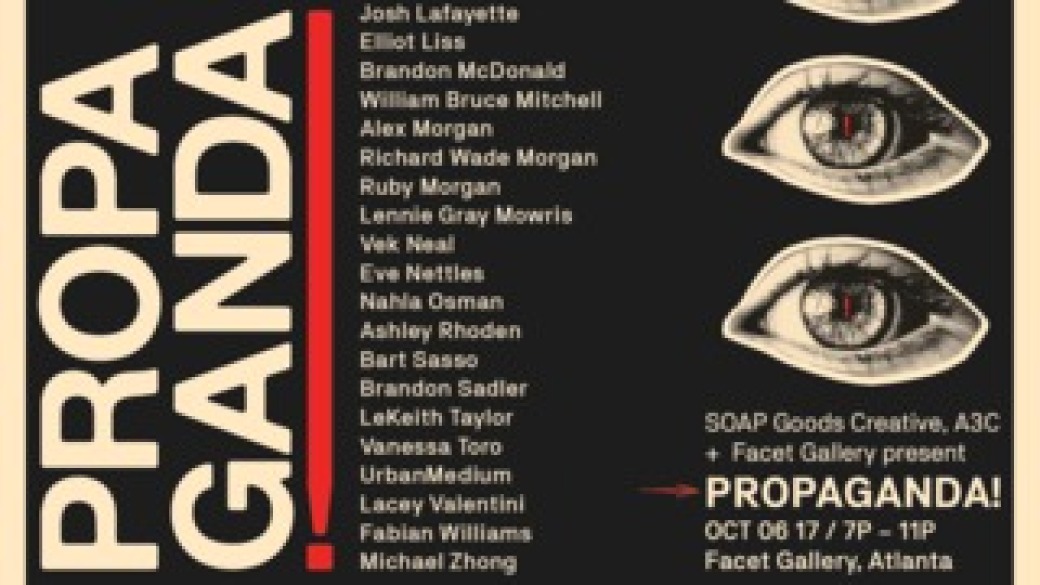 With buzzwords like "fake news' and "alternative facts' lighting up the airways, the nuanced historical significance of propaganda is often buried under negative connotations. On Fri., Oct. 6 at 7 p.m., SOAP Goods Creative, Facet Gallery and the A3C Festival are bringing together Atlanta artists 38 of them to be exact to examine and celebrate one of the oldest subversion tactics at PROPAGANDA! a design show. The exact purpose is to "spread ideas, information or rumor for the purpose of helping or hindering an institution, a cause or a person.'

Freelance graphic designer Jade Carter was surprised but excited when she was asked to create a poster for the exhibit. Carter has been working for A3C for three years as a graphic designer, and PROPAGANDA! will be her art show debut. Carter's piece started with a list of things that made her angry. She thought of the Cobb County police officer caught on tape joking that officers only kill African-Americans.

"I guess it's a joke, but people are dying,' Carter says.

Her poster plays off the classic "We want you' World War II recruitment poster, but instead of Uncle Sam, Carter positions the Cobb County offer above his comment, "We only kill black people.' The words "We the people' are highlighted within the phrase, a decision Carter says was made to turn the concept on its head.

"I am making a statement with my work, and I have never really done that before,' she says.

Each artist will display an 18-by-24 poster with the unrestricted social, political or emotional propaganda of their choosing. Miya Bailey, Stefan Kjartansson, Vanessa Toro, Dosa Kim, Richard Wade Morgan, FRKO, JOEKINGATL, Bart Sasso and more are slated to perform or display their work. All the posters will be new, original work, but the propaganda will continue outside of the visual pieces: Artists, activists and musicians are encouraged to share minute-long pieces of spoken propaganda when the PROPAGANDA! Soap Box is activated.