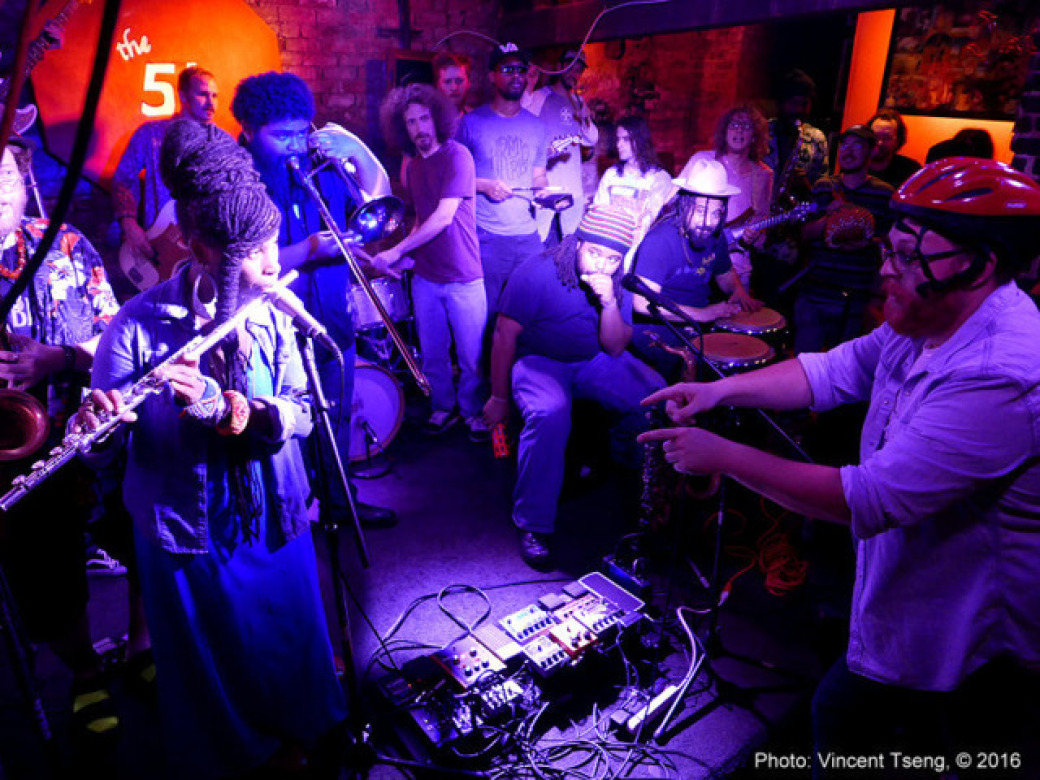 While our city touts its fair share of impressive rooftop and patio bars, we also know that, just like in high school, the real fun goes down in the basement. Moody lighting, comfy furniture and great music make you feel like you're at home ... if your home had cooler d̩ecor and way more booze.

In no particular order, the bars on this list range from dingy to trendy. Some are great for seeing and being seen, while others are the social equivalent of hiding under the covers. No matter your mood, you're sure to find what you're looking for at one of these underground watering holes.

If you're in the mood to get fancy, head uptown to the swanky Supply & Demand in Buckhead. Bartenders in bow ties and black and white tiled floors are reminiscent of a 1920s Parisian bar, but the space gets a touch of modernization from the exposed piping. For beverages, choose from an extensive whiskey list or keep it classic with a Prohibition-era cocktail. 3219 Cains Hill Pl N.W. www.supplydemandatl.com.

Top tip: The venue is frequently booked for private events, so be sure to call ahead.

As one of the most popular and long-standing late-night spots in the city, Ponce de Leon's MJQ can get crowded especially on Wednesdays, which is College Night (avoid if that sounds like a nightmare to you). Built out of a converted parking garage, MJQ is cave-like, grungy, loud and dark. Drinks are cheap, just be prepared for few options beyond Red Stripe and Red Bull vodkas. The main room usually plays either hip-hop or mainstream EDM, but there's a smaller room that with more eclectic DJs that play anything from house to soul to disco, and a connected live music venue beyond that dubbed the Drunken Unicorn. 736 Ponce De Leon Ave N.E. www.thedrunkenunicorn.net.

Atlanta boasts plenty of bars with extensive beer lists, tap takeovers and rare finds. What makes Wrecking Bar cool, besides being located in the basement of a historical Victorian home in Little Five Points, is that they brew their own excellent beers in a warehouse behind the building and pump them directly into draft towers at the bar. In addition to having the freshest beer possible, Wrecking Bar's food menu changes seasonally and features local ingredients grown on the restaurant's own Wrecking Barn Farm. 292 Moreland Ave N.E. www.wreckingbarbrewpub.com.

Top tip: Try a few beers on draft and then get a growler of your favorite to take home.

East Atlanta Village is known for its dive bars and music venues, but the dancing goes down in the Basement. Check the calendar to find something up your alley. Recurring events include the Indie Pop Dance Party, HEYDAY 80s Dance Party and The Groove: All Night R&B. A fan favorite is Keep On Movin! hosted by Electric Western every fourth Saturday of the month. If you're into getting sweaty with the classics, it's the place to be. 1245 Glenwood Ave S.E. www.basementatl.com.

Top tip: Check the event schedule to make sure you're dressed in theme.

This sandwich shop and watering hole is the neighborhood hangout of choice for Castleberry Hill residents. Downstairs, at their relatively new underground space known as the 51, it's also a mecca for local jazz and funk musicians. Jam sessions take place most nights of the week, and while many of the regulars know each other well, they're never hesitant to welcome a stranger. 51 Elliott Street S.W. www.elliottstreet.com.

There's usually a cover charge at El Bar, but residencies from some of Atlanta's best DJs validate the cost. The drinks are cheap and the dance floor full. Located in the basement of Poncey-Highlands Mexican restaurant El Ponce, it's one of the smallest bars around and popular with hipsters and hip-hop heads alike so be ready for a crowd. 939 Ponce De Leon Ave N.E. www.elponce.com.

Top tip: Dress like you're going to the jungle humidity is comparable.

NO PHOTOS INSIDE: The infamous Clermont Lounge is (hopefully) reopening soon. | Rebekah Baldwin

The Music Room is far enough down Edgewood Avenue that it's often immune from the outrageous lines and underage patrons that many of the other bars on the street have become synonymous with. Upstairs, there's a shadowy bar with top-shelf liquor and a secret bookcase door to the bathrooms. Downstairs, there's a basement dance floor with a great sound system that books both local and international DJs covering a wide range of genres, including WHINE, WERC Crew's monthly Global Riddims dance parties. 327 Edgewood Ave. www.boomboxatl.com.

Top tip: Upon entering the front door, take the stairs on your left.

A staircase at the corner of Virginia Avenue and N Highland Avenue, the heart of one of Atlanta's oldest neighborhoods, will lead you down into a dimly lit cellar. Highland Tap, a classic American steakhouse, is famous for its prime rib and martinis. The space isn't huge, but it's a cozy choice for whiling away a peaceful evening away from the rest of the world, drink in hand. 1026 North Highland Avenue N.E. www.nightcapfoodandspirits.com/highlandtapmain.

Atlanta's strip clubs are world-renowned and none is more infamous than the Clermont Lounge. Opened in 1965, it is Atlanta's first and longest continually operating strip club. Celebrity sightings are frequent, with regular visits from Bill Murray, Robert De Niro and Morgan Freeman. Mumford & Sons even got kicked out once for violating the "no photos" policy. The place is currently closed for renovations, and has been teasing us with false re-opening announcements and subsequent delays for months now, but once it's back, we'll be ready. 789 Ponce De Leon Ave N.E. www.clermontlounge.net.

Top tip: Resident dancer Blondie is a woman of many talents; ask her for a poem.