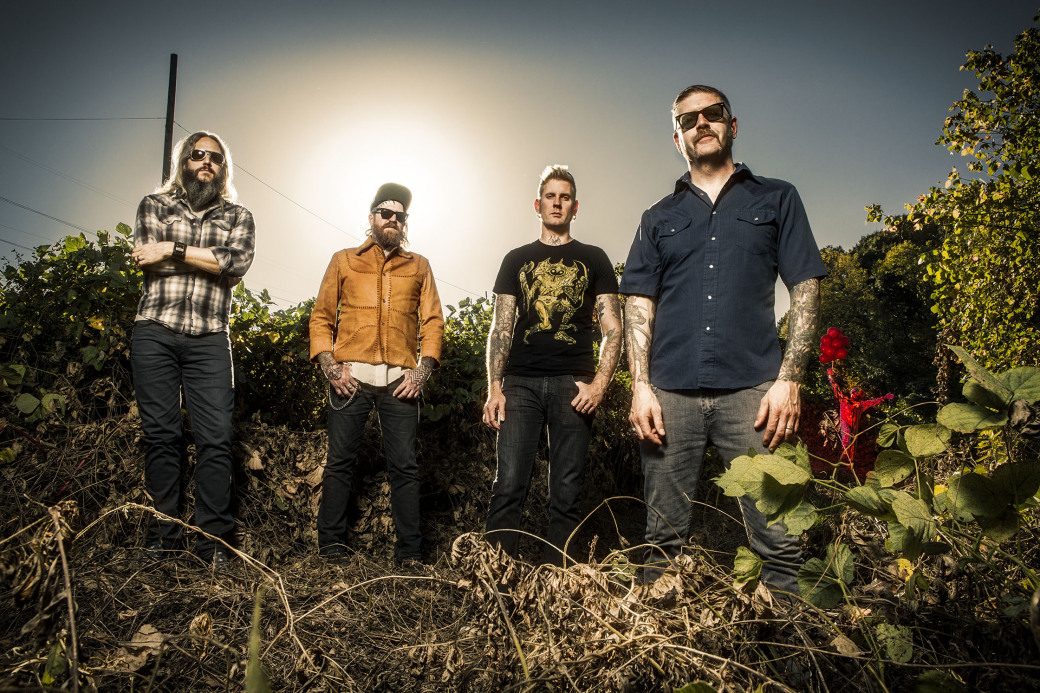 Mastodon plays the Fox Theatre tonight (Fri., Oct. 6). Before the show, singer and guitarist Troy Sanders check in to talk about what defines the group's latest album, Emperor of Sand, and the group's nearly 20-year journey from playing house shows and warehouse to landing on stage at the Fox.

Did you grow up in Atlanta?

I was born and raised in the Stone Mountain area. I went to Shiloh High School, and, as a joke, my best friend put my name in the mix for the senior class government, you know like president and secretary. Surprisingly, I was voted class president. So all these years later I still get a kick out of saying that. It's funny to me, and the only thing I did as class president was organize a battle of the bands. I had seen a battle of the bands at a friend's high school and thought it was the coolest thing ever. Me and a lot of friends were in bands so we were like, "let's do that!"

Did you get good bands to play?

Well there were some cool bands. I knew some of my friends that were in bands and sure enough they gathered, and we made it happen. There were some guys covering the Cure and some covering songs by the Church, and my band at the time was called Mind Jive. We played, and that's my favorite high school memory. Battle of the Bands, setting up a stage in the cafeteria and rocking out with a smoke machine.

Yeah! Mind Jive was a short lived band in high school, and then it turned into Knuckle with Gary Lindsey, and then there was Four Hour Fogger with Brent Hinds, and that turned into Mastodon.

Personally speaking, there's a great arc to follow here: You mentioned Four Hour Fogger. When I was new to Atlanta, a lot of punk, hardcore, and metal bands played at the Parasite House ...

I was there. I remember you playing in Social Infestation, and there was Leach Milk. That was my intro to Atlanta's house show scene. So to have watched you go from playing at the Parasite House to playing the Fox Theater is an epic, triumphant story.

Yes, and it's something I look at with utmost pride. Back then we played any and every show at the C-11 Warehouse, the Parasite, and every dive bar in between ... Over the past 20 years ... ish. We played in apartment kitchens, anything and everything. I am proud, for myself and for all four members of Mastodon for being so driven since day one to keep forging ahead, and sharing the same fire and persistence that we've had since we met in January of 2000.

Do you remember the first show you saw at the Fox Theatre?

Yes, I skipped school to see Ozzy Osbourne's 1992 "No More Tours" show. He was supposedly retiring - no more tours, like "No More Tears.' I was like dude, I'm going to this. I went by myself! I was the first guy in line at Fox all day long. It's funny, that was 1992. Here we are in 2017, and recently, in Louisville, Kentucky, Mastodon played with Ozzy Osbourne. So who's laughing now? ... I guess I'm laughing at myself. But I wanted to see Ozzy before he retired. That was 25 years ago and he's still touring, stronger than ever. Since then, I saw a little band called Pantera open for Skid Row at the Fox. I cried twice when John Prine played, beautiful tears, listening to beautiful songs. I saw Nine Inch Nails there in the early '90s, that was incredible. Lady GaGa, I saw her a few years ago.

There's a song on Emperor of Sand called "Ancient Kingdom,' which feels to me like the album's centerpiece.

It's a song that was written about what we are doing, what we are creating, and why we are doing this. I think of it like ... some things last forever, like, if you can imagine, stumbling upon the remains of a 2,000 year old city. What still stands? That's kind of our take on creating music. We pride ourselves on substance and quality. We are constantly grounding ourselves amid all the touring and all of the time we spend away from home by asking ourselves "are we doing this for the right reasons?' Will this music stand the test of time? Can we channel our personally horrific events that we're dealing with into a beautiful song? Take a negative and turn it into a positive? Will these albums be solid enough to live the shelf life of a music fan? Will people pull out this record in 10, 20, 30 years from now and want to listen to it? All of these things are racked up in this one song. It's my current favorite song to play live because it sums up the last two years of my life coming out of some very dark and horrific moments and feeling like I prevailed. "Ancient Kingdom' validates every ounce of my being and why I go on tour and am missing watching my children grow up, and missing spending a lot of time with my wife. But it's an everyday reminder that me and my guys are in this band for the right reasons.

I hear more of Brann's voice on this record. Do you think his singing changed the way the group wrote these songs?

It happened very naturally, and it goes all the way back to us just doing karaoke at the Star Bar 15 years ago. We always thought Brann had a beautiful, strong voice. He was like 'Great, but I play drums! I can't do that while playing drums.' And, you know, he's an octopus on steroids behind this mountain of a drum kit. But over time he became more comfortable chiming in vocally. It was on Crack the Skye that he became comfortable singing and playing at the same time. Before that, it was only Brent and I sharing vocals, but a third voice in the mix has really opened it up, making what we call our "vocal tag team trio.' Now it's in a place where all three of our voices lend themselves to the part the best voice for the part is what we aim for. Thankfully we're quite selfless: I could write the lyrics but Brent sings them, or any combination like that. It's not like, "I wrote the lyrics, I'm singing them!"

What defines Emperor of Sand for you?

Personally, this record hangs on themes of cancer. My wife was going through cancer treatment while we were writing this record. Brann's mother was diagnosed with lung cancer, and Bill's mother was diagnosed with brain cancer, and she died. This all happened while we were trying to write. So it becomes obvious as we got together every day that we're all feeling somewhat defeated and mentally destroyed. We all want to turn the darkness into light, we want to channel all of these emotions and anger and frustration all the negativity into something we can put on the tape that becomes beautiful and positive, and that lives forever. Bringing it right back to "Ancient Kingdom." To me, that defines it. It was fucking horrific, and I didn't know if this was going to take my wife's life. I didn't know if I was going to be a widowed father or husband and have to quit the band. I knew nothing about cancer except that it was in my wife's body, and it was two years of multiple operations and multiple therapies.

She's cancer free now. She still has side effects, and she's on medication. She's had to deal with shots of radiation, six weeks of chemotherapy, and seven different surgeries. It was fucking horrible, man. All this takes you down to near death, and it was just so painful to watch. I wished it were me. But it could happen to anybody, and it's just horrific. It fueled our everything, hopefully for the better.

All of this fed into the record, as well as my bandmates' stories. I don't want to say it was a total triumph, because it wasn't for Bill. But this record collects our attitude, outlook, and perspective. It has enabled me to become more wholesome, and it's a reminder to use my time wisely.