Quazarz' embodies the radiance and uncertainty of life in America 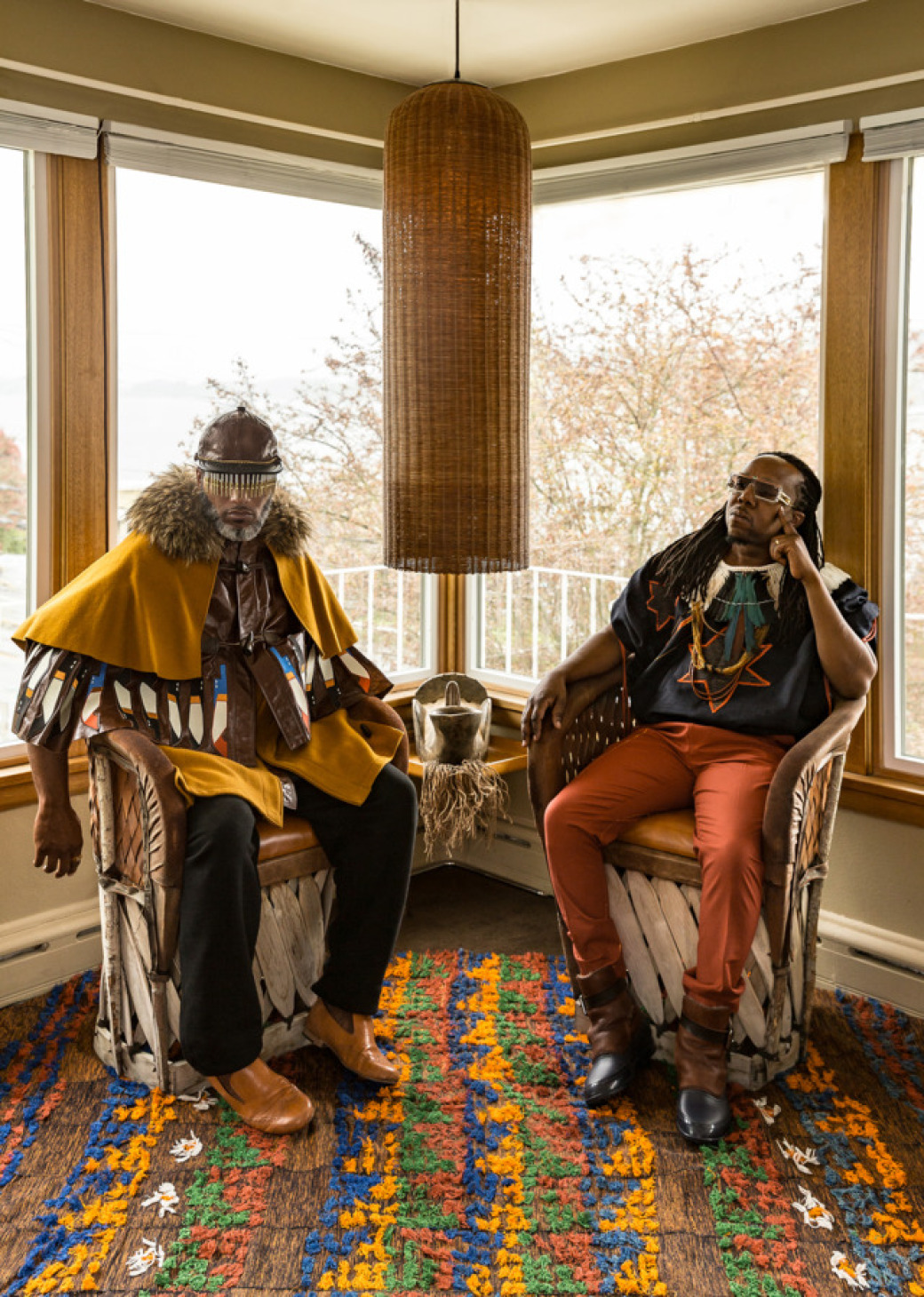 In astronomical terms, a quasar is the brightest object observed in the known universe; a billion times more massive than the Earth's sun. Quasars are among the most mysterious phenomena to occur in space, as each is one driven by the ominous and inescapable gravity of a black hole. For Ishmael Butler, vocalist and founding member of experimental hip-hop duo Shabazz Palaces, quasars also embody an alluring metaphor for all of the fear, uncertainty, alienation, radiance and power of the human mind, each orbiting one another other within the group's latest pair of LPs. Quazarz: Born on a Gangster Star and Quazarz vs. the Jealous Machines, released July 14 on Sub Pop Records, bear the marks of Shabazz Palaces' previous excursions to the mind's outer limits. Butler, aka Palaceer Lazaro, and his musical cohort Tendai Maraire, have long looked deep within themselves to summon dark and lumbering beats. Each of the new albums' songs glide through stream-of-consciousness atmospheres, drifting amid dreamlike textures bound by loops, samples, phantom lyrical cues, and fragments of thoughts woven into lyrics and song titles.

Born on a Gangster Star and Jealous Machines both expand upon the group's already established penchant for the abstract. And while both albums pull away from each other on different musical trajectories, they are forever bound by the dark matter that lies at the heart of Shabazz Palaces' creative drive.

New songs such as "Gorgeous Sleeper Cell" and "30 Clip Extension" from Jealous Machines show off an ever-sharpening musical chemistry brewing between Butler and Maraire as they reach deeper into the remote areas of their shared musical psyche. At the same time, "Shine A Light" from Gangster Star, built around a sample of Dee Dee Sharp's 1965 soul hit "I Really Love You," takes shape as the group's most accessible number yet. And "Moon Whip Quäz," with its blown-out treatment of the synth hook from Kraftwerk's 1978 single "The Model," steps deeper into new realms of structured songwriting for Shabazz Palaces.

Still, Butler and Maraire fixate with a murky ambivalence over how the human mind interphases with technology, the omnipotence of guns in daily life, and the absurdity of modern America's socio-political climate.

These shared, underlying concepts, Butler says, came to him "from somewhere else." He just accepts the cosmos' direction and says he's been riding it ever since. "It's kind of about aliens," Butler says. "When Trump was talking about making America great again by stopping people at the borders, it was basically an attack on anything other than what he called American - anything other than white men. 'All of these funny looking people with their funny languages and funny ways of dressing and thinking ... Nah. We're putting a stop to that.' When you see this race for leadership happening in your country, and you hear this kind of rhetoric, you realize, they're coming for me and my people. Police are killing us and nothing's happening to them. They're terrorizing the black community flexing on us letting us know they're ready to wage war. I started feeling like an alien in my own home."

He goes on to emphasize that the albums' underlying concepts aren't just about being black. "It's about having a sensibility that is communal, that is counter to the notion that money should be the bottom line for every decision, and the notion that we as a country need to reign supreme over everywhere else," Butler says. "Quazarz represented myself, but also a dude who's here from somewhere else - another planet, another state of mind, another realm of being - and he's looking at this shit being like 'wow, man.'"

Among his earliest childhood memories, Butler recalls spending long hours with his father, digesting the interstellar free jazz music, aesthetics, and cryptic philosophies of Sun Ra. The Arkestra's 1966 LP The Nubians of Plutonia was a personal favorite, as was what Butler refers to in conversation as "that Heliocentric shit."

Butler's father, who worked as a history professor at the University of Virginia, had more than a passing interest in Sun Ra's rich avant-garde mythology that drew from science fiction as much as it did from ancient Egyptian culture. "My father really listened to and observed Sun Ra," Butler says. "I participated in listening to the music and looking at those crazy album covers all of my young life. Sun Ra was integral to developing my notions of what music, art, creativity, life, and the narrative of space are," he adds. "People made Sun Ra out as this weird, loopy, extravagant guy who said weird things. But my dad never presented him like that. He took everything Sun Ra said as a fact, and that was our point of departure to consume, digest and exist with that music."

An admission such as this casts new light on Butler's musical output, from the psychedelic beat poetry of his "Rebirth Of Slick (Cool Like Dat)" days rapping with the Digable Planets in the early '90s to the Afro-futurist brainteasers spread across Shabazz Palaces proper debut, 2011's Black Up, and 2014's follow up Lese Majesty.

For Quazarz vs. the Jealous Machines Butler teamed up with producer and engineer Sunny Levine (Pete Yorn, Ariel Pink's Haunted Graffiti, Ry Cooder). Butler worked in Seattle at Protect and Exalt Labs: A Black Space, and traveled to Marina Del Rey to work with Levine at Dror Lord Studios to produce a more cohesive Shabazz Palaces album. "I record my stuff on my own and then we go into the studio and run it through boxes and make it sound the way it does," Butler says. "We would go into the studio for like eight and nine days. I'd come back home, go on tours and do this and that. It was just a longer, more protracted recording and mixing experience. That's why it feels the way it does."

Quazarz: Born On A Gangster Star, on the other hand, feels like a more open-ended album. Butler and longtime cohort Erik Blood worked at a more leisurely pace at Protect and Exalt, under the name Knife Knights. "I can basically tell what he's thinking and vice versa," Butler says. "We didn't think we were doing an album. I thought I'd have maybe four songs to do different shit during the life of vs. the Jealous Machines, but it went so fast. Then 'Shine a Light' was on there. Then 'Since C.A.Y.A.' was on there, and people really responded to those songs."

Sub Pop was behind the project and Born on a Gangster Star was born. The idea, however, that Butler conceived and executed a cohesive plan that he saw through from start to finish is something he wholly rejects.

Despite the albums' similarities shared themes, recurring motifs and simultaneous release, again, Butler says it all came from the stars.

Just as the human mind contains emotion, logic and spiraling creativity, quasars are comprised of black holes, unknown space, distance and depth. "There's hella energy and hella spaces that are unknown that you may end up tripping into," Butler says. "Quasars are also the farthest thing we're able to see in the galaxy. That seems like when you're thinking about who you are, it's a distance you have to travel to get there. All of those characteristic parallels, to me, describe almost every human being on the planet. And these albums are just now beginning to define themselves," he adds. It won't be me that discovers them as much as it'll be other people listening and critiquing and finding their own meanings that I never would have come up with had I tried. You know what I mean?"