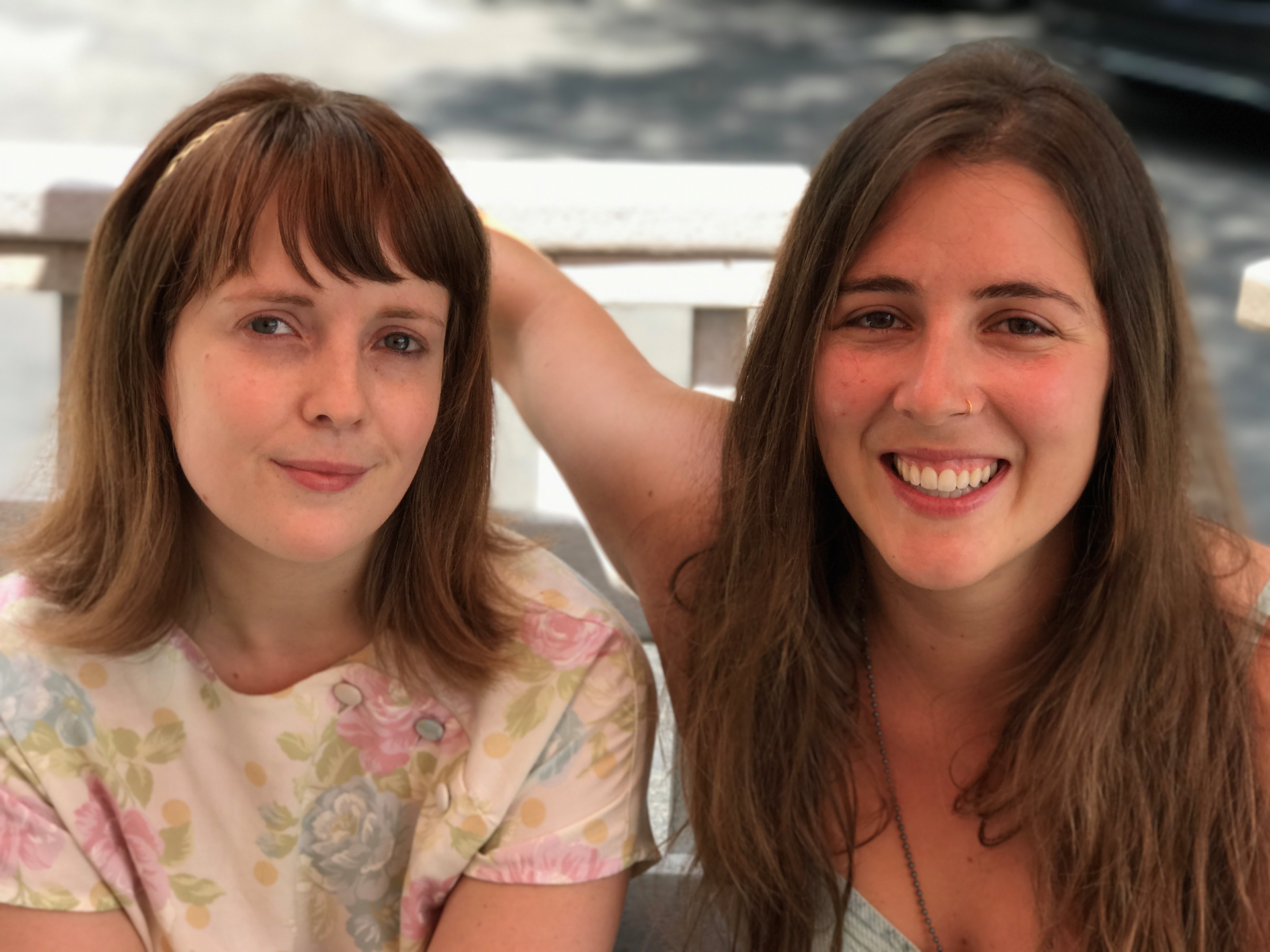 Adron and Casey Hood share a long and winding history together. On a balmy summer afternoon, while preparing to share the stage at Eddie's Attic on June 21, they both took turns talking about how they met, their preferred guitar strings, and their respective places in Atlanta's musical landscape.

How did you two first meet?

Casey Hood: It's funny. We didn't even meet in Georgia. We met in California. Adron was at Scripps College, the all-women school, which was next to where I was going to school at Pitzer on Claremont, California. One of my best friends at school was obsessed with her. So we were like, let's look into her. Find out about her.

Adron: He was my boyfriend after a while, and there was no interim period. He just waltzed up to me with his fat, weird, classical guitar and started diddling it with his crazy hippie claws. I was like "Okayyyy."

CH: He didn't know you were a musician, but I found out you were from Georgia and made music. I used to go see her at the Motley Coffee shop out there. We were 18 years old.

Was this before your first Adron album came out?

Adron: It was right before. It was back when I was writing songs like "Airplanes." Then I quit school and came back to Atlanta where I met Meshakai Wolf and Johnny La Rocha who produced my first record.

Casey, tell me about your new album, Undone.

Casey Hood: I didn't even know that I was going to make this album. Jared Pepper who was in Lilly and the Tigers with me, has the Broad Street Visitors Center now. He invited me to the studio to record what I have. I didn't think I had much but he urged me to come by. I went there in late January and started laying down tracks. I forgot how fun it is to be in the studio, and we got going with it and I thought, maybe I do have enough for an album.

The title kind of comes from me coming out of the band, Lily and the Tigers, and changes in my life that were happening all at once. I felt like I wanted everything to undone everything fell apart in a good way. A lot of good came out of it.

When I was writing with the band there was a sense that I needed to stick with this type of music. But with these solo songs, I never intended to record them, so there is a lot of freedom in the style. The country, Americana elements are part of it, but every track has a different sound.

What do you have in the works, Adron?

Adron: I have had a new album coming together for years. I'm still writing like crazy. A lot of what I play at shows now is two or three albums into the future. I've been sitting on this one called Water Music, which is basically finished, but I'm still trying to find the right situation as far as releasing it. This speaks to my struggle with the way that the music industry works now. I hope I'm not out of line saying this, but the album is so freaking good that I can't just put it out by myself at random without support or distribution. It has too many world class players, people who are so stinking amazing that it would do it and them a disservice to just fart it out with no support behind it. I'm trying to find the right support so I can get everybody paid, and get my producer, Marty Kearns, compensated for his work.

It's becoming a little bit of a thorn in my side, and I feel like being honest about what a struggle it has been. I'm almost at the point where I might just say screw it and put it out. I need to move forward. But the new new stuff, I'm so excited about, and I love the new songs, and I don't care if people want to hear something else, I'm like "No, you're going to get this, and it's going to be good, I promise!" (laughs).

Do you feel like your inspiration is your incarceration?

Adron: That's so true that it hurts.

Organismo was your last proper release, which you handled yourself in 2011. What did you learn from that experience?

Adron: It had a good local run, and got accolades, and people seem to still dig it. Compared to where I am now, Organismo is like larval stage. And even Water Music is still kind of a chrysalis stage. Now I feel like I really get what I'm going for. My '70s soul education has crystalized with Brazil education.

Is there one song that you're going to play at Eddie's Attic that you think of as your thesis for where you are now?

Adron: There are two. One is more in the Brazilian territory, and the other one is more in the soul territory. The Brazilian one is called called "It Could Be Weird." It's sung in English but the rhythm of the guitar part that I wrote for it the right hand articulation is pretty much plagiarized from Caetano Veloso. I took this rhythmic pattern ... I don't know if it's his thing or just a Brazilian pattern. It has a slow, mellow groove to it.

The more soulful mellow one is called "Low Key." They're both super mellow and super duper romantic. Ballads.

Adron: Yeah. A lot of material comes out of me being single for the past two years, which was not the case for a long time. I've been through some personal transformations that were rocky but good. Me and Colin Agnew, the drummer extraordinaire, were in a relationship for five years. That ended a few years ago. We're still friends. He's still in my band, and he's my number one homie.

Adron: I consider the evolution of our relationship to be one of the greatest triumphs of my adulthood. The ability to move through these phases with somebody that you're so close with, and there's so much riding on that closeness that it could be really dangerous, but you both grow through it together and stay strong. It's easy to get tangled up in drama, but I was lucky that Colin is like the strongest dude in the universe. And I put him through a lot. But yeah, I've been having romance and adventures, and getting my feelings messed with in interesting ways.

It's good for the songwriting.

How about you, Casey do you have a song in your set list that you think of as the song for you right now?

CH: Probably the title track from the new album Undone. I have to do it in the beginning because it opens me up for the show. I know it will bring all of my emotions to the front. "Saturn's Return" is another one.

CH: Yeah, a lot of the inspiration behind the album is like Saturn's return, when you turn 28-29 and you question everything in your life. That's the astrological term for it. That year just rocked me. A very transformative time.

Do you have any pre-show rituals that you do?

CH: On my ride to the show I run my voice through all of the weirdest sounds. I ride along, usually, and I must sound like a crazy person. I put my voice through everything. And I like to take a moment to myself, just to feel centered. Sometimes I take my shoes off, if it's the right kind of show. I prefer to play barefoot.

Adron: I just sort of get real quiet. I don't know if there's particularly anything that I do ritualistically, but I get quiet and my bandmates ask if everything's ok. It's sort of like I'm sucking in energy to release in a blast later. But I'll just isolate a little bit. It's not even something I'm aware of. It just sort of happens. I'm the same way with practice and writing songs. It's all haphazard, and I don't think about it too hard. I don't set aside time or habits. It always just kind of surprises me: "Oh, now this is happening." It's how I keep from overthinking things and getting nervous.

CH: I use steel strings when I perform, but I write everything on a nylon-stringed guitar that I've had since 6th grade. The non-nylon stringed guitar is a much nicer guitar with an input. The other one has followed me like an old friend. There's something really warm about it. And my other guitar is always in a case. This one is just lying around, next to my bed or wherever.

Do you think the kind of strings you use has affected the evolution of your voice and songwriting?

Adron: I'm not sure if I can process that question. I have always played on nylon strings and my voice has developed along with that. It's interesting to consider how the two may have affected each another and informed how I grew my voice, but I don't know.

CH: The guitar that I play is a Taylor Acoustic Electric. When I was recording I remember asking Jared if the guitar sounded too happy, or too bright. He said no, your voice is very dark and it balances it out well.

Adron: In the last three-four years I've started getting way more into '70s R&B stuff. With someone like Bill Withers, there's a jangly, steel string thrift store guitar chunking along. And it just feels so good and so right for that kind of song, even though everything else is so smooth and crisp in the mix. That's something I've wondered about trying to learn how to write on an acoustic guitar, being less compositionally overbearing than I tend to be just do something really straightforward on a steel string acoustic guitar. Then see how smooth and articulate I can get on top of that later in the studio. And also, I keep wanting to get good at an electric guitar and start shredding a little bit. But there's a little bit of an inhibition there because I'm so much more comfortable on nylon strings.

As soon as I get into electric guitar, though, I'll start spending all of my money on effects pedals. That's a deep dark hole that I don't know if I'm ready for yet.