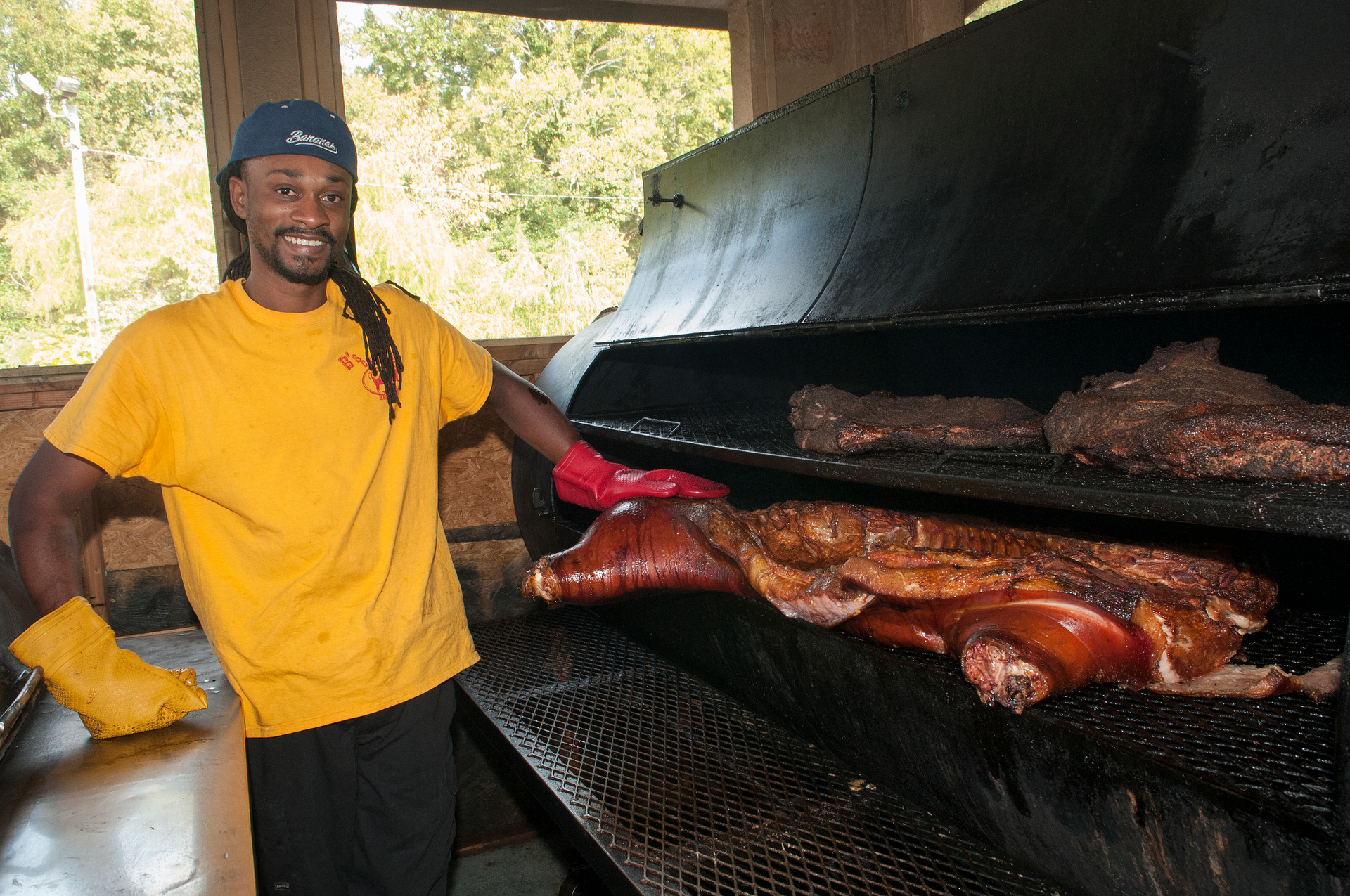 Photo credit:
B’s Cracklin’ BBQ is different than other Atlanta barbecue joints, and you can thank owner/pitmaster Bryan Furman’s South Carolina family for that. The former welder dreamed of opening a barbecue joint that would carry forward the joys of his grandparents’ homemade barbecue, but it was Furman’s father who really pushed him – asking, how will you be different from everyone else?

For Furman, the answer arrived in the form of heritage hogs. He had watched Andrew Zimmern talking on the Travel Channel about the beauty of Ossabaw Island hogs and realized that starting with better hogs would mean better – and different – barbecue than other joints were putting out.

Winning awards in Savannah since 2014 (B’s was recently named one of Thrillist’s 33 best BBQ joints in America), the restaurant just opened its second location in Atlanta last month, taking over a homey spot in Riverside that once belonged to Hottie Hawg’s. When you drive up to the parking lot in back, right by the enclosed smoker, the heavenly smell of smoking meats emanates like a choir of angels rejoicing.

Once you’re inside, B’s offers a refreshingly bare environment compared to many of the high-profile barbecue joints that have opened in town over the past few years. None of the costly reclaimed wood or retro neon signs meant to signal authenticity; just quality food. For Furman, quality means locally raised heritage hogs slow smoked over oak and cherry wood, sides made from scratch and cutting, chopping, and frying whatever he can to order. You’ll notice some highly unique items on the menu board overhead, from the pork skins appetizer ($3, freshly fried and cracklin’ like crazy), to hash with rice.

Hash with rice is common in the Carolinas but seldom seen in these parts. Furman starts his with (sorry, PETA-supporters, you may want to skip this paragraph) the heads of heritage hogs. “I take the hog’s head, split it in half, boil it down, grind it in a sausage grinder with some smoked shoulder and burnt ends,” he explains. “It’s like a meat gravy. The Berkshire heads are really fatty, and more fat means more flavor. I try not to duplicate anyone else’s style.” It’s a refreshing departure from ever-present Brunswick stew and likely to keep fans coming back to B's.

No value assignedBeyond the featured whole hog plate ($11 for a lunch portion with two sides and B’s special griddle cornbread), there are ribs ($14), brisket smoked simply with salt and pepper ($14), chicken ($11), and a few different sampler plates – which are a great way to go if you want to try all that B’s can do. For me, the golden-hued chicken was the surprise hit of the bunch: richly imbued with smoke, nicely seasoned with B’s dry rub, and completely addictive. The brisket features a perfect pink smoke ring and goes nicely with a quick dip in B’s spicy vinegar sauce.

Furman insists his approach is unlike other Carolina-inspired joints. “It’s more my personal style," he says. "I just do it my way. My brisket is just salt and pepper, like I’d season a steak. My pork, I don’t vinegar-baste like most Carolina-style places do, so it tastes a little different. The only thing that’s Carolina about me is our mustard sauce.”

Even Furman’s sauce, though, is unique: a Georgia-tinged version of a Carolina classic. The Georgia accent comes from peaches, which bring a thick consistency, natural sweetness, and a bright sunset-orange color. The “Carolina’s Finest” sandwich ($10 with one side), generously sauced and piled with coleslaw, is a good way to try it. When you order at the counter, ask if they’ll add some of the chopped crunchy cracklins that each hog provides. The extra crunch balances out the tender, lightly smoky pork. You can also get sandwiches featuring the ribs, brisket, or chicken.

No value assignedAs for those made-from-scratch sides, B’s does the hash, typical mac and cheese, beans, slaw, fries, and fantastically rich collard greens. Furman won’t divulge his recipe, but does admit he uses butter, turkey instead of pork, and a spice he assures me is not usually found in Southern barbecue joints.

As B’s settles in, look for a cracklin-studded version of their cornbread, like they do in Savannah, fried pickles and okra, as well as beer and liquor once the license comes through. Furman is even considering breakfast service, including homemade biscuits. An instantly destination-worthy barbecue joint, B’s warrants a trip to Riverside no matter what part of town you’re starting off in. You’re simply not going to find another barbecue joint like it in Atlanta.