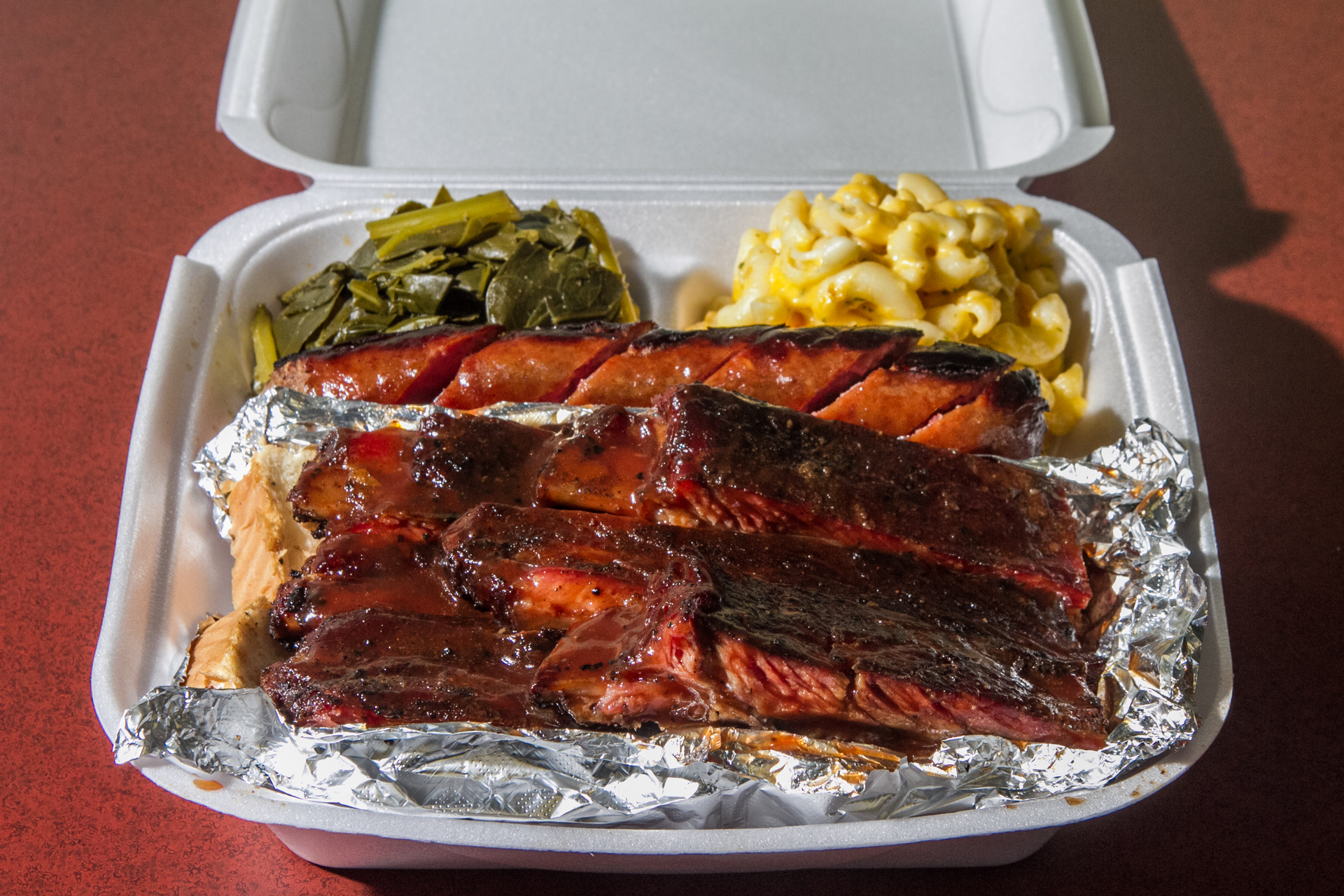 Photo credit:
Soul food in a strip mall is a familiar site if you grew up in the South. There’s nothing more comforting than no-fuss cuisine that tastes like it came from grandma’s kitchen. Open since March in Brockett Plaza off Highway 78 in Clarkston, Gator’s BBQ & Soul Food will warm your belly with the intense flavors of Southern home cooking.

Grandma’s hands: “Gator” refers to master griller and owner Trae Pass’ nickname. Born and raised in Atlanta, Pass cooks the food his mama and grandma taught him. Once a corrections officer, he always dreamed of opening a place in which to display his numerous BBQ competition trophies. Expanding his catering business into a restaurant was a leap of faith. Today, he not only uses his grandma’s handed-down recipes, but often invites her into the kitchen to help out, along with his mother and his wife, Devin.

Check the chalkboard: There is no set menu at Gator’s. Offerings, written on a large chalkboard, change daily. Pick a meat and two sides with a drink for $9.99-$12.99 or go for an all-vegetable plate. For protein, you might find pork ribs, baked chicken, turkey ribs, oxtails, liver and onions, beef brisket, Polish sausage links, or pulled lamb, depending on the day. Pass smokes the meat daily, right out back in the parking lot over local cherry wood.

Chow line: Service is super friendly and patient. Much like an ice cream shop, they even offer samples. Start your trip down the steam table with a heaping portion of protein. Pork ribs with dry rub were meaty and tender with a slight sweetness imparted by cherry smoke; get three on a sandwich for $7.99. Beef liver smothered in onions was soft and mellowed by a long braise in gravy over yellow rice. Turkey ribs were a great lighter choice. Baked chicken was uber-rich in flavor and markedly juicy, its roasted skin sprinkled with spices. Baked beans swam in a thick smoky sauce with bits of pork.

Veg-friendly: The rest of the sides contain no meat products. Mac and cheese was tangy and super creamy with crusty melted cheese on top. Garlicky green beans were on the soft side, Southern style, but not quite mushy. Collards chopped into small pieces melted in a vinegary and seasoned braise. I left with my takeout containers heavy and piled high with Southern grub, and two of them were enough for dinner and lunch the following day.