Put a bling on it

Atlanta is a key player in the nail art scene, and the women who wear it carry tiny canvases all over our city 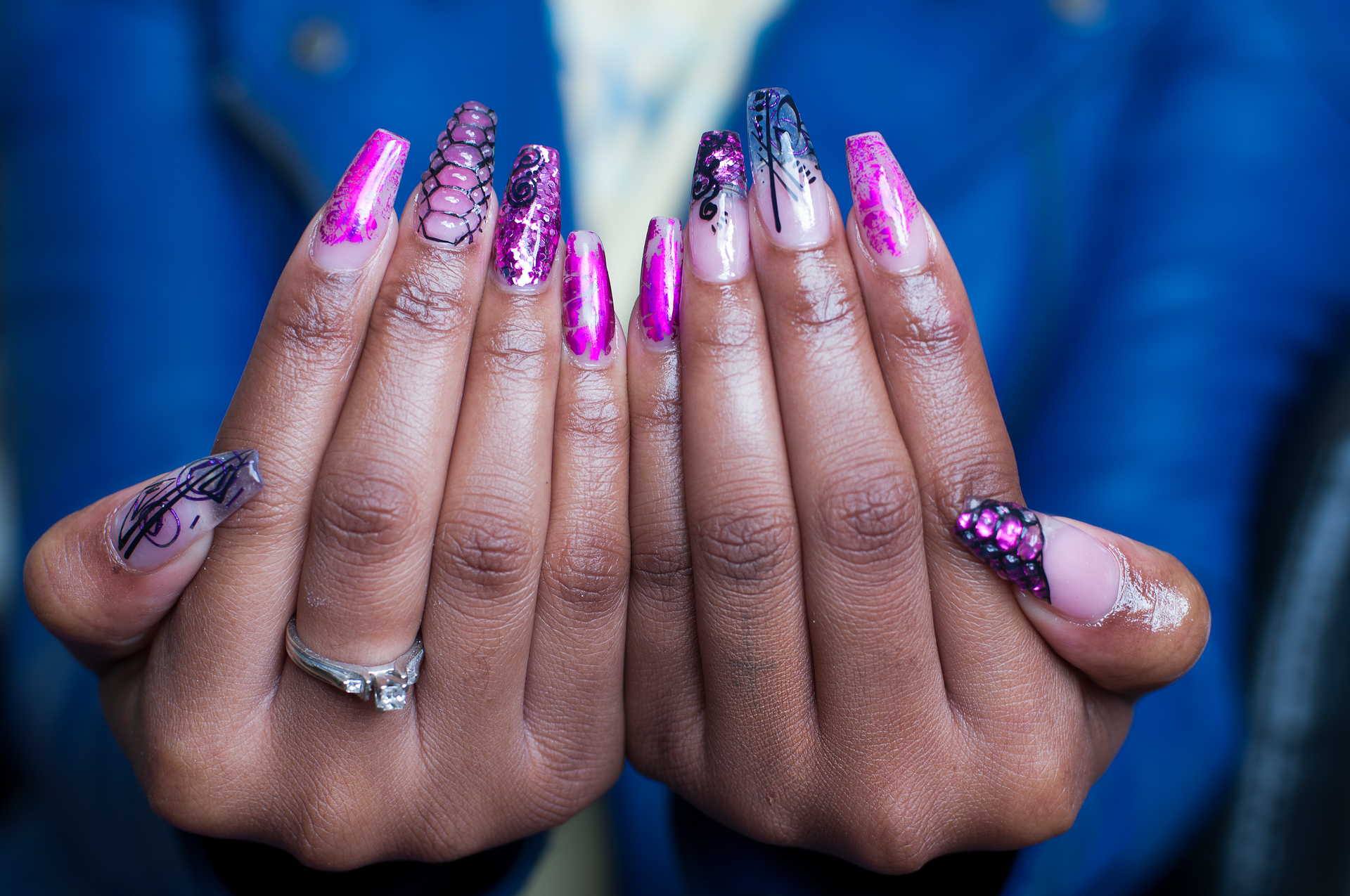 Photo credit:
Off Campbellton Road in southwest Atlanta sits Maxwell Crossing, a modest brick-and-stone shopping strip housing a hair salon, chiropractic office, discount meat shop, and Poochiez Pawz Nail Studio, arguably the premier nail art destination in the city. Locals drive and out-of-towners fly for appointments with owner Tashina “Poochie” Green Robinson, Atlanta’s “godmother of nails.” Poochie’s work consists of anything from hand-painted designs to clusters of rhinestones, and from elaborate sculptures to her trademark polka dots: perfect circles that decrease in size until they fade into the nail.

Nail art isn’t just for prisses who tote poodles in mini backpacks. Thanks to tastemakers like Beyoncé, Selena Gomez, and Zooey Deschanel along with social media sites that highlight celebrity trends, finger bling is more mainstream than ever. Atlanta has become a key player in the nail art industry over the past several years, and its enthusiasts hail from diverse ethnicities and professions. The canvases clients carry on their hands may be miniature, but they are crucial to the city’s sense of style.

No value assignedNail art is as personal as fashion gets. “Your nails can be customized on a weekly basis and reflect however you’re feeling,” Myka Harris, proprietor of WAX Atlanta’s BUFF Nail Bar, says. “You can’t go into Bloomingdale’s and walk out with a shirt you just envisioned, but you can do that with your nails.” Alayna Hoang, owner of Nouvelle Nail Spa, has painted jack-o’-lanterns and spiderwebs for a Halloween enthusiast and a gestating baby’s name for an expectant mother. She sculpted a 3-D vagina on a local comedian’s middle finger, while a chain, Guy Fawkes mask, flag patterns, and solid gold paint adorned her remaining nails.

In addition to fashion for fashion’s sake, nail art can express one’s stance on social issues, particularly in the LGBTQ community. For a customer attending this year’s Atlanta Pride Parade, Hoang painted “No H8” on one index finger as well as side-by-side female gender symbols. (Accent nails — one or two nails on each hand that intentionally stand out from the rest — actually originated in the gay community so women could signify their interest in the same sex.)

Johnson’s work also has promoted social movements. A breast cancer awareness nail set included pink ribbons, a hand-painted bird finger amongst the text “fuck,” and the word “cancer” behind the universal no sign. A Black Lives Matter piece contained a black, white, and gray gradient effect she achieved with a sponge beneath the slogan. Well before Allure magazine published an image of a Hillary Clinton supporter’s politically charged pointers last fall, Johnson imitated a watercolor background with neon yellow, pink, and blue Sharpie markers on an Obama-themed nail incorporating the President’s name.

No value assignedNail art doesn’t have to be in-your-face. In fact, muted colors and patterns were nail art gateways for many BUFF patrons. “People weren’t receptive to it in general when we opened in 2012,” Harris says.

Particularly in the ‘90s, nail art’s reputation as exclusively combining gnarly shapes and garish colors created the false impression that it was, as Harris puts it, “ghetto fabulous.” Society at large assumed nail art belonged solely to African-American culture despite its global roots. As early as 5,000 B.C., Egyptian women dyed their nails with henna. During the Ming dynasty, women used nail extensions to communicate their social status; only short-clawed commoners engaged in manual labor. Yet, the modern-day stereotype partially makes sense. Track and field star Flo-Jo famously donned glitzy talons at Atlanta’s 1996 Olympics, while hip-hop artist Missy Elliott popularized airbrushed and pierced nails during said decade. But when nail art hit the Louis Vuitton runway in 2007, its accessibility opened to everyone. “Once it was presented in another context, people thought, ‘That’s not so far away from me,’” Harris says.

No value assignedSome early nail art adopters equate Caucasians’ sudden interest in finger bling with cultural appropriation. A Reddit thread ("white girls painting nails is stealing culture") broached the subject with mixed reactions. Harris thinks it’s a non-issue. “My clients are super diverse and don’t see nail art as being gentrified,” she says. “They are experiencing it right now as the rest of the world is.”

The only prejudice that seems to linger in Atlanta involves not who is wearing nail art but who is producing it. “People call and ask if this is a black nail salon,” Hoang says. “I don’t understand why that would matter.” Regardless, she is well aware of the more prevalent generalization that only Asian women administer manicures. “Just because a higher percentage of Asians does nails doesn’t mean other ethnicities aren’t equally capable,” Hoang says. “It depends on the individual.”

Beyond what ethnic group “owns” it, another annoying stigma surrounds nail art: Women become onyxologists (aka nail technicians) because they aren’t smart enough to pursue a “real job.” However, cosmetology programs involve expensive and time-consuming training just like other careers that unfairly may be held in higher regard. “A family member once asked me, ‘As intelligent as you are, why nails?’,” Johnson says. “That question really shook me.”

No value assignedBecause of these negative misconceptions, people tend to want to pay as little as possible for manicures. “Stigmas lead us as society to price services the way we do,” Harris says. A modest nail set costs anywhere from $40-$60, but that consumes an hour and a half. Once the salon takes a cut and booth rental fees are tendered, the typical onyxlogist’s take-home pay is minimal. (NAILS magazine listed a nail tech’s average income at $630 per week in its latest industry report.) A New Year’s manicure offered at BUFF featured little Swarovski crystals and ran $135, but that was for a special occasion and geared toward clientele who could afford to splurge. “If we treated nail art as a valuable service, people could make a better living at it,” Harris says.

In addition to completing the schooling necessary to obtain licensure, nail techs feed off of each other to stay on top of fads. From 2010 until her place of employment burned down in 2012, Johnson and her colleagues shared tips and inspiration at Tiny’s Nail Bar, a legendary tourist attraction owned by rapper T.I.’s wife. At Tiny’s, Johnson first experimented with the intricate paints she now is known for. In 2013, she joined the Poochiez Pawz team.

Poochie insists nail techs have the power to shape trends, which makes sense per her Instagram account’s 166,000 followers. In 2012, she launched Poochiez Nails, a global product line including her own nail brushes, pigments, chrome powders, and press-on stickers called Quick Sticks. She releases each pattern in limited batches. “Once I sell out, I move on to the next look,” she says. The latest design, which hit the market earlier this month, contains icons from 100-dollar bills.

No value assignedAlthough nail techs defer to Poochie for the hottest style or product, she is most passionate about the flawless foundation on which any nail set should stand. After all, the shiniest gem or raddest sticker can’t mask an inferior paint job. “I don’t like to see bumps and lumps,” she says. “It needs to look really smooth, and the art just adds that pop to it.” Poochie shares one tactic that enables perfect application of acrylic color: aiming the hand downward while brushing from the middle so as not to “look too wide or heavy on the sides.”

People like Poochie keep Atlanta on the global nail art map by traveling to overseas industry meccas and bringing what they see to their own shops. She is in Hong Kong this week for Cosmoprof Asia, the beauty business’ leading trade show. Hoang not only has made a pilgrimage there but also is in the process of importing a special opaque gel from Tokyo that currently can’t be found in the U.S. Johnson visited New York City to take a class from respected artist Vanessa Nails.

No value assignedConversely, social media has transformed the trade with easy-to-access how-to videos. “When a client asks for a design and I’m not quite sure of the technique, I can YouTube it to see how others do it and try to perfect it,” Hoang says. With the prevalence of free online instruction and opportunities to DIY, the point of investing in a professional manicure could be questioned. Consider a hairdresser who reshapes limp tresses with the twitch of a scissor or delivers a wedding style a bride never could recreate on her own. It appears effortless but requires expertise. The same goes for Hoang’s mastery of the craft. Plus, nobody can argue that a salon manicure lasts a lot longer than one attempted at home.

At one time, fashion-conscious women felt pulled together as long as the following were well-kept: hair, skin, and brows. Any passionate onyxologist will contend nails also have crept into that picture. “Your outfit isn’t complete without nail art,” Poochie says. “That’s just it.”

Spider for Put a bling on it