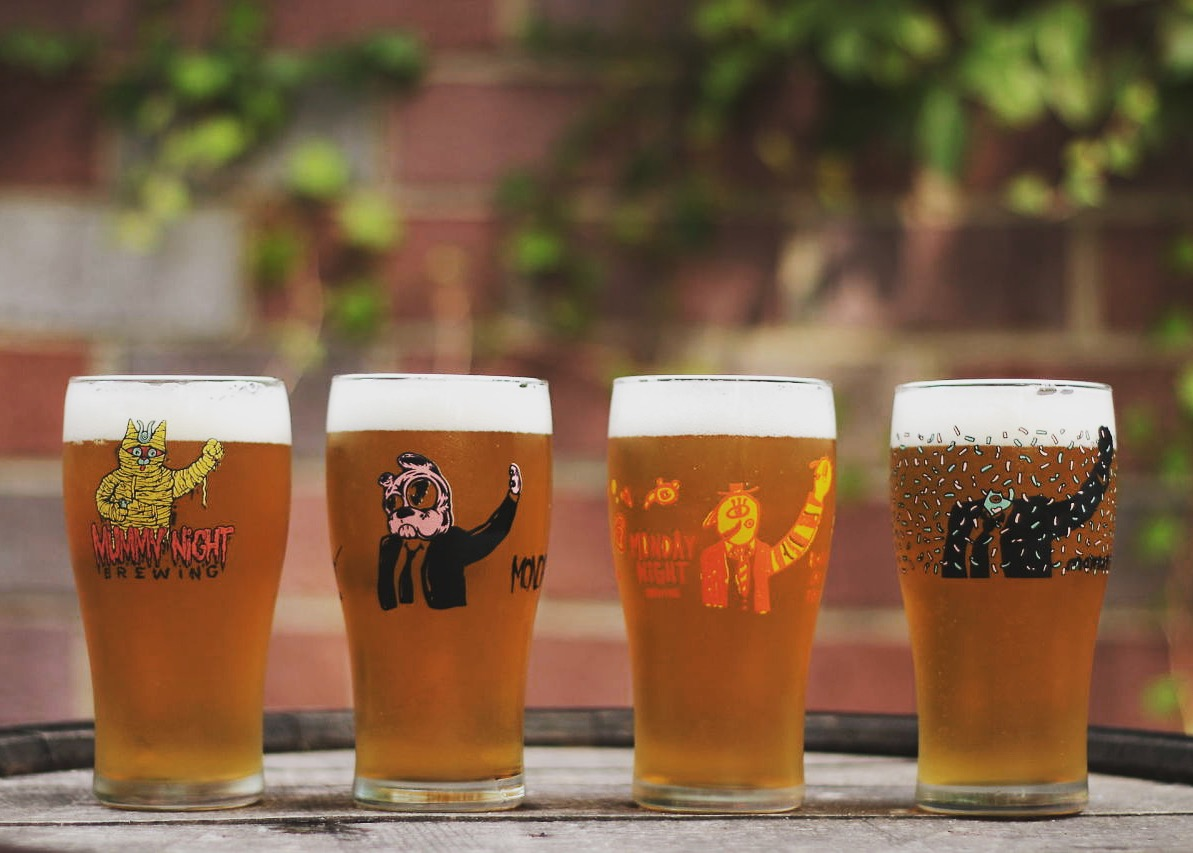 Pop culture adores the narrative of the alcoholic creator — it’s no secret the creatively-inclined enjoy beer. What might come as a little more of a shocker is that beer is just as big a fan of artists. Atlanta’s thriving craft beer scene is a big supporter of the city’s equally prominent art community.

Breweries are reaching out to local artists for help with logos, advertisements, and other visual content. A CatLanta icon raises its fist (paw?) in the air on one of the pint glasses Monday Night Brewing hired local artists to reimagine its logo for (pictured above). Orpheus Brewing hosts live painting events where staples of the Atlanta art community like Forward Warrior-founder Peter Ferrari paint large canvases available for purchase in their tasting room. Eventide Brewing’s pop-up market gives craftsmen a chance to share their stuff with a new audience. Second Self has been working with Georgia State and the Creative Circus to offer print and digital marketing classes. At the end of the course, Second Self co-founder Jason Santamaria will choose his favorites of the class’s designs for company use.

“I believe in specialists. I know how to make great beer, but I don’t know how to draw,” Santamaria tells CL. “It’s great to be able to draw on the great amount of talent in the city and create something that is creative and unique to the beer on the design side.”

It’s a symbiotic relationship. Artists get the opportunity to design cool labels for use by their favorite alcoholic beverages — and, of course, get paid. Breweries get eye-catching content that reminds people of home and provides their beers with an artistic edge that sets them apart on the shelf. After all, people taste with their eyes first. Both parties get to cross-pollinate their social media platforms and reach new audiences. After posting pictures of the cartoon-inspired mural Atlanta artist sQuishiepuss designed for the Monday Night Brewing office, he started to receive requests specifically for superhero art.

“Any time you see different local brands working together — and you could argue that an artist is a brand as much as a beer is a brand — I think people see these relationships,” Monday Night Brewing marketing guru Jonathan Baker says. “Those brands then become more personable, more a part of the city, and then more a part of who people associate themselves with.”

Because the partnership is founded on a personal relationship, artists are often given an extensive amount of creative control. Orpheus Brewing gifts the designer chosen to do the artwork for their cans with a brief on the themes considered when brewing the beer, the reasoning behind the beer’s name, and some example pieces of the artist’s own work that the brewers felt fit the artistic vision they want for the can. Artists are then allowed to do as they please.

“I hire them because I trust their vision, and I tell them that,” says Orpheus brewmaster Jason Pellett, “We are giving up control here, purposely, which is kind of scary.”

Finding the right artist for a particular project becomes imperative. Oftentimes connections are formed through more personal means than one might expect from a work partnership. Eventide hired an artist to design merchandise for them who held his wedding in their fledgling space. Pellet taught sketch artist Sam Parker’s son trumpet lessons before eventually hiring the artist to handle the brewery’s visuals. Second Self saw Patrick Nguyen doodling on a napkin in a restaurant and pegged him to design a mural for the brewery. Other artists were found through Instagram searches, attending art galleries, and noticing the street art Atlanta has started to become famous for.

For many of the breweries, it offers a chance to give back to a community. Beer is art, after all, and the uncertainty that often plagues artists is familiar to brewers.

“I want to support local people because they supported me,” Santamaria says. “I’m living my dream, and I want to help other people live theirs.”

The craft beer-local artist union has other advantages, too — mainly helping to create a brand for Atlanta itself. Atlanta is becoming both a recognizable beer and art city. It’s hard not to feel very Georgian when chugging a Nerd Alert out of a glass embellished with one of R. Land’s signature cartoon creations.