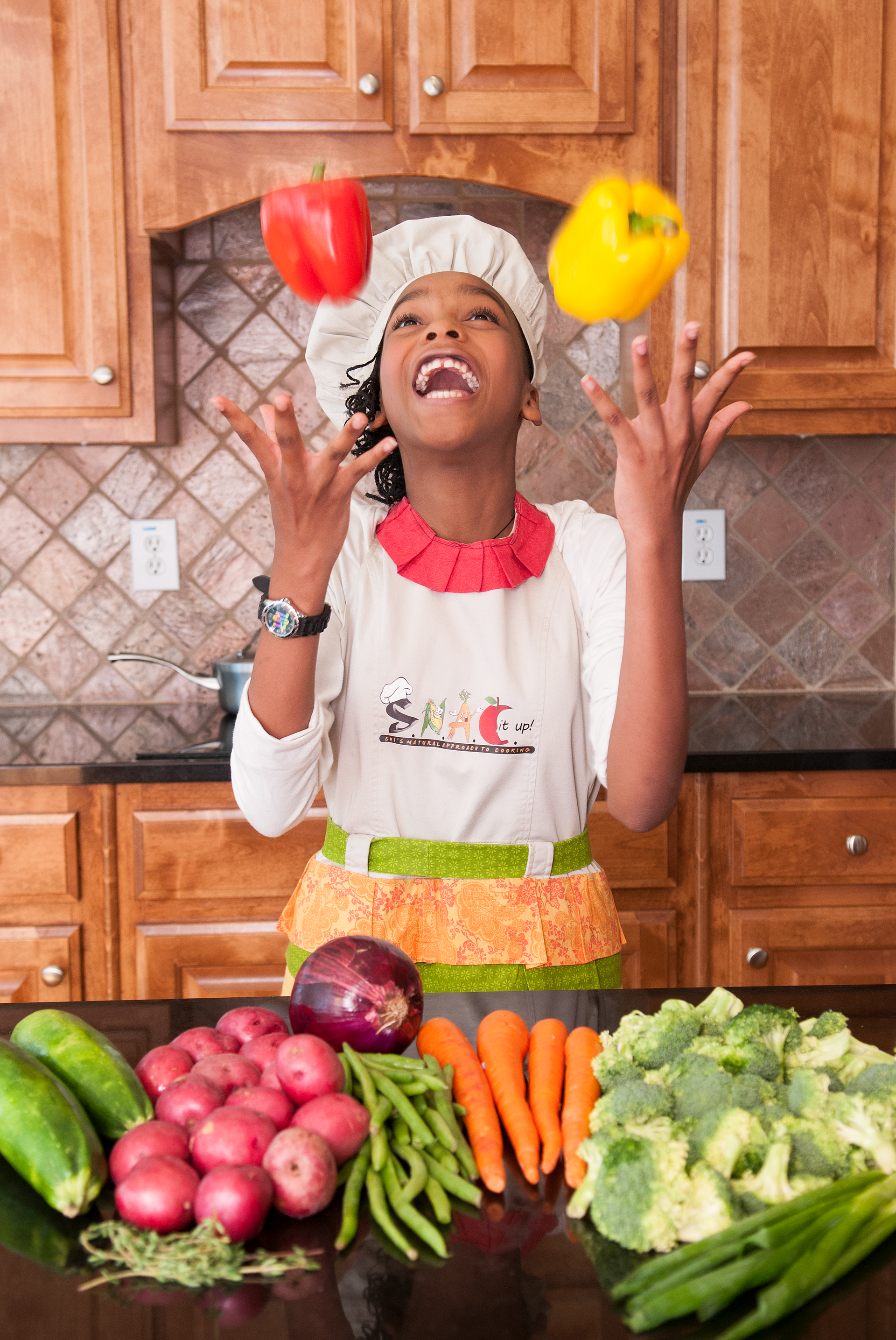 Photo credit:
On a recent Wednesday night in Stone Mountain, Shiona “Shi” Curry cooks dinner for her family, like she does three times a week. She meticulously sprinkles seasoning, scoops steaming heaps of jasmine rice, and places stalks of asparagus until the plates look as if they were ordered from a restaurant.Curry is only 12 but has already been cooking half her life. Though she is vegan, the self-described rebellious middle child developed an early fascination with chefs of all sorts. “I always found happiness in watching cooking shows and preparing foods, so that’s what I did,” says Curry, whose favorite dish to make is vegetarian pomegranate chicken. “My mom and dad saw this and began to support me by buying ingredients and later helping me start my business.”Curry’s mom, Celeste, recalls those early family dinners: “She would have to take hers and set it up a particular way. She would plate it.” Curry watched Mom cook and combined family recipes with what she saw chefs make on TV. Her family used to question her adventurous ingredients; now, they look forward to her Jamaican-Asian stir-fry and vegan pizza muffins. “A lot of parents say they can’t get their children to eat asparagus, but my friends love my asparagus,” Curry says.Curry has amassed a loyal adult following. One of her dishes was featured for a day last year at Buckhead’s Café Sunflower and sold out in two hours. At Atlanta’s Vegan Food and Tea Festival, she impressed crowds with a live demo of her raw carob Almond Joy bars. In June, she released S.N.A.C. it up!, her first cookbook. This past October she gave a copy to President Obama, who was on a campaign stop. “I didn’t write my first book until I was 33 years old!” he replied.Through her S.N.A.C. it up! company — it stands for Shi’s Natural Approach to Cooking — Curry inspires kids to eat right and feel good about themselves through workshops, cookbooks, and DVDs she produces in her home kitchen.Each episode in her healthy cooking for schools DVD includes a positive affirmation, a character theme, and an exercise. “My goal to combat childhood obesity and diabetes is to train them, showing them how to work their mind, body, and spirit,” she says.This year, Curry is looking to build her brand through television, radio, and social media, letting her peers know “this is the same body that they will have as an adult and show them how to take care of it now and have so much fun doing it.” She wants to travel the world to learn more about food and, one day, to open her own restaurants in Atlanta, Florida, Louisiana, and France.


Kids look up to Curry and line up to meet her after workshops or cooking demos. “I like how they seem so interested in me having my own business,” she says. “It has changed my thoughts about myself, and I believe that this could work for other children. You don’t have to wait until you’re older to find out what you want to do. You can start something now.”