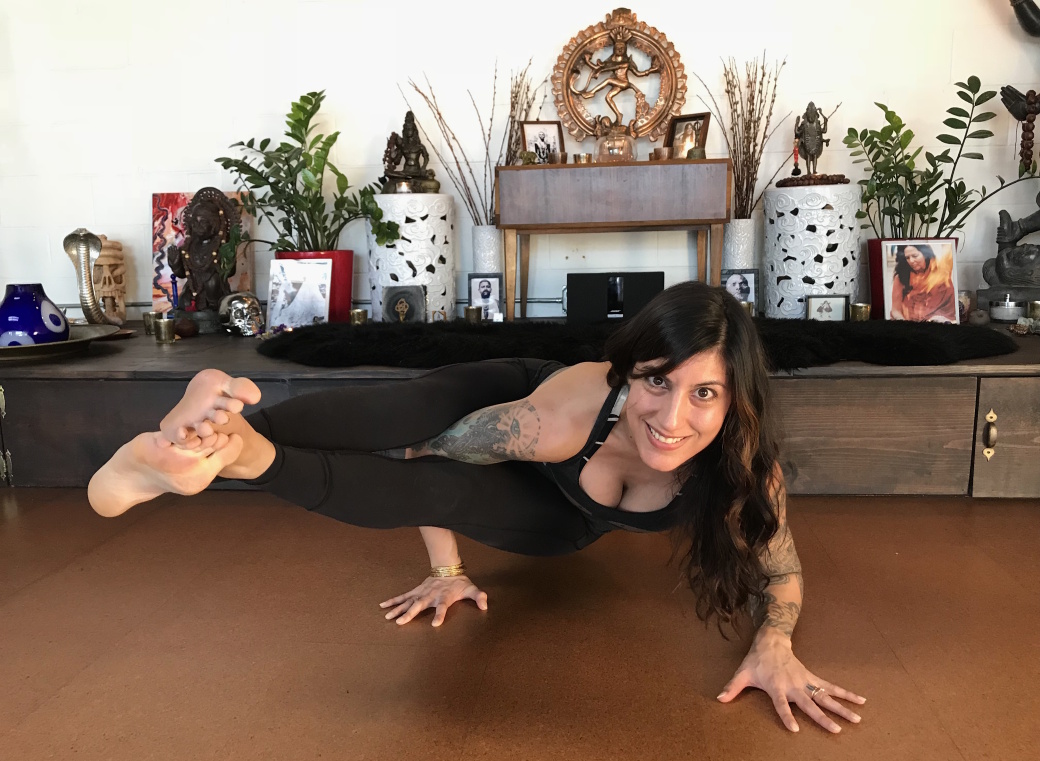 For nearly eight years, Neda Draupadi Honarvar has professionally honed the powers of the mind, body, and spirit while traversing the boundless middle ground between yoga and heavy metal music. Every Wednesday, Thursday, and Saturday, Metal Yoga classes at Tough Love Studio fill up with bodies stretched to their limits to the tune of grinding distortion and oceanic rhythms. The idea behind Metal Yoga has long been to lure into the studio those who wouldn’t normally consider yoga, and to show them new dimensions within themselves. For this month’s Fear Of Fear column, I stopped by Tough Love for some Saturday morning namaste time, and to talk with Draupadi Honarvar about finding balance amid chaos.

Chad Radford: Why do you bring metal to the yoga mat?

Neda Draupadi Honarvar: I have listened to metal for most of my life. Iranian families are pretty close, and when I was growing up, my parents threw big parties and all the kids were there. There was one kid about six years older than me, who listened to a lot of Metallica, Iron Maiden, Slayer. So that got me into it when I was maybe seven years old. When I got a little older I went to a lot of shows, and I practiced yoga to metal at home. I started teaching yoga at Kashi. It’s an urban ashram — a spiritual community — and the vibe is pretty chill. Generally, there isn’t music during their classes. In 2010, I wanted to do my own thing, but none of my friends would come to my classes. I tried getting a couple of my guy friends, whom I went to shows with, to do yoga. I asked, “What would it take?” They said, “If you play metal we’ll come.” So I started in September 2010. I had no other job, and it was like, if one person shows up I’ll make $10 and I can buy lunch. It was really fun, and it caught on.

In the beginning it was mostly folks who wanted to listen to metal, so I taught more of a beginners class. Now, we’ve been doing it for eight years. So we have a range of experience: people who know what they’re doing and people who are new. So I offer all levels and, over time, people become more proficient. I’ll play some Black Sabbath, some doom and stoner stuff, some Melvins. Most people who come don’t really care about metal. They come because they want to do yoga. A lot of people say they don’t notice the music after the first few minutes. That’s cool, because part of yoga is finding focus in the realm of chaos: If there’s chaos all around you, can you still focus on your breath?

There was a pretty atmospheric soundtrack today.

I usually curate the playlist to be kind of chill at the first, then build up, and then come down at the end. Today, we started with “Suspended In Light” by Neurosis and closed with “He’s Alive” from The Handmaid’s Tale … And then a track of om with harmonies from Music For Meditation.

Was there a trial-and-error process finding what music works and what doesn’t?

Oh yes. I started with what I knew would be good for yoga: Neurosis, Isis, stuff that’s more melodic. Then I got adventurous and played Judas Priest, Iron Maiden, I even tried Watain. A million years ago I used to DJ rock nights at MJQ, so I had some experience making mixes. After that I started coming up with themes around bands coming through town: “Watain’s coming, I’ll make a Watain playlist.” I went to a lot of shows back then. My health was good. I was teaching till 9:15 and then putting on jeans and going to shows.

You are the picture of health!

My health is much better now; I’ve had Lyme disease since 2009. I didn’t know what was happening until 2016. It caused all kinds of problems — my stomach completely shut down. It took a few years to figure it out. During that time I hibernated at home and taught. Now, I don’t go out as much as I used to, and I don’t drink like I used to.

You can control your situation with yoga?

Yoga is crucial for my joint inflammation. If I don’t practice, I feel terrible. And if I eat like shit, I feel like shit. It’s a blessing that this is my job. It’s my favorite thing to do.

How many regulars do you have now?

At least a couple hundred people each week. We have 40-something classes on our schedule, each has 10-50 people sign up. There are three of us who teach Metal Yoga regularly, and there’s a fourth who subs while I’m out of town — Carly Brown teaches Wednesday nights, Josh Jones teaches Thursday nights, and Greg Tinkle subs this class for me.

The music is so subtly worked in that it doesn’t draw attention to itself. It’s not a gimmick!

People ask why I don’t push Metal Yoga more. Part of it is because when we started, it wasn’t happening anywhere else. Now there’s metal yoga everywhere, and teachers say, “Stick your tongue out and scream!” I don’t want to be judgmental, but for me, this is about the practice. It’s not about acting a certain way. There are people out there pushing heavy metal yoga, so I just don’t push it. We’ve been doing it on these three nights for a long time. We’ll keep doing it and hope the right people find it. Most of it has been word of mouth, and that’s great. Our aim is to have people who are in here for the right reasons. Our community is pretty nonjudgmental. Everybody who comes is super chill, and people who come in with an attitude get weeded out because we don’t tolerate folks who aren’t being nice. This is hard work, you’re vulnerable, and it’s important for me that people feel comfortable and safe here.