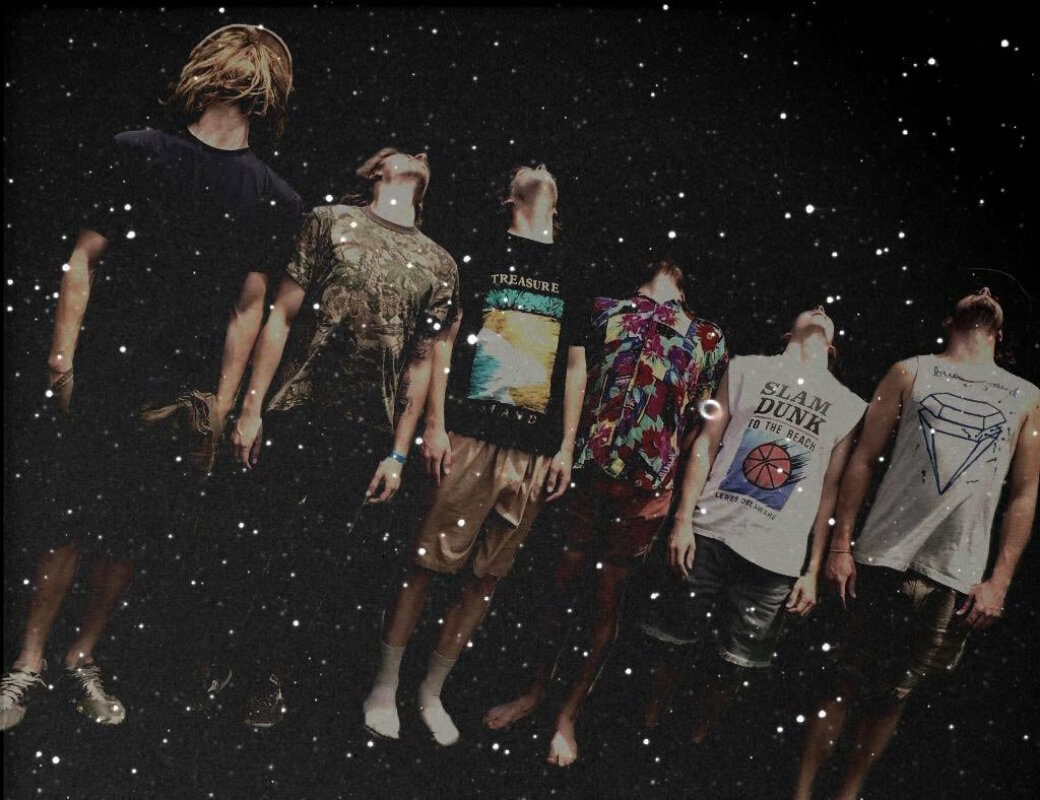 Photo credit: Rando
SPACE IS THE PLACE: Hello Ocho returns to Earth on Valentine's Day, probably for the last time.
By Lauren Leathers and Alex Patton Thursday February 1, 2018 09:45 AM EST

Hello Ocho has a weird way of showing love. One year after taking an unexpected hiatus, the group returns to defy indie-pop norms once again, this time on Valentine’s Day. What better day to show some weird love than the most awkward holiday of the year? “We always had a lot of fun playing Valentine’s Day shows,” frontman Chris Yonker says. “We always did them up real big.”

Hello Ocho became a favorite of Atlanta's underground music and arts scene circa 2010, when the group released its self-titled debut EP. With a lineup featuring Yonker (vocals/guitar), Christian Shepherd (synths/vocals), Clinton Callahan (bass), Chris Childs (vibraphone), and John Gregg (drums), the group crafted manic rock songs steeped in thrashing pop and dreamlike serenity. Look to the stylistic and emotional roller coaster ride of 2017’s “Tear Wagon” for just a taste of the group’s balanced rhythms and mental divergence in the name of art and rock. While Yonker slaps the guitar with a bassist’s demeanor and Gregg’s multifaceted percussion is evident, an eccentric passion is displayed in every move the group makes. Part of the Hello Ocho concert experience is hearing raw versions of songs that never appeared on an album, making each show an exclusive and intimate experience.

Since taking a break, Gregg has moved on to live in Cleveland, Ohio, and will soon be a married man. Gregg met his fiancé at a Hello Ocho show, and the group is playing the Valentine’s Day reunion show as a nod to their marriage.

The rest of Hello Ocho’s personnel continue playing in other groups around town. In addition to being co-owner of Mammal Gallery, Yonker now plays bass for experimental pop quartet Karaoke. Childs has embarked on a burgeoning career composing modern classical music. Still, Hello Ocho left a lot of unfinished material behind. In 2016, the group’s sound engineer, Ben Price of Studilaroche, was severely injured in a bicycling accident, holding up the release of an album that was almost complete. The album is still untitled, but the group hopes to see it released in 2018.

Yonker says that since the band ceased playing together, it lacks the funds needed to release what’s recorded. Now that Price is back on his feet, Yonker hopes to use money from the reunion show to help cover the costs of releasing the material postmortem. “It’s just sitting there not doing anything, and it would be nice to get it out there,” Yonker says. “A lot of people know some of those songs already, since we’ve been playing them live for a little bit.”

The return of Hello Ocho will feature cameo appearances by fellow Atlanta artists Adron and Mick Mayer of Red Sea. The show also doubles as the return of another long-defunct Atlanta act, Christ, Lord. While the original Hello Ocho lineup was touring behind its self-titled debut album, the group cultivated a deep and shared infatuation with Christ, Lord. Led by Christian Shepherd’s soaring voice and accordion, Christ, Lord developed a highly stylized blend of vaudevillian gypsy-folk songs that came to a peak with the arrival of the 2010 album, Magnalia Christi, and a live LP recorded at Criminal Records in 2012.

When Hello Ocho and Christ, Lord toured together, they would often form one large ensemble dubbed Ocho Lord, reaching deeper into the experimental nuances of Hello Ocho’s subtle chaos and Christ, Lord’s dark undertones. Both groups complement each other well, pushing the boundaries of art pop and psychedelic folk music. “When I found out that Christ, Lord might be doing a reunion with us, it made me really excited about doing the show,” Yonker says. “It’s the full original Christ, Lord lineup together.”

After Christ, Lord played its final show in 2014, Shepherd began playing synths for Hello Ocho as a full-time member, along with frequent collaborator Childs on vibraphone. This final lineup of Hello Ocho released both In Portuguese and The Slippery Hand EP in 2016.

Like most breakups, Hello Ocho’s separation was complicated, motivated by the struggle of time management with others’ projects. Gregg and Childs also play in Faun and a Pan Flute, which, at the time, was hard at work releasing its sophomore album, 2014-2016. Yonker adds that this will probably be the last show they play together, or at least until another special occasion prompts a reunion.

In the meantime, Hello Ocho and Christ, Lord are once again rekindling the flames, all of the spirituality, atmosphere, and weird love they’ve always fostered, and it feels more poignant than ever before.