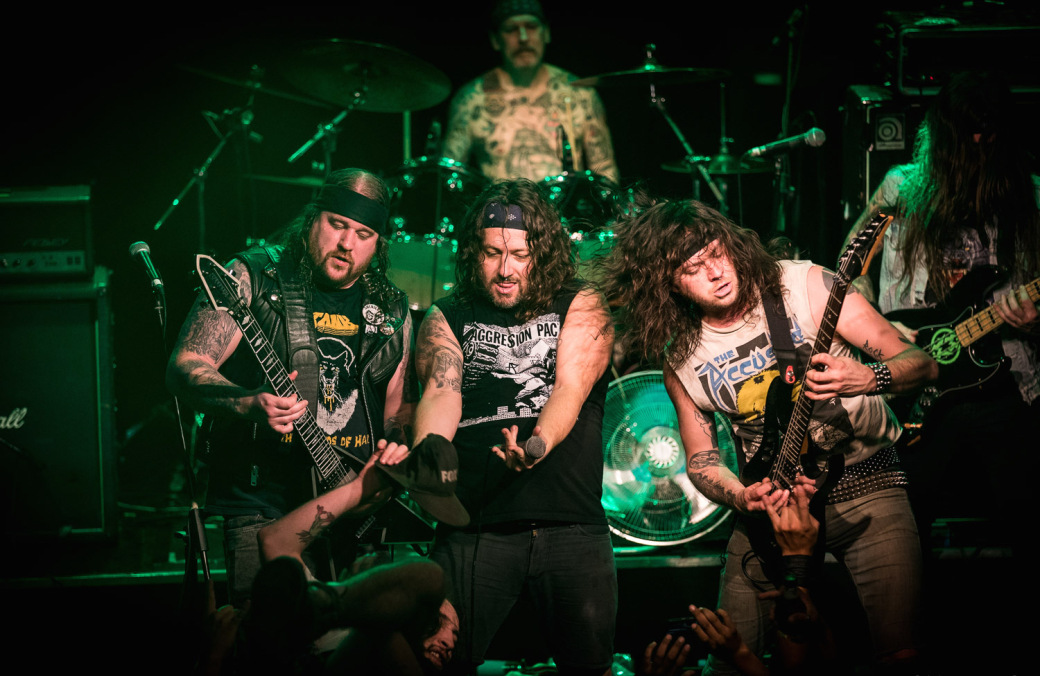 March Comes in like a lion as classic European and American thrash metal innovators bring headbanging fury to the city formerly dubbed “too busy to hate.” For this month’s Fear of Fear column, I sat down with A Rippin’ Production founder, Death of Kings drummer, and Records of Mass Destruction’s DJ Amos Rifkin to talk about the onslaught befalling the city. Rifkin is chief among Atlanta’s metal promoters; he’s a man of extreme taste in extreme music. For this list, I went back and forth with Rifkin culminating with a checklist of serious metal shows only — none of that Mac Sabbath poser BS!

10. 1000MODS, TELEKINETIC YETI, SASH THE BASH, AND THE BUZZARDS OF FUZZ This show had me at the words “Telekinetic Yeti.” If you know me, you know I’m down with all things Sasquatch. This Dubuque, Iowa, twosome does the legend proud with a full-throttle, mostly instrumental trek to the dark side of psychedelic sludge with its latest album, Abominable (War Crime). Sash the Bash is one of the more innovative guitar rockers in town as well; never pass up a chance to catch her live show. Grecian psych rockers 1000mods are blowing up in Europe and the States with an impressive visual show to go along with the riffage. In the interest of full disclosure, this show is an A Rippin’ production. $10-$12. 9 p.m. Thurs., March 1. 529, 529 Flat Shoals Ave. S.E. 404-228-6769. www.529atlanta.com. — CR

8. SEPTICFLESH, DARK FUNERAL, THY ANTICHRIST, AND PRIME MOVER Here’s your chance to catch some old-school European acts gracing the stage. Septicflesh brings a blend of atmospheric, symphonic death metal all the way from Greece. With roots that stretch back to Sweden, Dark Funeral is the ineffable king of black metal, one of the groups that matter. $22.50. 7 p.m. Wed., March 14. Masquerade, 75 MLK Jr. Drive S.W. 404-577-8178. www.masq.com. — AR

7. KREATOR, SABATON, AND CYHRA German thrash metal master Kreator returns playing songs from 2017’s Gods of Violence (Nuclear Blast). With 33 years of experience under their bullet-studded belts, Kreator is one of the old gods of thrash who will never lose their edge. Swedish outfit Sabaton comes to the States ready to wage war on anyone who stands in their way. $29-$52. 7:30 p.m. Sun., March 11. The Buckhead Theatre, 3110 Roswell Road. 404-843-2825. www.thebuckheadtheatre.com. — CR

6. ICED EARTH, SANCTUARY, AND KILL RITUAL A lot of people were surprised to see Sanctuary on the road after singer Warrel Dane’s untimely death last year. Armed with a tribute to the group’s late vocalist, the show promises to be a moving performance. $25. 7 p.m. Sat., March 17. Masquerade, 75 MLK Jr. Drive S.W. 404-577-8178. www.masq.com. — AR

1. MR. PICKLES THRASH-TACULAR, FT. EXODUS, MUNICIPAL WASTE, AND DEATH OF KINGS Named in honor of the secretly vile and murderous star of Adult Swim’s “Mr. Pickles,” this show ain’t for the faint of heart. Exodus is regarded as the originator of thrash metal — long before Metallica followed the group’s lead. Richmond, Virginia’s Municipal Waste keeps thrash metal alive in 2018. The group is currently touring behind its latest whiplash masterpiece, Slime and Punishment. Local headbangers Death of Kings brings local flavor to the stage. Hide your children, lock your doors, and pray for the sun to rise again when the onslaught ends. $24. 7 p.m. Sat., March 10. Masquerade, 75 MLK Jr. Drive S.W. 404-577-8178. www.masq.com. — CR