Press play on Ministry's 14th studio album Amerikkkant, and embark on an ominous journey through the Orwellian nightmare that is 21st-century America. When frontman, producer, and reluctant godfather of industrial rock Al Jourgensen sings “Disgusted and depressed/We know the world is just a mess/Distortion of reality/The truth is under arrest” in “Twilight Zone,” the words are all too real.

It’s a last gasp for sanity, as President Donald J. Trump plunges the the free world deeper into the chaos of corporatocracy. Such disarmingly poignant words speak to even the most hardened listeners, many of whom abandoned Ministry nearly 25 years ago.

In 1996, the wrongfully vilified album Filth Pig veered away from the full-throttle industrial metal fury of 1992's Psalm 69: The Way to Succeed and the Way to Suck Eggs. Songs such as “Lava,” “Brick Windows,” and a somber cover of Bob Dylan’s “Lay Lady Lay” repelled those who clamored for a return to the synth-pop of the group’s 1984 12-inch single “(Every Day Is) Halloween,” and the 1986 album Twitch.

Time has been kind to Filth Pig’s massive dirges. But, the album is still a point of contention for Ministry’s old school diehards — a line in the sand.

A string of mid-aughts albums, including Jourgensen’s anti-George W. Bush trilogy — 2004’s Houses of the Molé, Rio Grande Blood in ’06, and The Last Sucker in ’07 — sealed the group’s fate as a Gonzo thrash band. Songs such “No W” from Houses of the Molé and “Lies Lies Lies” from Rio Grande Blood are visceral reminders of Jourgensen’s brilliance as a songwriter. But, Ministry had become a parody of the seductively harsh and malevolent force of nature that caught the world’s attention with 1988’s The Land of Rape and Honey, and The Mind Is A Terrible Thing to Taste in ‘89.

Redemption for Ministry came like a thief in the night. Amerikkkant arrived March 9 via the Nuclear Blast label. From the warped samples of Trump’s dummy one-liners, to the album’s massive drums and Jourgensen’s high and distorted banshee roar, Amerikkkant teems with renewed energy. Songs such as “Victims Of A Clown,” “TV5/4Chan,” and “We’re Tired Of It” are a distillation of all of Ministry’s highs and lows, channeled into a collection of songs that are alienated, powerful, and ready to fight the war on facts. Amerikkkant is a twisted, cathartic maze of haunting textures and blood-boiling political dissent.

If Jourgensen was merely being playful in his days spent poking at Dubya’s War on Terror, he’s genuinely aghast at the American hellscape that Trump has ushered in. And even though the album’s first single, “Antifa,” carries one of Jourgensen’s most cringe-worthy lyrics (“We're not snowflakes/We are the antifa), the raw power in the song’s guitar riffs wipe out any lingering apprehension over the group’s relevance.

To hear guitarist Sin Quirin talk about how the album came together, crafting an effectively bleak and disaffected experience that would resonate with a modern context meant distilling Ministry’s history and legacy without pandering to nostalgia.

“Because I’m such an old school fan, in the back of my mind, I’m always trying to bring that classic Ministry vibe to the new stuff,” Quirin says. “Sometimes I go a little over the top with it, and Al has to reel me back in. If it were up to me, though, we would dig even deeper — not duplicate what’s already been done, but dig into that old style in new ways.”

Quirin joined Ministry circa 2006, after being invited to El Paso, TX, to work on songs that ultimately became The Last Sucker. He’d met Jourgensen through former Prong, Killing Joke, and Ministry bass player Paul Raven. At the time, Quiring was in a band called Society 1, which had recorded some songs with Raven playing bass.

“Paul, may he rest in peace, was instrumental in introducing me to Al — that’s how I got my foot in the door,” Quirin says. 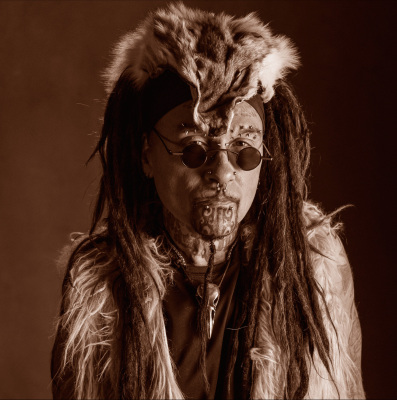 Through that relationship Quirin landed a gig playing guitar with a later version of Jourgensen’s Revolting Cocks side project, before traveling to the studio in El Paso, where Jourgensen lived at the time. “I went there with four song ideas,” Quirin says. “I was literally carrying my little Tascam 4-Track, and I went there just hoping to maybe get a riff on a Ministry record. I played one riff for him and he said, alright, go with that, and he just let me do my thing in the studio. That first riff I played for him became a song called ‘Death and Destruction.’”

Quirin ended up writing maybe half of what’s heard on The Last Sucker. Since then, he’s been one of Jourgensen’s regular collaborators, playing a key role in fleshing out 2012’s Relapse, and, following the death of longtime guitarist Mike Scaccia, 2013’s From Beer to Eternity.

On Amerikkkant, Quirin’s writing and guitar assaults reach a new creative high for the current incarnation of the group. But he’s quick to say that ultimately, Jourgensen is the creative, driving force behind Ministry. “Ideas have to start somewhere; there’s always a blueprint or a basis, and that’s where I like to see myself fitting in,” Quirin says. “The song ‘Twilight Zone’ — to give you an example — I wrote and recorded the demo in 2016. I wrote the didgeridoo intro, the bass line, and the initial riff that you hear throughout the song. Then [guitarist] Cesar Soto contributed some stuff. Then I wrote the ending riff in the studio as well. That’s generally what I bring to the table. Then Al rearranges it, adds samples, sounds, and does a lot of the coloring.”

When it comes to the business of making Ministry great again, rising above the horror and absurdity of American politics in 2018 lies at the heart of the album. But does taking aim at specific political situations and characters, such as Trump, give the album a limited shelf life? “No,” Quirin says. “Even though lyrics and imagery can be about a particular subject, it still can be open to interpretation. Even if you’re being blatant about certain things, I’m going to take something differently than you will,” he adds. Because of that, it can still be a timeless thing. We like to say we’re taking a snapshot of what we’re going through at the time. But you can always go back, and if you’re digging the music and how it made you feel, you’re always going to go back and dig on it.”

With Amerikkkant, Ministry’s snapshot of a world where a bush-league fascist has risen to power by means of confusion is rendered all the more distressing when Jourgensen repeats the lyrics, “Hope Is Lost” in the song “We’re Tired of It.” Such a soul-crushing admission becomes empowering, thought, when placed next to a quote from author Chuck Palahniuk’s Fight Club in the album’s liner notes: “It’s only after we’ve lost everything that we’re free to do anything.”

This is when Ministry is at its absolute best.