Take the statues down 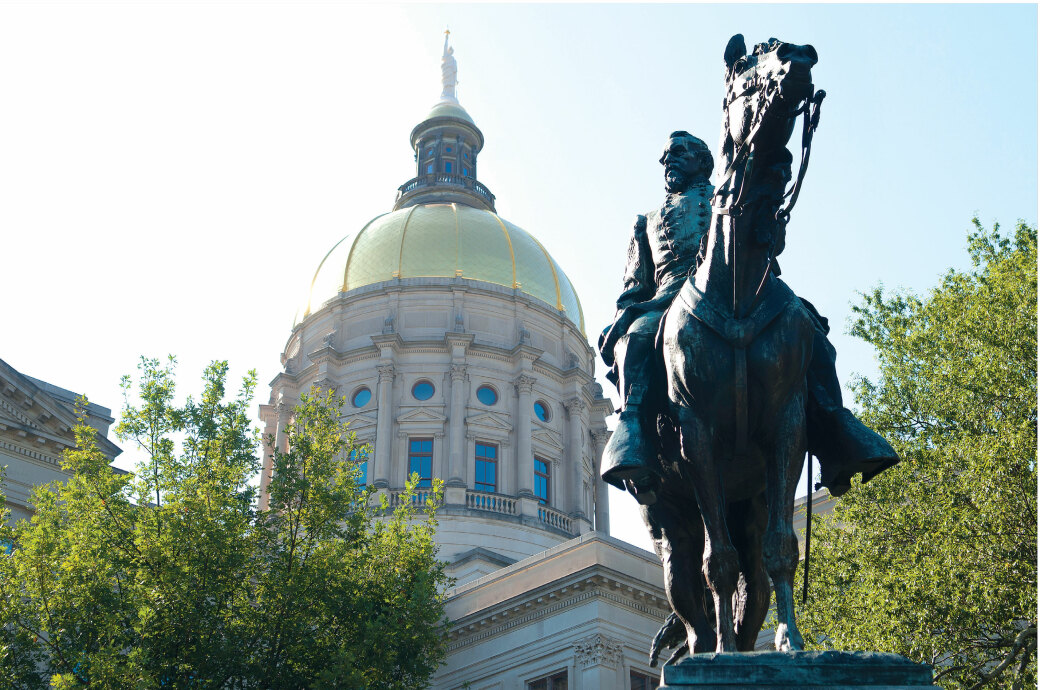 Last year, activist Heather Heyer was killed by a white supremacist at a “Unite the Right” demonstration in Charlottesville, Virginia. Heyer and other counterprotestors had come together to condemn a statue of Confederate Gen. Robert E. Lee. After Heyer’s death, the issue of who Americans choose to honor with monuments was thrust into the nation’s conscience once again. Here in Atlanta, four statues that ring our state capitol, the building that stands for our state’s democracy, are dedicated to individuals who fought for white supremacy throughout their lives. This is an embarrassment to all Georgia citizens.

Some people argue these statutes should not be taken down because they tell the story of Georgia history. But one must wonder, what kind of revisionist history do they tell when they fail to accurately represent or even mention these individual roles in advocating and perpetuating a system that led to extreme oppression, violence, and death for millions of Americans?


John Brown Gordon
One of the largest statues that stands at the Capitol pays tribute to Confederate Gen. John Brown Gordon. He is commemorated in his Confederate uniform and atop his horse, posed beneath the glow of the Gold Dome. Gordon commanded half of Gen. Lee’s troops during the Civil War and said slavery was “morally, socially and politically right.” During the Reconstruction era, Gordon was the Grand Dragon of the Ku Klux Klan for the state of Georgia. He called the Klan “a brotherhood of … peaceable, law-abiding citizens brought together for self - protection.” Gordon also served as Georgia’s governor and later its U.S. senator. Does a likeness of a former Ku Klux Klan leader — a man who fought for the enslavement of black people — belong in a huge heroic tribute in front of the building that represents democracy in our state?


Eugene Talmadge
“A safe but progressive administrator of public trust,” is engraved beneath the statue of former Gov. Eugene Talmadge at the east side of the Capitol. Talmadge served three terms as governor and won a fourth term, but he died before taking office. In 2007, newly released FBI files linked Talmadge to the infamous Moore’s Ford Bridge lynching. Referred to as America’s last mass lynching, the brutal events at Moore’s Ford Bridge in Monroe, Georgia, took the lives of two African- American couples. A witness told the FBI Talmadge offered immunity to anyone “taking care of the negro” during a 1946 campaign stop.

And before that, in 1941’s “Cocking Affair,” Talmadge ousted University of Georgia Dean William Cocking because of his attempts to integrate the university. Talmadge accused the professor of taking money from the Rosenwald Fund, which funded projects to improve education for black people across the South, and referred to the organization as “Jew money for niggers.” Talmadge’s firing of Cocking led to one of the worst crises in Georgia’s higher education history. “Before God, friend,” Talmadge said during a stump speech, “the niggers will never go to a school which is white while I am governor.” Is there really no
one in Georgia history more deserving of a statue outside our state capitol? 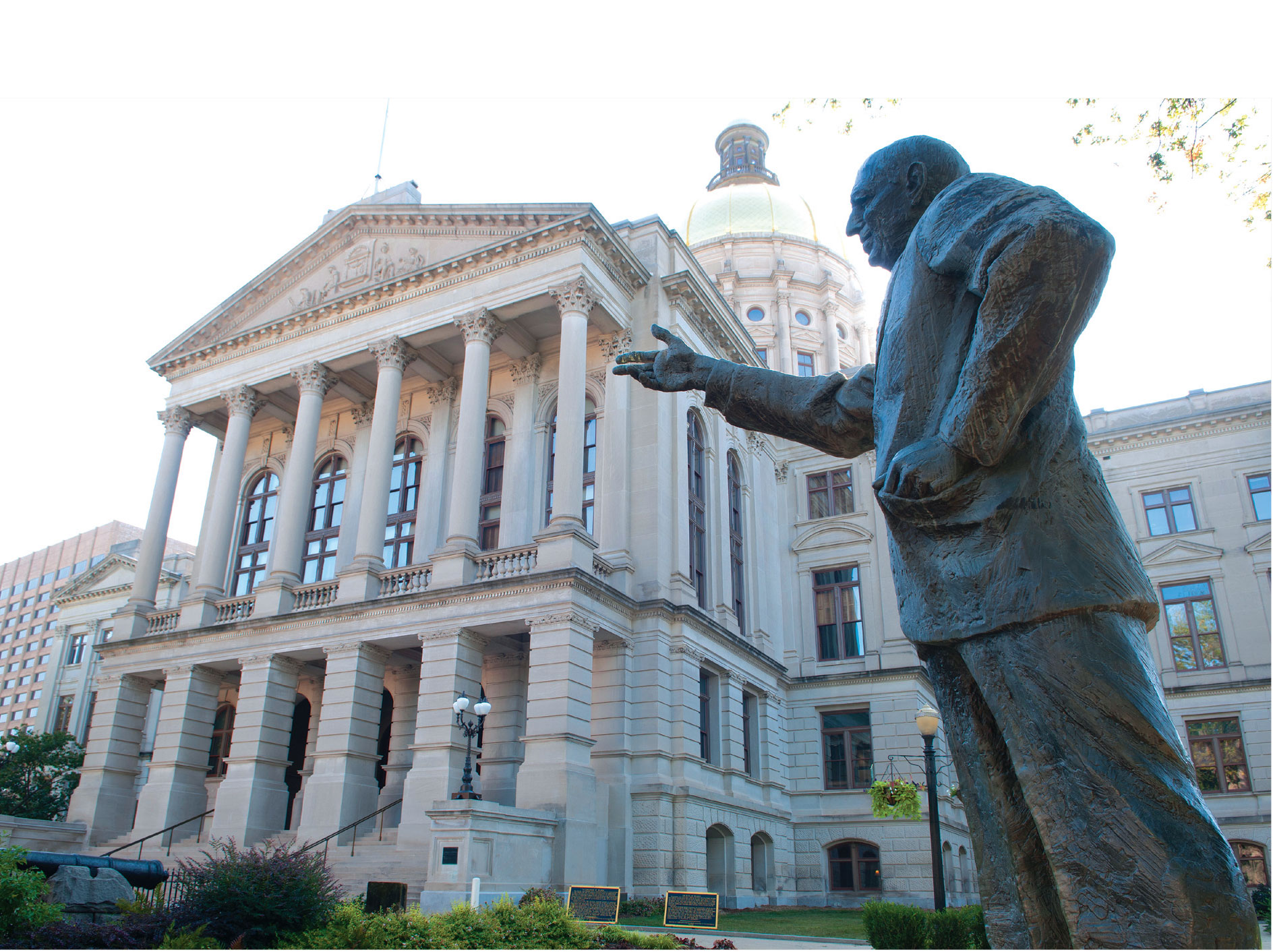 
Richard Russell
The larger-than-life statue of former Georgia Sen. Richard Russell on the west side of the Capitol looks like it’s holding up the Gold Dome. Russell was a senator from 1933 to 1971. He worked vigorously against civil rights throughout his career. In 1936, when he was challenged by none other than Eugene Talmadge for his senate seat, Talmadge accused him of supporting programs that would lead to racial equality — Russell responded by declaring his dedication to white supremacy: “I am willing to go as far and make as great a sacrifice to preserve and insure white supremacy in the social, economic, and political life of our state as any man who lives within her borders.”
He kept his word throughout his career.

Russell opposed anti-lynching legislation in 1936 and is perhaps best known for his opposition to the landmark 1964 Civil Rights bill, which finally ended legal discrimination in public places, and outlawed employment discrimination. “We will resist to the bitter end any measure or any movement which would have a tendency to bring about social equality and intermingling and amalgamation of the races in our [Southern] states,” he said during a filibuster that failed to defeat the landmark legislation.

Of course, Russell’s statue includes none of this history. Instead, beneath his statue is a benign quote that misrepresents Russell’s views on race: “All of us of every race, creed, and political persuasion share a common heritage a written constitution,” it reads. In reality, Russell argued that the Constitution does not address segregation and racial equality. “I do not believe …,” he wrote, “our Constitution to compel one group to share its rights with another at the same time and in the same place against its will.” The truncated quote beneath Russell’s statue distorts the legacy of a man who dedicated his life to opposing equal rights for all races — and often cited the U.S. Constitution in the process.

Joseph E. Brown
The statue of former Georgia Gov. Joseph E. Brown and his wife was installed at the Gold Dome in 1928, more than three decades after he died. Smith, a strong supporter of the Confederacy and of slavery, was a millionaire who made huge profits using black convicts for labor for his coal mining business. He feared that the end of slavery would lead to racial equality and the mixing of races. He also served as a justice on Georgia’s Supreme
Court during which he wrote an opinion that upheld the states’ ban on interracial marriage, writing that such marriages were “productive of evil, and evil only, without any corresponding good.”

How can these statues remain standing outside our capitol, a building that represents democracy for all of Georgia’s citizens? Change can happen. It is not unprecedented for a culture to remove monuments that celebrate a system that oppresses its people. South Africa did it. Nazi Germany did it. More recently, and closer to home, the statue of Thomas E. Watson — a man who defended the lynching of African-Americans, and championed the hanging of Jewish Atlantan Leo Frank — was removed from the front entrance of the Georgia Capitol in 2013 after more than 80 years. And in August 2017, almost 50 years after his murder, Martin Luther King Jr. was finally honored with his own statue outside the Capitol in his hometown. But still, statues celebrating some of the most hateful characters in Georgia history remain. While there are other monuments around the state that are equally offensive, the Capitol supposedly represents our “democratic” system of government. Taking down statues of white supremacists at our Capitol will not change our past, but what exactly is the message we are sending when our state Capitol building is surrounded by monuments celebrating racists who fought to preserve slavery, lynching, and segregation?

'Confederate Memorials: De-Mythologizing the Iconography of the South'

09/11/2017 7:00 PM
In the wake of heated and even violent debates over Confederate memorials, the Atlanta History Center is holding a panel discussion led by several Southern history scholars. Panelists will include writers and professors from Georgia State University, Auburn University and others. The event is free, but reservations are encouraged. This event continues an initiative the Atlanta History Center started after the tragic shooting at Emmanuel African Methodist Episcopal Church in Charleston. Margaret Mitchell House & Museum, 979 Crescent Ave. N.E.
—Read Article
News & Issues Home
dummy